Is insulation the climate solution our buildings need? 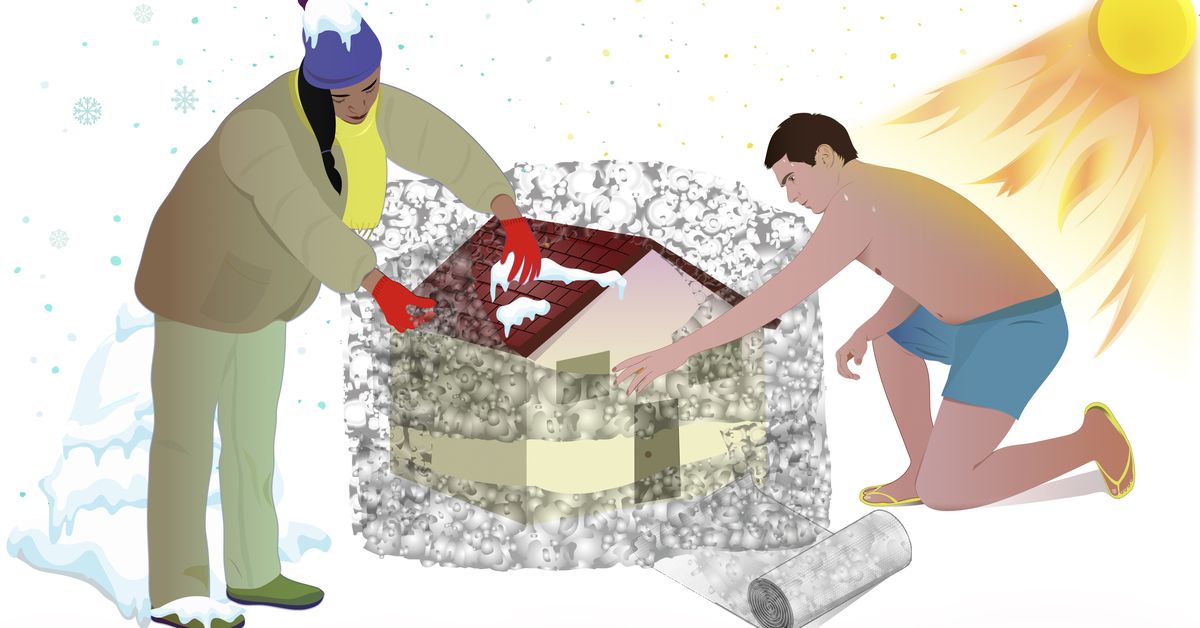 
This story is part of Recode by Vox’s Tech Support series, which explores solutions for our warming world.

The world is buzzing with climate change solutions these days: Maybe we can plant a trillion trees to save ecosystems and scrub greenhouse gases out of the air in one fell swoop! Or store energy in giant cement blocks that can act like batteries made of potential energy! Or use our electric vehicles as batteries for our homes and businesses! These sound like promising ideas, but some are only in the early stages. Many of them will take years to come to fruition, if they ever do at all, and there’s a fair amount of disagreement about how effective some of them would be. Which is why it’s time we start thinking more about a low-tech, time-tested, and far less sexy solution: insulation.

Buildings are responsible for 40 percent of energy consumption in the United States, more than half of which goes toward heating and cooling. With the majority of the country’s energy still coming from fossil fuels, reducing that energy consumption would have significant climate impacts. According to the Natural Resources Defense Council, residential energy efficiency could be the largest source of reduced greenhouse gas emissions in the US, and a 2016 study showed that increasing insulation in all the single-family homes in the country would lead to annual reductions of 80 million tons of carbon dioxide from power plants. That amounts to about 4.7 percent of the annual carbon emissions from American power plants, or the equivalent of taking 15.6 million gas-powered cars off the road. The reduced energy needs would make it easier for utility companies to transition to clean energy, and as the latest alarming Intergovernmental Panel on Climate Change report makes clear, every bit counts.

“Efficiency is one of those things that people don’t think about a lot, but actually it’s huge,” said Victor Olgyay, principal architect in the carbon-free buildings program at RMI, a think tank that studies sustainability. Olgyay, as his title might suggest, happens to be the kind of person who does spend a lot of time thinking about efficiency, and he has firsthand experience with the difference a little insulation can make. After he and his wife Kristy bought a 1950s-era ranch-style home in central Boulder, Colorado, in 2004, they found that the house, being as old as it was, wasn’t very good at staying warm in the Colorado winter. Rather than crank the heat, Olgyay reached for the fluffy stuff.

Insulation works on a simple concept: It keeps the outside out and the inside in. “The primary purpose of a building is to provide shelter,” Christoph Reinhart, director of the building technology program at MIT, told Recode. “Being thermally separated, reducing conduction, is always good.” A well-insulated building isn’t just good at staying warm; insulation also keeps indoor spaces cool for longer, without using any extra energy.

Take Olgyay’s own house. After spending a few weekends stuffing fluffy insulation into the attic, filling wall cavities and gaps between floor joists, wrapping air ducts and water pipes in the crawlspace underneath the house, and sealing gaps around windows and doors, the ranch home became fairly airtight. That means that in the winter, heat from the furnace will stay inside the house — which means the furnace will run less often. In the summer, Olgyay’s family can open their windows at night to let in the cool air and shut them during the day to keep out the heat. With the addition of a small rooftop solar panel system installed in 2007 that could provide most of the power they needed, their only major reliance on utility companies — and on fossil fuels — came through the couple hundred dollars they spent on their gas bill each year.

Few buildings in the country are as well-insulated as Olgyay’s home. As Vox’s Umair Irfan wrote in a 2019 story detailing the poor state of insulation around the country, commercial buildings waste 30 percent of the energy they consume, while 90 percent of American homes are under-insulated. That can have serious consequences beyond the climate impacts, directly affecting the people living in these homes: A 20-year study published in 2021 found that global heat-related deaths are on the rise, with more than 5 million deaths each year attributed to extreme heat or cold.

Improving insulation, Olgyay says, can increase the “passive survivability” of a building, or the length of time buildings stay at a comfortable temperature without power. That’s particularly important as extreme weather is on the rise across the country, bringing power blackouts in its wake. The majority of deaths in New Orleans in the wake of Hurricane Ida, which hit the city in the summer of 2021, were attributed to residents being trapped inside their homes without air conditioning; 161 deaths in the wake of a winter storm that caused mass blackouts in Texas in early 2021 were attributed to exposure to the cold.

So the solution sounds simple, right? Just add some insulation into our walls, make buildings more comfortable and more climate-friendly, and call it a day?

Sadly, it’s not quite that easy. To begin with, most existing building owners — whether of single-family homes, apartment buildings, or commercial spaces — tend to think of the structure of their buildings as mostly fixed, and the prospect of padding attics with insulation or drilling holes into walls to blow insulation into the gaps between studs is daunting and expensive. Homeowners, Reinhart said, are more likely to focus on energy-efficient improvements like LED bulbs or new refrigerators that can be easily swapped in and out without major renovation work.

“It’s really disruptive to insulate in most cases,” Reinhart told Recode. Part of the problem is that if a house already has some insulation, even if it isn’t very efficient, removing it to make space for new insulation is very difficult — something Reinhart is hoping to find a solution for that wouldn’t require extensive renovation work.

The expense also means making improvements to insulation is only an option for people with enough disposable income to cover the cost without government assistance. The US Department of Energy does have a Weatherization Assistance Program for low-income households that’s meant to help with the cost, though the funds are administered at a state and local level and require homeowners to jump through bureaucratic hoops to receive assistance. And renters — who make up about 36 percent of the nation’s households — are left at the mercy of their landlords. “The rental situation has what we call a split incentive,” Olgyay said. “You’ve got people living there who are usually paying the utility bills, and then you’ve got a landlord who doesn’t see that and so has no incentive to improve the efficiency of the place.”

Commercial buildings waste 30 percent of the energy they consume, while 90 percent of American homes are under-insulated

Some groups, like the Institution for Market Transformation, a nonprofit that advocates for the role of buildings as environmental and societal solutions, have proposed the idea of “green leases” that would incentivize landlords to increase the sustainability of their buildings. The idea, essentially, is that landlords will spend money to make their buildings more energy-efficient, and the cost savings the tenants might see from reduced utility bills would instead go to the landlord to pay for those upgrades. There’s little agreement on how those leases should work, however; unless landlords across the country were to suddenly become exceedingly concerned about climate change of their own free will (and tenants, in turn, were to agree to higher rents in exchange for lower utility bills), green leases would probably need some sort of governmental push to become a reality.

It’s also important to think about how we should insulate our buildings as they are constructed. The amount of insulation put into a building is usually decided by a timeline of how quickly the insulation’s benefits will recoup the upfront cost, Olgyay said, and building codes tend to focus on quicker cost recoupment rather than high energy efficiency. “What that doesn’t really account for is the ability to have deeper cost savings,” Olgyay told Recode. If new buildings were constructed with more effective insulation, they would need to use air conditioners and heaters less often — saving more energy and money in the long run.

Builders also need to start thinking about how their buildings impact the environment simply by being constructed, Olgyay said. According to a recent report Olgyay co-authored, at least one-quarter of the carbon emissions of buildings come from the construction process, part of which comes from the nature of the materials used in constructing those buildings. Those materials essentially lock in a building’s carbon footprint from the very beginning — a concept known as embodied carbon. Insulation is a good example of this: Most insulation used nowadays is made from plastic, making it high in embodied carbon. Switching to insulation with low or no embodied carbon, such as insulation made from organic materials like cotton or cellulose, would reduce a building’s embodied carbon by 16 percent without any increase in costs.

All of these fixes would require us to change how we think about insulation, or to start thinking about it in the first place. But it’s time, Olgyay and Reinhart told Recode. Improving building insulation — and pairing those improvements with other technologies that would reduce the use of fossil fuels, like rooftop solar panels and electric heat pumps — is key to reducing greenhouse gas emissions. Better buildings will need to be more efficient down to their very bones.

“It’s just an integral part, the insulation,” Reinhart said. “If you have this vision of a great future for society, you need the insulation too. You can’t sidestep that.”