Depths of North Atlantic ocean once as warm as the Mediterranean 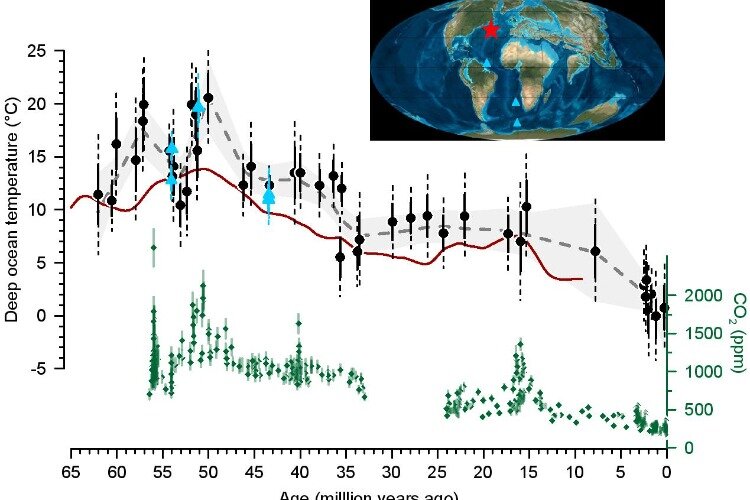 
A new study of ancient ocean temperatures, published today in Science, shows that the deep North Atlantic Ocean was once 20°C (68 °F)—warmer than the surface of the modern Mediterranean.

Scientists say the new data, spanning the last 60 million years, show the huge impact of higher CO2 levels in the geological past, and stress the urgent need to avoid continued CO2 rise in the future.

“Today the deep ocean is filled with icy cold waters,” said Dr. James Rae from the University of St Andrews, who co-authored the study, “but 50 million years ago it was as warm as the Mediterranean is today.”

The international team, including scientists from Norway, the Netherlands, Switzerland and the U.S., used the chemical fingerprints of tiny fossil shells from deep-sea mud cores to reconstruct ancient ocean temperatures. Using state-of-the-art new laboratory measurements, they were able to obtain the most accurate temperature estimates to date, showing that temperatures were warmer—and more variable—than previously thought.

Professor Nele Meckler, of the University of Bergen, who led the study, explained: “We looked at the way that different atoms of carbon and oxygen were clumped together in these ancient shells, which turns out to be a really accurate method of working out the temperature at the time the shells were formed.”

Dr. Phil Sexton, a co-author of the study from the Open University, added: “Because mud and shells continually pile up on the seabed, a long tube of this mud—up to 3 km long—is like a time capsule. As you go deeper down the core, the older the fossil shells, and by measuring the shell chemistry we get a long record of past climate change.”

The temperatures of 20°C for the deep North Atlantic come from a time called the Eocene, about 15 million years after the end of the dinosaurs, when atmospheric CO2 was around three times higher than today. Previous fossil indicators have shown that this time was characterized by super warm temperatures, with palm trees and crocodiles inhabiting the Arctic, and the new study shows that this extreme warmth was also felt in the depths of the ocean.

Dr. Rae said: “These ancient greenhouse climates may seem a long way removed from today, but they are critical in helping us understand the impact of CO2 on climate change.”

He added: “Although these super-hot greenhouse climates occurred a long time ago, they are critical in helping us understand the impact of CO2 on climate change in the future.

“CO2 has transformed the face of our planet before, and unless we limit emissions as soon as possible, it will do it again.”

Citation:
Depths of North Atlantic ocean once as warm as the Mediterranean (2022, July 6)
retrieved 6 July 2022
from https://phys.org/news/2022-07-depths-north-atlantic-ocean-mediterranean.html

Delta-8 THC is one of the most talked-about...
Read more
Previous articleA three-legged tortoise fitted with rollers could help save his endangered species
Next articleClimate Change Plays Role in the Distribution of Holoparasitic Plants