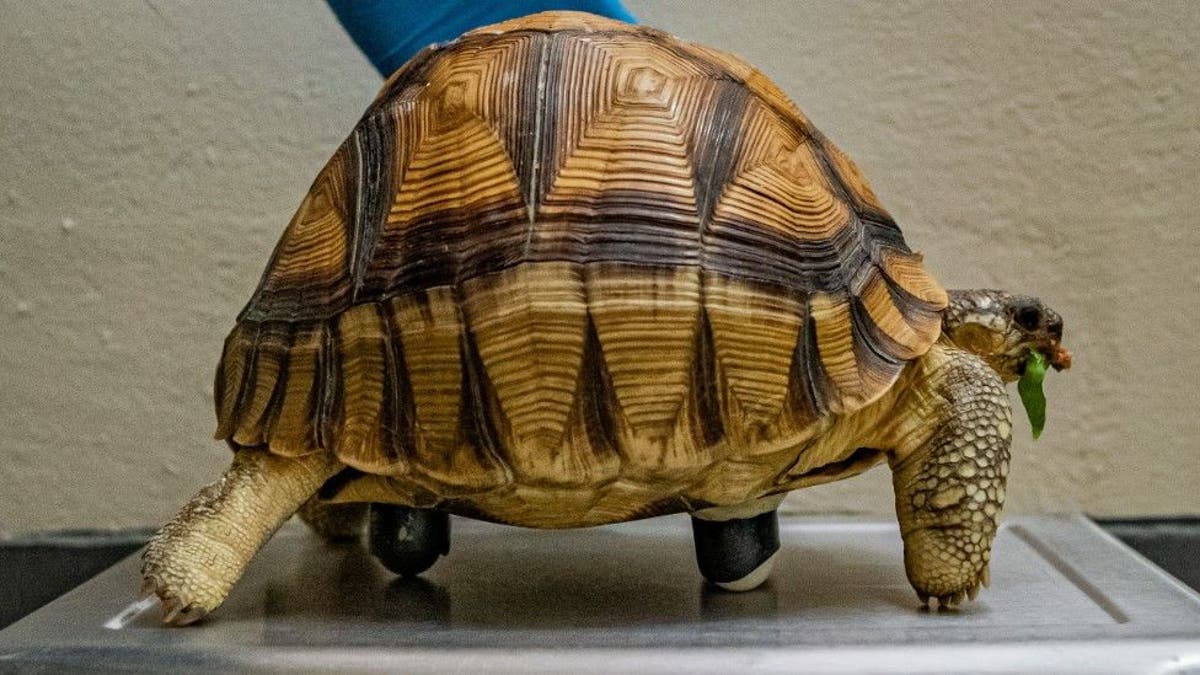 three-legged tortoise rescued from smugglers has found a new lease of life at Chester Zoo, where he could help save his endangered species.

Hope, a ploughshare tortoise, was found in a suitcase by Hong Kong customs officers in 2019, alongside 56 other endangered tortoises.

Ploughshare tortoises are the rarest type of tortoise in the world. There are fewer than 300 living in the wild–in their native Madagascar–and only 63 living legally outside of the East African island country.

According to the Convention on International Trade in Endangered Species (CITIES), ploughshare tortoises have been categorised as Critically Endangered on the IUCN Red List of Threatened Species since 2008.

In 2016, CITES said there had been a “significant increase in the level of illegal collection and trafficking of this species to supply the high-end pet trade” in the previous five years.

The rare animals are known for their distinctive gold and black shells and sell for “exceptionally high prices” on the black market, according to a Chester Zoo spokesperson.

The smuggler responsible was a man from the Comoro Islands in East Africa who was later jailed for two years.

After being rescued, Hope–who is missing a front leg–was fitted with rollers at an animal rescue centre in Hong Kong, to help him balance.

He was then brought to the UK, where he currently lives at Chester Zoo with three other ploughshare tortoises

His rollers were modified at the zoo and he now “moves even quicker” than his neighbours.

The zoo’s Dr Gerardo Garcia said Hope was “an incredibly special tortoise,” with “a remarkable life story”. And he may just help his species survive.

Hope will join the zoo’s breeding programme, to create “a genetically viable safety net population and prevent its extinction,” according to Director of animals and plants Mike Jordan.

As reported by the BBC, Jordan said Hope was “such an important addition to the zoo”.

He said the species was “sadly under huge pressure for its survival” and there was a “very real possibility [it] could be lost forever.

“We refuse to sit back and see this incredible species disappear.”

Age Hammeken Danielsen has hunted narwhals since he...
Read more
Previous articleCapturing California’s biodiversity for the future of conservation
Next articleDepths of North Atlantic ocean once as warm as the Mediterranean