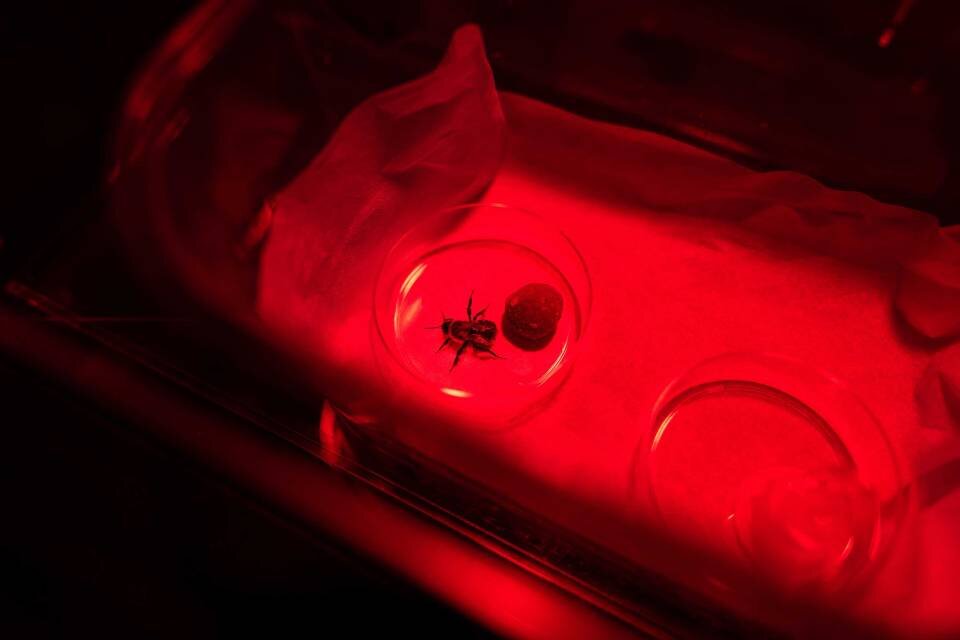 
A new study shows that social isolation changes the behavior and brain development of bumblebees, but not in the way researchers expected.

The study explored how bumblebees, which depend largely on their social instincts for survival, were affected by being socially isolated during a key developmental period.

The researchers were surprised to find that the isolated bees blossomed into social butterflies, exhibiting an increase in affiliative, or “friendly,” behavior—the opposite of what they predicted. The paper detailing the results was published on May 17 in Current Biology.

The team, led by Sarah Kocher, assistant professor of ecology and evolutionary biology and the Lewis-Sigler Institute for Integrative Genomics, performed a series of tests on three groups of bumblebees. Some of the bees were isolated, some remained with their original colony (colony-reared), and some were housed with a smaller group of bees (group-reared).

The research team expected that, as had been previously shown with a variety of organisms, bumblebees who were socially isolated would exhibit more aggressive behavior and interact less with their social partner.

“Contrary to that, we did not see an increase in aggressive behaviors in bumblebees,” said Yan Wang, a postdoctoral researcher in Kocher’s lab. “In fact, we saw an overall increase in affiliative behavior.”

“Because insects and vertebrates share a common evolutionary ancestor, many of the same molecular mechanisms shape the brains of both groups,” Kocher said. “As a result, many of our findings in bees could also extend to vertebrates.”

This is why Wang, who has a doctorate in neuroscience, was interested in joining the project.

“The bumblebee has emerged as a really wonderful candidate for developing a lot of cutting-edge tools for studying sociality, as well as brain science,” Wang said.

Another surprising twist was that the results from comparing the brain development of the bees that were housed alone versus in a group were astonishingly similar, showing that having only a few other bees to interact with is sufficient for them to develop the same level of social skills as if they were with an entire colony.

The isolated bees, however, had results that were “all over the place,” according to Wang, and were much more random than the researchers expected in terms of the size of various regions of the brain and gene expression.

“What our results are pointing to is that, in the absence of that social environment, there is kind of controlled chaos in terms of how the brain might develop,” Wang said.

The researchers also identified six genes that were different in the brains of the isolated bees as opposed to the group- and colony-reared bees, several of which involve the same molecular mechanisms that are found in humans and other vertebrates.

Currently, the team’s leading hypothesis for the increased levels of sociality in isolated bumblebees is that they never learned how to not be reactive to others.

“In a crowded bumblebee hive, it makes sense that you’d need to be able to just keep doing what you’re doing even if there’s another bumblebee right next to you,” said Grace McKenzie-Smith, a graduate student in physics. “So social development might involve learning when not to react to the presence of another bee.”

This is just a hypothesis, and to truly get to the bottom of this will require more research.

Kocher said that this study also opens a path for understanding how bees and other pollinators may be impacted by climate change.

“Changes in the environment, social or otherwise, can have surprising impacts on behavior,” Kocher said. “The larger framework would be understanding how unexpected environmental changes can shape behavior, and how this affects pollinators’ responses to changing climate.”

An assist from motion-mapping software

Figuring out how to separately house over 300 bees in a tiny lab room was a challenge, and the team went through many iterations of trial and error before they found a set-up that would work. What they ended up with was a structure that the researchers started calling the Bee Hotel.

Each of the bumblebees was housed in its own private space—a small box in a series of other small boxes stacked together. The structure left each bee or small group of bees free from any disturbance caused by the sight, sound, smell or vibrational signals that might be sent from other residents.

After a carefully timed nine-day staycation, the team began collecting data on all three categories of bees.

They conducted tests that analyzed the gene expression and physical size of various regions of the bees’ brains and placed bees in Petri dishes to monitor their behavior both alone and in various pairs.

“Without SLEAP, we would have had to do all of the analysis by hand,” said McKenzie-Smith, who was responsible for much of the data analysis for this project. “And when you do that, you introduce a lot of human bias.”

The software—created as a collaboration between the teams of Princeton professors Joshua Shaevitz, professor of physics and the Lewis-Sigler Institute for Integrative Genomics, and Mala Murthy, professor of neuroscience—works by first having the researchers feed videos to the software of the animal it is supposed to track. It then uses artificial intelligence to identify various body parts, and provides frame by frame pixel coordinates for each body part.

After the bees’ body parts had been identified, the researchers used software called Motion Mapper, an earlier development from the collaboration between Shaevitz and Murthy, to extract dynamical information from the body part positions. This technique allows them to understand not just the locations of the bees’ limbs, but also how the bees are moving.

“Being able to take raw video and artificially mark different body parts later on makes this tool extremely versatile and really, really exciting to us in a social, multi-animal context,” Wang said.

One example of the affiliative behavior the researchers observed while using this technology was the bees rubbing their antennae on each other’s heads and bodies, an activity called antennating.

“Bees raised in a colony typically spend a lot of time in this head-to-head orientation,” Kocher said. “It’s a really important chemical cue. When they touch antennae, they’re actually passing chemical information back and forth, so they can get to know who the other individuals are in the colony.”

The bees that had been isolated, when re-introduced to another bee, did this far more often than the bees that were kept in social groups the entire time. And they did it in an unusual way, with a lot more variability in how they were touching each other.

“One way you could think about it is to imagine that you’re coming to shake my hand, but instead of shaking your hand, I try to shake your knee,” Kocher said. “It’s not really a meaningful social interaction for a bee with social experience. So I think that was a really interesting insight that came out of the study.”

The behavioral data obtained from SLEAP, as well as the analysis of gene expression and brain development in the bees resulted in surprising answers, and left Kocher with plenty of questions to ponder.

Is increased social interaction as a result of isolation common across social insects? Is this increase due to a lack of learning how to respond to social partners, or is it because the bees never learned how to avoid negative interactions? When in that developmental nine-day period do these changes occur, and are the changes permanent? Are they reversible?

All of these are questions that this project raised, and that Kocher believes may be worth further exploration.

“One of the things I am interested in would be a similar experiment, but in the hive,” McKenzie-Smith said. “Bumble bee hives have a complicated 3D structure that makes imaging them quite difficult, but there are some techniques being used in the computer lab right now that could get around that.”

A project like this could be valuable in order to get a sense for how social behavior develops more naturally in the bumblebee, and how it develops over the course of their lifetimes, according to McKenzie-Smith.

Citation:
Bumblebees kept in isolation make up for it by being more social later (2022, July 12)
retrieved 14 July 2022
from https://phys.org/news/2022-07-bumblebees-isolation-social.html

...
Read more
Previous article‘Water always wins,’ so why are we fighting it?
Next articleHarris to request $600M for ocean resilience in Pacific Islands