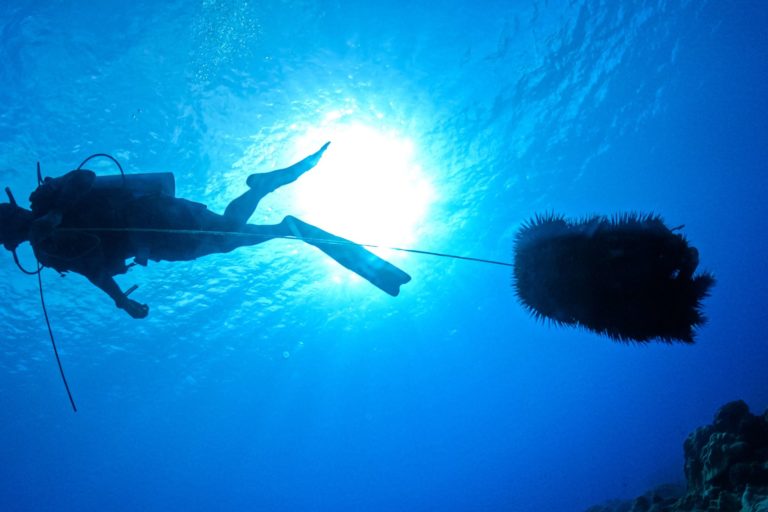 Adult taramea span 25-35 centimeters (10-14 inches) and are densely encrusted with sharp, venomous thorns. To eat, they slide their stomachs out through their mouths to digest the coral’s living tissue. When there are too many of them in an area, the rich colors and textures of a healthy reef are replaced by a dull seascape of coral skeletons, where few other species can survive.

Underwater, when the divers spot one of these coral-consuming predators, they slide their stick underneath to dislodge it, stow it in a mesh bag, and continue the hunt.

When the diving’s done, the team brings their catch ashore. Later, they’ll bury the starfish whole as fertilizer in gardens, compost, and under plantings of the native ‘ūtū (king banana, Musa troglodytarum). These gardens are part of the local environmental organization Kōrero O Te `Ōrau (KO)’s reforestation and food security project.

“It’s great to be out on the water so much – especially [when we have] very clear objectives,” said Winton Herman, a young volunteer for KO’s Project Taramea and marine biology student at Auckland Institute of Technology. The typical age range for certified divers in the project is 14 to 23 years-old.

“The more we do this, the more we learn about the taramea and its impacts and how it’s important that we take them out to look after our reef. What’s not so fun is getting pricked by them!” he told Mongabay in a group interview at the organization’s headquarters.

During the interview, the team’s camaraderie and enjoyment of the project were clear. But behind the laughter, there was also an urgent sense of purpose. If the local taramea population gets out of control, it could permanently destroy Rarotonga’s reef, “and these young people might not see it again,” said Teina Rongo, KO’s founder and the Cook Islands’ first PhD-level marine biologist.

Threat from the deep

Taramea normally reside in the deep ocean around Rarotonga, but over the past half-century, the island has experienced several outbreaks. The starfish invades the reef in large numbers and kills almost all of its coral. The first outbreak spanned 1968-1975; the second 1995-2001; and the current one began in 2019. The cause is uncertain, but it’s likely to be anthropogenic and influenced by factors such as nutrient runoff from agriculture and sewage and/or dwindling populations of the starfish’s natural predators, which include species such as the humphead wrasse (Cheilinus undulatus) and the whitespot pufferfish (Arothron hispidus).

After the first outbreak, the reef took about ten years to recover; after the second, it took twenty. A recovered reef in the Cook Islands has a high living coral cover – including large numbers of branching and table corals such as those of the Acropora genus, to which taramea are particularly partial – and diverse and abundant fish communities.

“Part of the reason we’re doing this now, and we’re really ensuring that we’re able to control it, is because there is no guarantee that this reef will recover if it dies – because of the previous experience [of increasing recovery time], alongside climate-change impacts like warming waters causing coral bleaching,” said Rongo.

The impacts for the island would be significant and multidimensional. The last time the reef died, it prompted an outbreak of ciguatera poisoning, a disease caused by eating reef fish contaminated with toxins from a type of plankton called Gambierdiscus toxicus. This plankton appears to thrive in dead coral habitats.

“During that outbreak, people started moving away from eating fish, and shifted their diets towards important goods and processed foods,” said Rongo. “With that came NCDs [non-communicable diseases] and everything else. So that’s the risk we face. Now, the reef is in a good state, fish poisoning has declined drastically, and people are slowly coming back to eating fish – and we want to encourage that.”

Taramea outbreaks have occurred regularly throughout the Indo-Pacific over the past fifty years, and their prevalence seems to be increasing – a fact that’s concerning to researchers and conservationists throughout the region.

“In the face of climate change, one of the most important things we can do is keep as much coral alive as possible,” said Sheriden Morris, the managing director of the non-profit Reef & Rainforest Research Centre in Cairns, Australia. “And that means controlling COTS [crown-of-thorns starfish].”

Despite the prevalence of the issue, there are few truly effective high-tech solutions for eradicating them: while an underwater starfish-killing drone called the COTSbot has been developed at Australia’s James Cook University, labor-intensive manual control remains the most efficient and widespread option. Within that, a range of strategies are used. On Australia’s Great Barrier Reef, for instance, divers inject the starfish with cleaning vinegar or ox bile, using a hypodermic needle on the end of a metal pole, and leave them to die onsite – a method that Morris praises for its safety and efficiency.

But the Rarotonga team prefers to collect the starfish and bring them onshore.

“It’s important to take all the metrics, on size and so on, as part of our monitoring process – and we can only do that if we remove them,” said Charlene Akururu, a project participant and intern at the Climate Change Cook Islands division of the Office of the Prime Minister. “And we can really only know the problem is removed if we take them out.”

When the project began in 2020, the team even eschewed scuba gear and simply free-dove for the starfish. But training up and certifying cohorts of young people in scuba diving offered a safer option for a broader pool of participants. Since then, the divers have honed their skills at finding and capturing taramea.

“We’ve gotten good at identifying corals that have been eaten, and then we know to search around those areas and more than likely we’ll find one,” said Herman.

“It also links into traditional knowledge, in terms of things like making connections to the weather patterns,” said Akururu. “For example, we observed that when the taramea start to hide, that’s a great indication that we’re going to get stormy weather; it’s kind of like how our ancestors used the sprouting of the breadfruit trees to indicate that there’s a cyclone coming.”

“As much as I’ve learned from university, I didn’t get much practical experience – next to no traditional knowledge or relevant learnings for the Cooks,” she said. “We don’t do tropical marine science in New Zealand; it’s a different ecosystem. This has been a great opportunity to apply tertiary knowledge in a local context.”

A generation of ocean guardians

At present, the team ventures out around twice a week to hunt taramea.

“We’re hitting it hard right now, before the summertime spawning months: thinning out the population to try to ensure spawning success will be compromised,” said Rongo.

So far, they’ve collected over 3,700 taramea. The outbreak isn’t over, but it’s contained to the island’s northern and western sides, and population density is now much lower than it was during the previous outbreak.

The team has also successfully managed an outbreak on nearby Mitiaro Island over the period 2019-2021, and in 2021 began addressing one on its neighbor, Mauke Island – including by training up local youth to free-dive safely for taramea.

Looking ahead, and with their work supported by leading international funders such as the EU’s Global Climate Change Alliance Plus (GCCA+) and Indigenous stewardship-focused Nia Tero, the team is motivated to continue the work for as long as it takes to bring the taramea population back into balance – and to upskill and equip its young divers with knowledge and know-how in the process.

“It’s given me a deeper appreciation and love for the ocean,” said Herman, “and how this ecosystem is very delicate: just a slight tip in the balance is all it could take to destroy it.”

Related listening from Mongabay’s podcast: We look at Indigenous peoples’ long relationship with, and stewardship of, marine environments through two stories of aquaculture practice in New Zealand and Canada.