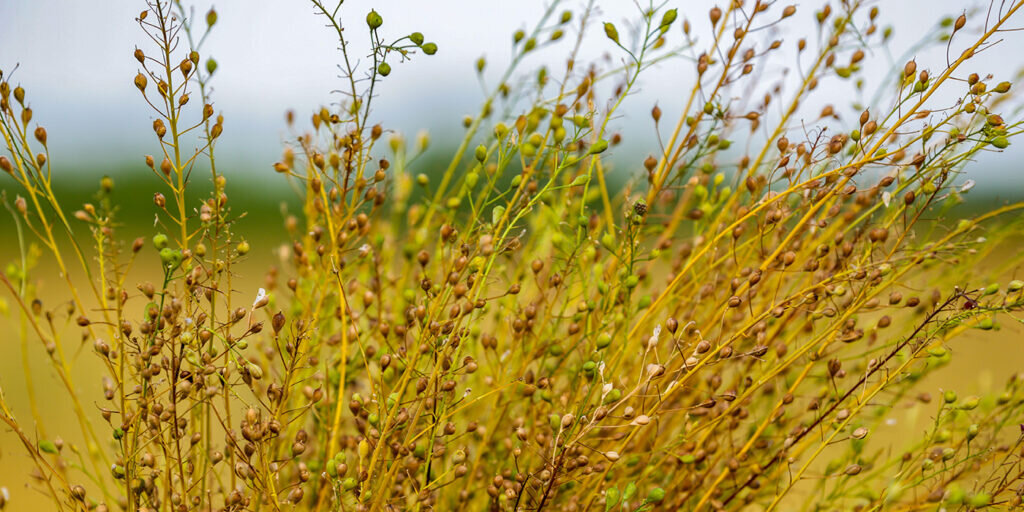 
Camelina, also known as false flax or Gold-of-Pleasure, is an ancient oilseed crop with emerging applications in the production of sustainable, low-input biofuels.

Multidisciplinary research from Washington University in St. Louis is revealing the origins and uses of camelina and may help guide decisions critical to achieving its potential as a biofuel feedstock for a greener aviation industry in the future.

Biologist Jordan Brock conducted several field expeditions to collect wild camelina during his time as a graduate student at Washington University, including one trip to Ukraine as a National Geographic Explorer.

“Especially valuable to me was seeing how rural people in Ukraine were continuing to grow camelina, a crop which had been lost throughout almost the entirety of Europe,” Brock said.

Camelina may have been a more important and widespread crop than previously thought, according to Brock’s new study in the American Journal of Botany, co-authored by Melissa Ritchey, a Ph.D. candidate in anthropology, and Kenneth M. Olsen, professor of biology, both in Arts & Sciences at Washington University.

“By using many lines of evidence, in this case archaeological and genetic, we can gain much clearer understandings of the history of crop domestication and trace the declines and increases in their use through time,” Ritchey said.

In this study, the researchers determined that camelina was likely domesticated from the Caucasus region near what is now known as Armenia, about 6,000 to 8,000 years ago.

Breeding programs to improve this crop for biofuels applications should take into account the high levels of genetic diversity present in its wild progenitor, Camelina microcarpa, in Western Asia and the Caucasus region, the researchers said.

Camelina’s history as a European oilseed crop is long, but in many respects poorly understood.

In early Iron Age archaeological sites, camelina seeds were kept apart from flax seeds in storage, indicating that they were cultivated separately. Camelina continued to be grown through the Roman empire and into the early 20th century.

Most Western European countries stopped cultivating camelina in the 1930s and 1940s, while crop scientists and farmers in Russia, Sweden and Denmark have continued to cultivate and conduct field trials with camelina.

For this particular study, the Washington University scientists used genotyping-by-sequencing of 185 accessions, or samples taken from a specific location, of Camelina sativa and its wild relatives to examine population structure within the crop species and its relationship to populations of its wild progenitor. In a complementary analysis, they surveyed the archaeological literature to identify sites with archaeobotanical camelina remains and assess the timing and prevalence of usage across Europe and Western Asia.

“The vast majority of data in archaeobotany comes from plant remains that are charred through burning,” Ritchey said. “Unfortunately, the high oil content of oilseeds like camelina lends to them not actually charring, but just becoming destroyed during contact with fire. However, I was still able to find a lot of data, which gave us the information we needed.

“There were also a number of camelina ‘cakes’ found in Viking and Iron Age sites in northern Europe which are really cool!” she said.

Ritchey also uncovered records of camelina from Gordion in Turkey, a UNESCO World Heritage site, and Kumtepe, a Neolithic settlement that is considered the oldest permanent settlement in the Troas, the region in northwestern Anatolia, where Troy was later built.

Archaeologists have long theorized that camelina was domesticated in the regions around Armenia, while plant geneticists had entertained different, competing hypotheses for the plant’s origins as a crop.

Ritchey said: “Through our analyses, we were able to test these hypotheses and provide a clearer consensus on the earliest domesticated appearances in Armenia.”

New-found interest in camelina has spurred a huge increase in molecular-based research on camelina and how to improve it.

The short season required for camelina cultivation, coupled with its low input requirements, means that it could be a valuable crop in areas with few alternatives. Camelina can be grown in marginal soils, which means that farmers may be able to take advantage of neglected or otherwise non-arable land to cultivate it.

These qualities could be enhanced through breeding or genetic modification. But a lack of diversity in modern cultivars of the crop makes this prospect more challenging.

“Unfortunately, the low genetic diversity present in modern cultivars is presenting challenges to breeders who are looking for genetic variation and agricultural traits (increased yield, higher disease resistance, drought tolerance, etc.), which they may use for breeding better camelina cultivars,” Brock said.

“Understanding the domestication history of camelina is an important and timely discovery because this effort has identified where novel wild diversity is present, especially in Georgia and Armenia,” Brock said. “This could prove to be a solution to the challenges of low genetic diversity in the crop.”

The payoff could be large, both for farmers interested in traditional food uses and for those who want to expand the use of camelina as a biofuels feedstock.

“Ultimately, its use as an aviation biofuel would be the biggest game-changer, as airline companies can reduce carbon emissions and make flying more sustainable by using camelina-derived jet fuel,” said Brock, who is now a National Science Foundation (NSF) postdoctoral research associate at Michigan State University. “Camelina-derived jet fuel has already been tested by the U.S. Air Force and in commercial airliners and shows greatly reduced emissions.

“Camelina oil blends have proven viable,” he said. “The next hurdle is ramping up field production and enhancing crop yield.”

Many uses for the ages

Although much of the current interest in camelina is in its use as a biofuel, there’s still considerable potential for it to re-emerge as a food and edible oil for modern consumers.

Brock himself was particularly moved by his interactions with camelina farmers during his field research.

“Observing how Ukrainian farmers process camelina seeds into oil—usually to be used on salads or for dipping bread—and a protein-rich seed meal for animal feed, was a critical point for me,” Brock said. “To see that there were still some traditional uses of camelina being employed in Europe made me realize the importance of understanding this crop and how it was used, but also where it came from in the first place.”

“Often genetics and archaeology are working toward the same goal regarding tracing lineages into the past—whether that is with plants, animals or people,” Ritchey said. “We are increasingly working more closely together with our data, research abilities and interpretations to answer these questions.

“It’s very exciting when the data align and we are able to answer these important questions about the development of not only the human species but also our interactions with other living things like plants.”

Where you grow what you grow: Camelina’s varied response to location

Oceans Help Us Fight Climate Change, Now We...
Read more
Previous articleEavesdropping on whales in the high Arctic
Next articleRecycling is the ambulance at the bottom of the cliff