Role of manganese in soil carbon and climate change 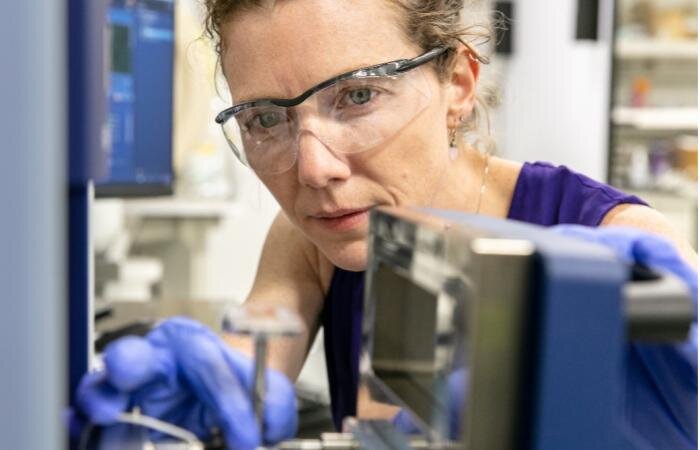 
While most people think first of atmospheric carbon emissions from fossil fuels when considering climate change, the planet’s soil actually stores more carbon and could become a major source of carbon release or a mitigation tactic in the years ahead. Just how soils store carbon, when and how much they release to the atmosphere, and how to get them to absorb more is the subject of intense research as scientists race to understand the processes at play, predict environmental change and use that knowledge to help heal the planet.

At the Department of Energy’s Oak Ridge National Laboratory, biogeochemist Elizabeth Herndon is working with colleagues to investigate a piece of the puzzle that has received little attention thus far: the role of manganese in the carbon cycle. Manganese is a metal micronutrient involved in plant growth and function. For example, manganese is used in photosynthesis to convert water molecules to oxygen. Manganese also influences other ecosystem carbon dynamics such as the breakdown of plant matter and stabilization of organic matter in soils.

The ORNL scientists detailed how further research can better inform understanding of the metal’s effects on carbon and the climate in a recent paper. Herndon and the team posed questions that science can address, such as how fungi use manganese to break down tough plant components like lignin, and how the manganese present in plant tissue could be used to help degrade organic matter—processes important to binding carbon in soils.

The function and influence of minerals such as iron on soil carbon have been more thoroughly explored. But Herndon’s work has already demonstrated that manganese, even though typically present at lower concentrations in soils, can contribute just as much to the carbon cycle.

“Manganese oxides are a very reactive component of soils,” Herndon said. “We’ve studied manganese in laboratory experiments, but we don’t really understand how it functions in the natural environment—how it transforms organic matter and influences carbon storage.”

Manganese oxides may play an important role in preserving organic matter in vulnerable environments, acting as “cements” that limit degradation of carbon stores, for instance, the scientists noted in the paper. Exploring how minerals like manganese oxide bind to the essential nutrient phosphorous in natural environments could also lead to a better understanding of how urban and agricultural runoff, sea level rise and flood control measures are affecting coastal ecosystems.

Herndon and her colleagues have already been delving into the intricate processes at play in the carbon cycle as part of their field work in the Arctic tundra, where ORNL is leading a large, multi-institutional DOE project called NGEE Arctic to understand and model the effects of thawing permafrost. Analyzing the biogeochemical changes as Arctic soils thaw has revealed an abundance of data to help scientists discern and predict the impacts of environmental change.

They have also studied manganese distribution in different geographic areas such as the Walker Branch watershed in Oak Ridge, Tennessee, and are collaborating with researchers at the University of Tennessee’s Institute of Agriculture to evaluate manganese uptake by crops and its impact on crop residue decomposition. ORNL scientists are also working to improve the representation of manganese impacts in prevailing climate models.

Even though these processes of how soil minerals can stabilize or destabilize organic matter are very important, they are not currently incorporated into predictive models for carbon storage, Herndon said. “There’s a lot of uncertainty around the ability of soils to store carbon, but they could play a very important role in mitigating climate change.”

“Our goals here at ORNL,” Herndon said, “are to not only understand what these soil mineral interactions are, but to also place them in a quantitative framework so they can be incorporated into our models to better predict and prepare for the future.”

Diurnal oxidation for manganese minerals in the Arctic Ocean

...
Read more
Previous articleDiscovery of new sensory organ for perceiving vibrational signals in leafhoppers, spittlebugs and planthoppers
Next articleWhy birds migrate vast distances – and how you can help during their breeding season