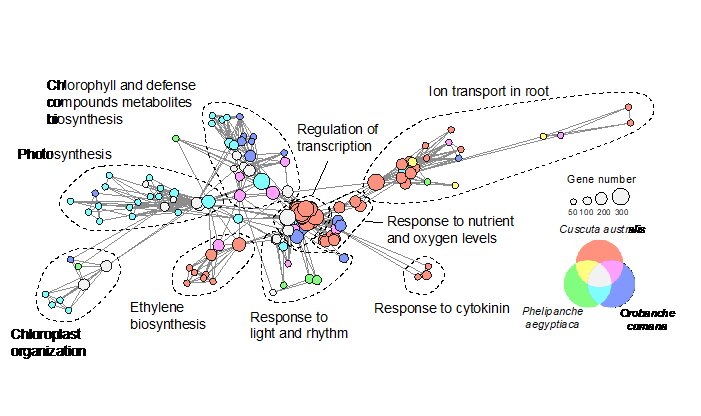 A research team led by Prof. Wu Jianqiang from the Kunming Institute of Botany of the Chinese Academy of Sciences (KIB/CAS) has recently sequenced and annotated the reference genomes of orobanchaceous plants, the autotroph Lindenbergia luchensis and two economically important holoparasitic pests Orobanche cumana and Phelipanche aegyptiaca. Relevant results were published in Molecular Plant.

By combining these newly sequenced genomes with existing data, the researchers performed the largest comparative genomics analysis of parasitic plants to date, revealing the evolution of the orobanchaceous parasitic genomes.

The researchers found that unlike dodder, orobanchaceous parasitic plants did not undergo a dramatic contraction in genome size and gene number. Instead, both hemiparasitic and holoparasitic orobanchaceous plants had larger genomes and more genes than the autotrophic Lindenbergia luchensis.

The haustorium is a unique organ in parasitic plants that enables them to establish a physical connection with their hosts so that they can live parasitically. Using haustorium transcriptome data, the researchers identified haustorially highly expressed genes in the genomes of various parasitic plants and found that these genes also underwent dramatic expansions.

There are two notable periods of gene expansions, one caused by a paleopolyploidy event (βL event, about 73.48 million years ago, before the emergence of parasitism), and the other was caused by an independent duplication after the divergence of each parasitic plant. Comparison with the neutral model revealed that the βL event played an important role in the origin of the haustorium, although it happened about 35 million years before the origin of parasitism.

Gene family evolutionary analysis revealed that these parasitic plants underwent simultaneous gene family contraction and expansion in their genomes. Gene loss became more severe as the degree of parasitism increased: from the about 2–3% gene loss in the facultative hemiparasites to about 6–7% gene loss in obligate hemiparasites, and to about 13–15% gene loss in holoparasites.

More than half of the genes lost in the Orobanchaceae were identical to those lost in dodder, a parasitic plant with a completely different origin. Most of these genes were related to photosynthesis and chloroplast function.

Results of this study support a three-phase model of parasitic plant genome evolution: first, development of haustorium which enabled a physical connection with host plants; second, after the haustorium had evolved, the parasites started to lose genes that were no longer needed, and third, the parasites evolved to adapt to their specific hosts.