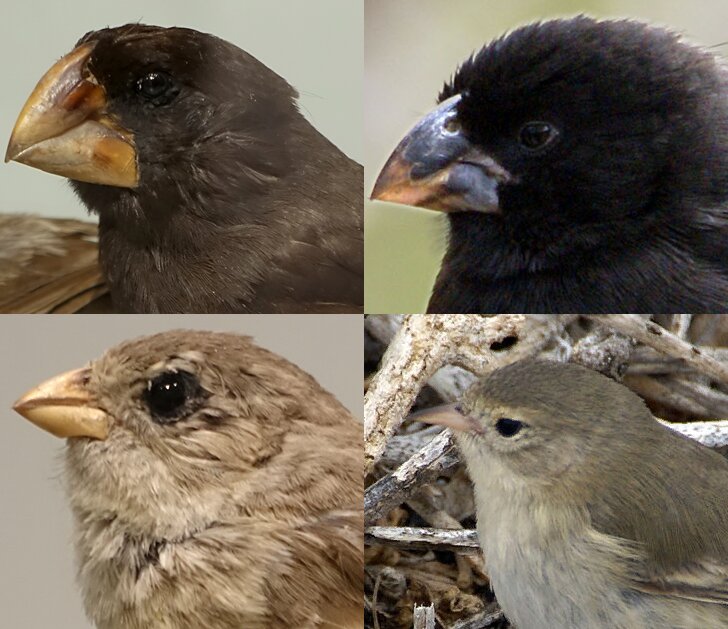 
In a study, published in Science Advances, an international team of researchers have identified 28 gene regions that have been particularly important in the evolution of Darwin’s finches. These genetic variants do not represent recent mutations but constitute ancestral genetic variation that has accumulated over time as different species of Darwin’s finches have evolved with striking differences in beak morphology.

Adaptive radiations are groups of closely related species that have diversified in ecology and morphology from a common ancestral species within a relatively short period of time, often after a new geographic area has been colonized. Darwin’s finches are an iconic example of this, wherein 18 species have evolved within the last million years after the ancestral species arrived on Galápagos. An important question in evolutionary biology is how such rapid evolution can take place?

Darwin’s finches have evolved in a relatively undisturbed environment: the archipelago is located about 1,500 kilometers west of mainland South America. Permanent human settlements have only existed within the last 100 years, and no species of Darwin’s finches has become extinct due to human activities.

A key evolutionary change among these birds is the diversification of beak morphology that has allowed different species to utilize different food resources including seeds of various sizes, insects, pollen and nectar from cactus flowers as well as blood from other species.

“During our field work on the small island of Daphne Major during a period of 40 years we found ample evidence of how variation in beak morphology has had a major impact on food utilization and survival among these birds,” say Peter and Rosemary Grant, Princeton University, who have collected more than 6,000 blood samples from different species of Darwin’s finches over the years. Some of these were used in the present study.

This new chapter in the genetic characterization of Darwin’s finches started with a field trip to Galápagos for the collection of blood samples to be used to construct a high-quality map of the entire genome of Darwin’s finches. The researchers brought portable sequencing instruments and carried out DNA sequencing on site on Galápagos.

“With the assistance of local researchers in the Galápagos, we were able to carry out the genome sequencing in the field where we collected the samples. This insured that we had the highest quality DNA for sequence analysis,” explains Carl-Johan Rubin, researcher at Uppsala University and first shared author on the paper. “This new high-quality map of the genome of Darwin’s finches will be a significant resource for studies of these interesting group of birds.”

The researchers next compared the genomes of small, medium and large ground finches. These three species are similar but show striking differences in body and beak size.

“Our genetic analysis revealed 28 gene regions that showed consistent differences among these three species,” explains Erik Enbody, who performed this analysis as a post-doctoral fellow at Uppsala University. “We were surprised that these gene variants were also present among other types of Darwin’s finches implying that they have a longer evolutionary history than the species themselves. A major message is that these gene variants have been used and reused during the evolution of Darwin’s finches.”

“Next we explored the function of the identified genes and noted that many of these genes are expressed in the developing beak, in line with our assumption that genes affecting beak morphology must have had a prominent role during the evolution of Darwin’s finches,” continues Carl-Johan Rubin.

The loss of biodiversity

The loss of biodiversity, measured as the increasing number of species that have become extinct due to the loss of natural habitats and human activities, is of major concern at present.

“Our study indicates that the situation is even more alarming than what is generally assumed because our main conclusion is that the rapid evolution of Darwin’s finches was dependent on genetic variants that evolved over hundreds of thousands of years,” explains Leif Andersson at Uppsala University and Texas A&M University who led the study. “In order to maintain biodiversity for future generations, it is as important to maintain large populations of common species as it is to save rare species from extinction, because the former is best equipped to adapt to future changes of the environment.”

Why some of Darwin’s finch nestlings have yellow beaks