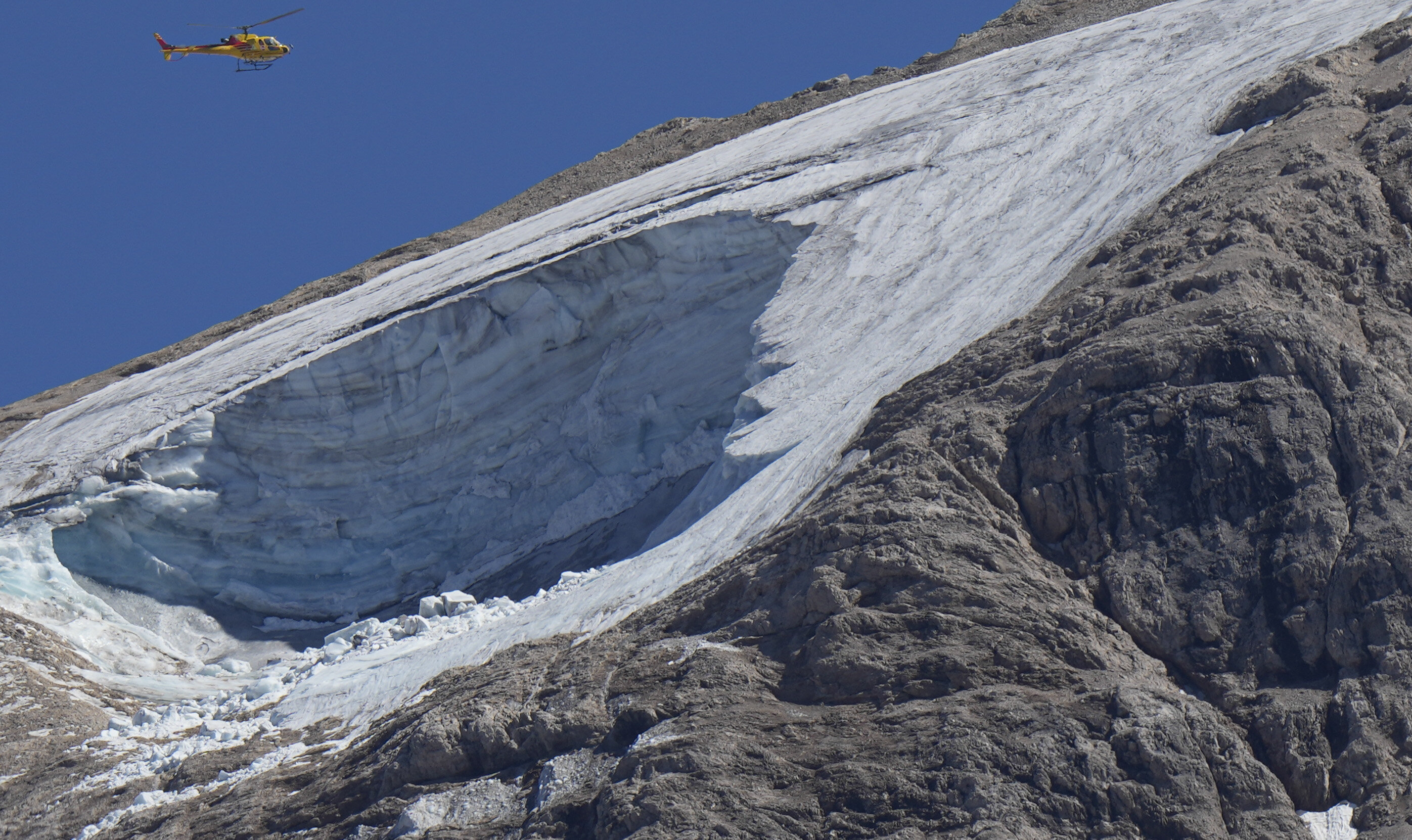 
Italy was enduring a prolonged heat wave before a massive piece of Alpine glacier broke off and killed hikers on Sunday and experts say climate change will make those hot, destabilizing conditions more common.

Seven hikers died and several others are unaccounted for after large chunks of ice and rock from the Marmolada glacier sped down the mountain in an avalanche. Higher temperatures coupled with below-average winter snowfall were among the factors that may have triggered the event, experts said.

The exact role of climate change in specific events is complicated and large portions of ice can break off Alpine glaciers naturally. But climate change is fueling hotter temperatures that can lead to more ice and snow melt, said Brian Menounos, a professor at the University of Northern British Columbia who researches climate change and glaciers.

“Glaciers are directly responding to a warmer climate, a warmer planet,” said Menounos. “They can respond to long-term changes, but they can also respond to these extreme events,” like heat waves.

The Marmolada glacier is in the Dolomite mountains, a range of steep, dramatic peaks in northeast Italy. The region is already being altered by climate change. Between the late 19th and early 21st century, temperatures in the Alps have increased twice as quickly as the global average, according to Copernicus, the European climate modeling group. The U.N. has identified the Mediterranean basin that includes Italy as a climate change hot spot prone to heat waves. Glaciers are in retreat throughout Italy, the Alps and across the world.

The government’s National Research Council said the Marmolada glacier has been shrinking for decades and may vanish in 25 to 30 years.

Before the avalanche, daytime temperatures at the glacier’s altitude were around 50F (10C) when they normally don’t rise much above freezing. The prolonged period of hot weather at high altitudes created a special set of circumstances, said Tobias Bolch who researches glaciers at the University of St. Andrews in Scotland.

Guglielmina Adele Diolaiuti, a professor at the University of Milan studying glaciers, said pictures of the ice that remains part of the glacier tell a story about what likely happened.

The top two thirds of the ice face appears slightly dirty, indicating it was exposed to air.

“It’s clear that this part of the vertical ice cliff was the internal part of a crevasse,” she said. A crevasse is a deep opening in a glacier.

The bottom is bluer, indicating it was attached, said Diolaiuti.

Water may have accumulated in the crevasse, adding weight and pressure on the glacier. It may also have loosened the glacier’s grip on the steep rock it was sitting on, experts said.

Anyone who has tried to shovel ice off a cold driveway knows that it fastens itself to the pavement, said Richard Alley, a Penn State professor who studies ice sheets. But when the weather warms, the ice loosens its hold.

“All of a sudden, whoosh, you can get it off,” Alley said.

The hikers were likely taken completely by surprise.

In addition to the heat, there was below normal snowfall this winter. Northern Italy is struggling through its worst drought in 70 years. When there is less snow, ice is exposed and impurities can collect on the surface of the glacier, turning the surface a darker color that traps more heat. The extra heat melts the ice and snow faster, St. Andrews’ Bolch said.

On Tuesday, rescue efforts turned up equipment and body parts. After rain made rescue difficult on Monday, the sun reappeared on Tuesday.

According to Daniel Farinotti, a professor of glaciology at ETH Zurich and WSL Birmensdorf, Switzerland, climate change might reduce the risk of certain avalanches. Glaciers need cold weather and snowfall to grow. If glaciers grow on a steep slope, ice that is pushed over ledges can break and cause avalanches. But with warming temperatures, glaciers retreat, and smaller glaciers create fewer hazards, he said.

In the case of the avalanche on Sunday, melting ice and snow is the likely culprit, experts said.

“The ice, the snow, is very sensitive to increases in temperatures, so we expect that these kinds of events will increase in frequency and intensity in the future,” said Roberta Paranuzio who researches climate change at the National Research Council of Italy.

While some avalanches occur in isolated areas, the area around the Marmolada glacier is popular with hikers.

Read more
Previous articleNew Insurance Risks as Cannabis Lounges Open Across the US
Next articleCBD Safety in Edibles: What Regulators are Thinking