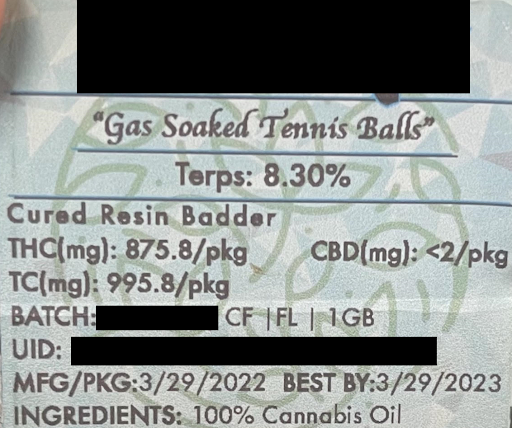 The THC content you see on a label when you walk into a dispensary? There is a very good chance the number is false.

In every state with regulated cannabis, there is a requirement to label the potency of products so consumers can make informed purchasing and medicating decisions. The regulations usually state that the THC/cannabinoid content on the label must be within a particular relative percent difference of the actual tested results for the product to be salable. In California, that threshold is +/- 10%.

The problem is, with all the focus on THC percentage in flower and concentrate products, enormous pressure has been placed on cultivators and manufacturers to push their numbers up. Higher numbers = higher prices. But unfortunately, improving their growing, extraction and formulation processes only gets companies so far. So, they proceed to ‘lab shop’: giving their business to whichever lab provides them the highest potency.

There are roughly 50 Department of Cannabis Control (DCC) licensed labs in the state, and competition is fierce to maintain market share in a maturing and plateauing industry. Whereas competition used to be healthy and revolved around quality, turnaround time and customer service, now it’s essentially become a numbers game. As a result, many labs have sacrificed their scientific integrity to chase what the clients want: higher THC potency results without contaminant failures. The practice has become so prevalent that labs openly advertise their higher potency values to gain customers without fear of recourse. Here are two examples: 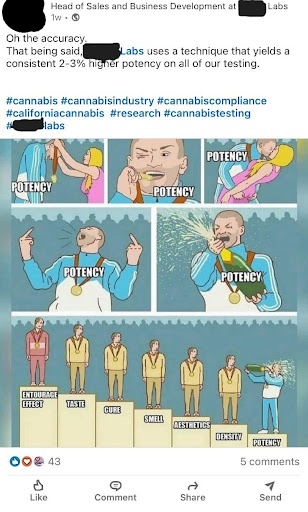 Over a year ago, a few labs fed up with what was happening got together to determine the extent of the potency inflation issue. We proactively purchased and tested over 150 randomly chosen flower samples off dispensary shelves. The results were staggering. Eighty-seven percent of the samples failed their label claims (i.e., were >10% deviant of their labeled values), with over half of the samples >20% deviant of their labeled THC values (i.e., over 2x the legal permitted variance). Additionally, our labs found multiple cases of unreported category 1 pesticides in some of the analyzed samples at multiple times the legal limit – a significant public health concern. The deceit was not limited to small cultivators trying to get by but also some of the industry’s biggest brands.

The same issues and economic conditions are in play for concentrates. Manufacturers of these products also hunt for the highest D9 THC values because wholesale prices for distillate are determined by THC content: <86% for the lowest value, 86-88%, 88-90% and >90%, with a new price point for over 94%. As a result, consumers can walk into a dispensary and find concentrates like the one shown below that report>99% total cannabinoids (>990mg/g) and contains almost 10% additional terpenes. You don’t have to be an analytical chemist to realize those numbers add up to well over 100%, which is physically impossible.

Everyone can agree that the system is broken, but who is at fault? Should the blame be placed on dispensaries, many of whom use THC % as their only purchasing or marketing metric? Or on cultivators, manufacturers and distributors, who seek the highest results possible rather than the most accurate ones? Or on the labs themselves, who are knowingly reporting inflated results?

Ultimately, the individual businesses are acting in their own self-interest, and many are participating in this practice simply to stay afloat. Dispensaries can’t reasonably be expected to know which results are inflated and which are not. Cultivators and manufacturers feel obligated to use labs that provide them with the highest results; otherwise, they’re putting themselves at a disadvantage relative to their competitors. Likewise, labs that aren’t willing to inflate their numbers have to be ready to watch customers walk out the door to maintain their principles – an existential dilemma for many.

The primary reason why potency inflation has become so prevalent is that there have been no negative repercussions for those that are cheating.

The axiom is true – don’t hate the player, hate the game. Unlike most businesses, testing labs operating with integrity want meaningful regulations and oversight to assure a level playing field. Without them, the economics force a race to the bottom where labs either have to inflate more and more or go out of business. Since 2016, the DCC (formerly BCC) has taken zero meaningful actions to discourage or crackdown on potency inflation— not a single recall of an inflated product or license suspension of an inflating lab— so predictably, the problem has gotten progressively worse over time.

So, to answer the question above – who is at fault for our broken system? The answer is simple: the DCC.

In the Fall of 2021, we began engaging with the DCC to address the industry’s potency inflation concerns. The DCC requested we provide them with direct evidence of our accusations, so we collected and shared the flower data mentioned above. The Department tested the same batches off the shelf and confirmed our results. Somehow not a single recall was issued – even for the batches containing category 1 pesticides.

We pushed for more accountability, and DCC Director Nicole Elliott assured us steps were being taken: “The Department is in the process of establishing a number of mechanisms to strengthen compliance with and accountability around the testing methods required of labs and will be sharing more about that in the near future.”

Instead, we got a standardized cannabinoid potency method (mandated by SB 544) that all labs will be required to use. On the surface, a standardized methodology sounds like a good thing to level the playing field by forcing suspect labs into accepting generally accepted best practices. In reality, however, most labs already use the same basic methodology for flower and concentrate cannabinoid profiling and inflate their results using a variety of other mechanisms: selective sampling, using advantageous reference materials, manipulating data, etc. Furthermore, the method mandated is outdated and will flatly not work for various complex matrices such as gummies, topicals, beverages, fruit chews and more. If adopted without changes, it would be a disaster for manufacturers of these products and the labs that test them. Nevertheless, the press release issued by the DCC reads as though they’ve earned a pat on the back and delivered the silver bullet to the potency inflation issue.

Here are a few more meaningful actions the DCC could take that would help combat potency inflation:

For some less disciplinary suggestions:

Someone might retort – who cares if the number is slightly higher than it should be? No one will notice a little less THC in their product. A few counterpoints:

We will continue to fight for a future where quality and ethics in the cannabis industry are rewarded rather than penalized. And consumers can have confidence in the quality and safety of the products they purchase. Our labs are willing to generate additional surveillance data, provide further suggestions for improvement in regulations/enforcement, and bring further attention to this problem. But there is a limit to what we can do. In the end, the health and future of our industry are entirely in the hands of the DCC. We hope you will join us in calling on them to enact meaningful and necessary changes that address this problem.