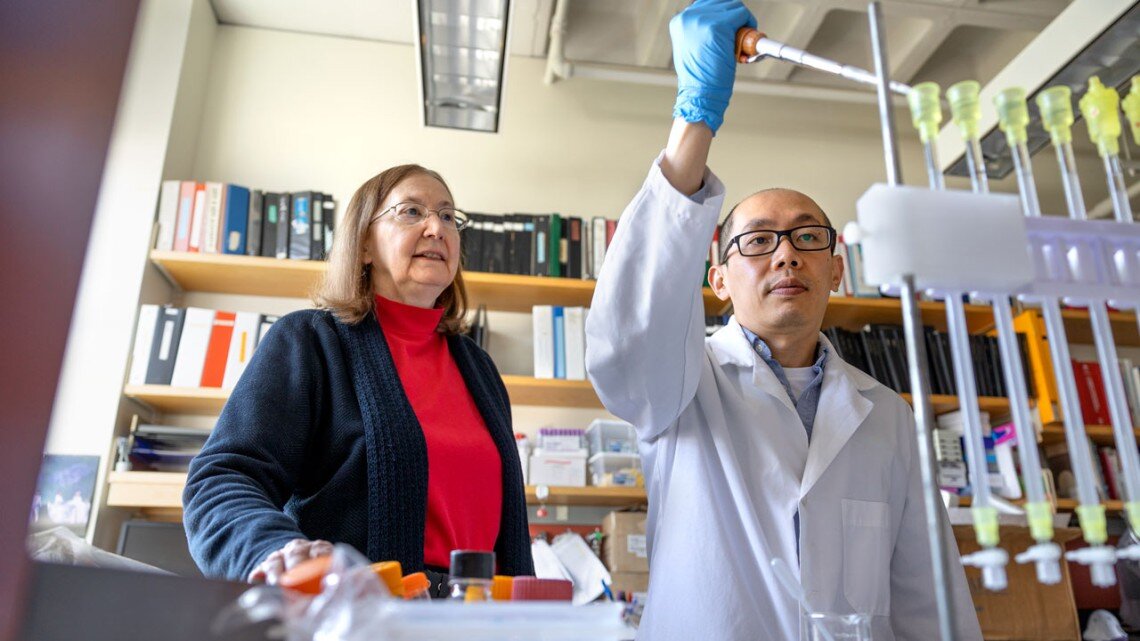 
A Cornell study describes a breakthrough in the quest to improve photosynthesis in certain crops, a step toward adapting plants to rapid climate changes and increasing yields to feed a projected 9 billion people by 2050.

The study, “Improving the Efficiency of Rubisco by Resurrecting Its Ancestors in the Family Solanaceae,” was published April 15 in Science Advances. The senior author is Maureen Hanson, the Liberty Hyde Bailey Professor of Plant Molecular Biology in the College of Agriculture and Life Sciences. First author Myat Lin is a postdoctoral research associate in Hanson’s lab.

The authors developed a computational technique to predict favorable gene sequences that make Rubisco, a key plant enzyme for photosynthesis. The technique allowed the scientists to identify promising candidate enzymes that could be engineered into modern crops and, ultimately, make photosynthesis more efficient and increase crop yields.

Their method relied on evolutionary history, where the researchers predicted Rubisco genes from 20–30 million years ago, when Earth’s carbon dioxide (CO2) levels were higher than they are today and the Rubisco enzymes in plants were adapted to those levels.

The study describes predictions of 98 Rubisco enzymes at key moments in the evolutionary history of plants in the Solanaceae family, which include tomato, pepper, potato, eggplant and tobacco. Researchers use tobacco as the experimental model for their studies of Rubisco.

“We were able to identify predicted ancestral enzymes that do have superior qualities compared to current-day enzymes,” Hanson said. Lin developed the new technique for identifying predicted ancient Rubisco enzymes.

Scientists have known that they can increase crop yields by accelerating photosynthesis, where plants convert CO2, water and light into oxygen and sugars that plants use for energy and for building new tissues.

For many years, researchers have focused on Rubisco, a slow enzyme that pulls (or fixes) carbon from CO2 to create sugars. Aside from being slow, Rubisco also sometimes catalyzes a reaction with oxygen in the air; by so doing, it creates a toxic byproduct, wastes energy and makes photosynthesis inefficient.

Hanson’s lab had previously tried to use Rubisco from cyanobacteria (blue-green algae), which is faster but also reacts readily with oxygen, forcing the researchers to try to create micro-compartments to protect the enzyme from oxygen, with mixed results. Other researchers have tried to engineer more optimal Rubisco by making changes in the enzyme’s amino acids, though little was known about which changes would lead to desired results.

“By getting a lot of [genetic] sequences of Rubisco in existing plants, a phylogenetic tree could be constructed to figure out which Rubiscos likely existed 20 to 30 million years ago,” Hanson said.

The advantage of identifying potential ancient Rubisco sequences is that carbon dioxide levels were possibly as high as 500 to 800 parts per million (ppm) in the atmosphere 25 million to 50 million years ago. Today, heat-trapping CO2 levels are rising sharply due to many human activities, with current measurements at around 420 ppm, after staying relatively constant under 300 ppm for hundreds of millennia until the 1950s.

Lin, Hanson and colleagues then used an experimental system developed for tobacco in Hanson’s lab, and described in a 2020 Nature Plants paper, which employs E. coli bacteria to test in a single day the efficacy of different versions of Rubisco. Similar tests done in plants take months to verify.

“For the next step, we want to replace the genes for the existing Rubisco enzyme in tobacco with these ancestral sequences using CRISPR [gene-editing] technology, and then measure how it affects the production of biomass,” Hanson said. “We certainly hope that our experiments will show that by adapting Rubisco to present day conditions, we will have plants that will give greater yields.”

If their method proves successful, these efficient Rubisco sequences could be transferred into crops such as tomatoes, as well as those from other plant families, such as soybeans and rice.