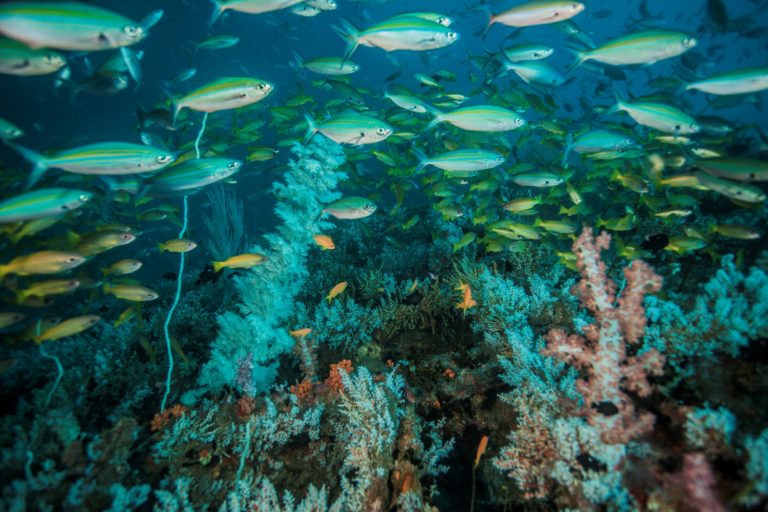 
COLOMBO — It was a perfect morning in Pigeon Island National Park in eastern Sri Lanka, where a group of tourists in a boat was taking in the rich marine life in the water around them. All of a sudden, there was a loud blast close by. As silence settled once again, they saw the fish that had been flitting nimbly about now either floating dead on the surface or struggling to swim. Through the clear water, they could see more dead fish in the seabed.

“Fish bombs or dynamite fishing has become a common occurrence in and around Pigeon Island National Park, where sounds of such explosions have become frequent,” said Kehse, who operates a dive center near the park.

He estimated that the recent blast occurred only about 400 meters, or a quarter-mile, from his tour group. Any closer, Kehse said, it could have been a human tragedy, which would have dealt a devastating blow to Sri Lanka’s already beleaguered marine tourism industry.

No sites off-limits for blast fishing

Dynamite fishing relies on an explosive to kill or stun large numbers of fish. The shockwaves from the underwater blast can kill a fish or rupture its swim bladder, resulting in the fish losing its buoyancy. They then become easy pickings for fishers, who just have to scoop them out of the water. But the practice is indiscriminately killing or injuring all marine creatures in the vicinity and damaging marine habitats such as coral reefs.

In a marine park like Pigeon Island, corals constitute the main underwater life support system, and the repeated blasts can shatter the substrate of that coral growth, preventing its recovery, said Arjan Rajasuriya, a leading coral expert in Sri Lanka and former researcher with the National Aquatic Resources Research and Development Agency (NARA).

Most of the corals in southern Sri Lanka are already bleached, and those in other areas are threatened. The eastern coast, where Pigeon Island is located, has the highest cover of live corals, but blast fishing poses a serious threat to them, Rajasuriya told Mongabay.

Shipwreck sites, which attract large numbers of fish, have also become targets of blast fishing, according to Dharshana Jayawardena of Dive Sri Lanka, a diving tour operator. That’s especially concerning, given that dive tourism is seen as key to helping the tourism industry in Sri Lanka recover from the COVID-19 pandemic and the ongoing economic crisis, Jayawardena said.

At the rate at which blast fishing is taking place, including at dive sites, it’s just a matter of time before a tourist gets injured, which would spell the end for Sri Lanka’s dive tourism industry, Jayawardena told Mongabay.

Among the sites where blast fishing is rife is Trincomalee in the country’s east, Galle in the south, and Mannar and Jaffna in the northern Pigeon Island is a particular concern because it’s one of just three marine national parks in Sri Lanka — a purportedly protected area administered by the Department of Wildlife Conservation (DWC). A naval camp is located close by, from where the explosions can be clearly heard.

Keeping explosives out of circulation

DWC director-general Chandana Sooriyabandara said the department’s officers on the ground work hard to tackle blast fishing whenever possible. Officers stationed near Pigeon Island said they try to go after the perpetrators whenever they hear an explosion, but these activities are so well coordinated that the fishing boats out at sea are quickly tipped off about the approaching patrol boats, allowing them time to flee.

The Sri Lankan Navy has apprehended several fishermen involved in blast fishing in recent years, seizing explosives that include TNT, C4, and gelignite. The latter, a water-based blasting gelatin, has increasingly become the explosive of choice.

In 2017, the Navy seized 52 kilograms (115 pounds) of water gel. In the first few months of 2019, they seized 63 kg (139 lbs). Following the April 2019 Easter church bombings, there was a massive crackdown on the circulation of explosives, resulting in a drop in blast fishing during that period.

The distribution of explosives in Sri Lanka is regulated by the Navy. Explosives that end up being used in blast fishing either leak from this distribution chain or are smuggled into the country by sea from neighboring India. The Navy says it has intensified its patrols of this sea route to crack down on the smuggling of explosives and other contraband.

But even these efforts are being undermined due to the unfolding economic crisis, the worst in Sri Lanka’s history. Acute shortages mean fuel for patrols by the DWC is being rationed. The Navy, meanwhile, is focused on another pressing problem: stopping the flow of desperate Sri Lankans trying to migrate to India.

Coral expert Rajasuriya said it’s impossible to identify the number of people who have access to explosives. The problem of blast fishing has gone from being a conservation issue and is now of national concern, he said. He called for strict vigilance and intelligence gathering, similar to the situation in the wake of the 2019 terrorist bombings, to identify how these explosives are being sourced.

Blast fishing is especially rampant in Mannar, in Sri Lanka’s northern region, according to S.S.M. Peramunagama from the Sri Lankan Department of Agriculture, who has researched destructive fishing activities there. It’s widely thought that blast fishing in Mannar is practiced by fishers coming from other regions, but the reality is that it’s the local fishers doing it, Peramunagama said.

When fish reach the market, it’s difficult to determine whether they were killed by a blast, even for fisheries inspectors. “Another difficulty in enforcing the law is the degree of political interventions that had often [led to] the release of the arrested fishers,” Peramunagama told Mongabay. He also highlighted the personal risk that the blast fishers themselves run, with loss of limbs a very real danger whenever they handle the explosives.

A 2021 review of the existing scientific literature on blast fishing shows it’s a worldwide problem that’s driven by more than just poverty. “Blast fishing is happening in Africa, Asia, South America, and Europe since explosives started [becoming] available relatively freely in the late 19th century,” said lead author Melissa Hampton-Smith of the University of New England, Australia. The study identified particularly destructive practices in parts of Southeast Asia, Tanzania, the Red Sea, and many other areas in Asia.

Though poverty is often cited as the main factor driving fishers to resort to blast fishing, the biggest contributor is the easy access to explosives, Hampton-Smith said. Access to credit and the prospect of increased catches were also identified as bigger drivers than poverty, she added. The review also indicated that blast fishers tend to be wealthier than fishers who don’t practice blast fishing.

Banner image of corals and colorful reef fish at the Wallet Wreck off Colombo, courtesy of  Dharshana Jayawardena.