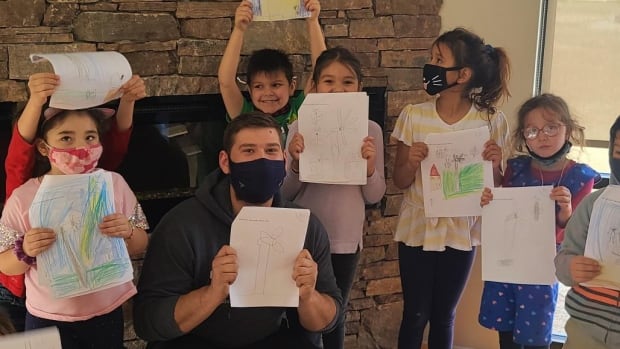 
When Drew Bernard returned to Lennox Island three years ago, he found there wasn’t a lot of work done in the community about energy.

He couldn’t find any report on how many houses were burning oil or what opportunities were available for the First Nation to move toward a more sustainable future.

Bernard knew he had to do something. Having worked in oil and gas in Alberta, he wanted to shift away from fossil fuels and work in green energy. He enrolled in Holland College’s Energy Systems Engineering Technology program to learn more about it.

Today, he is the energy lead on Lennox Island and is working to get the community to net zero and energy independence.

“Not only do we want to operate renewable energy systems and get us towards a greener future, we also want to be in control of that energy as we try to move towards being a sovereign First Nation,” Bernard told CBC’s Island Morning.

Bernard is one of many young members of Lennox Island First Nation who recently returned to the community and contributed their new, fresh ideas, said chief Darlene Bernard.

The chief fully supports Bernard’s vision, especially because of the threat climate change poses Lennox Island  — with many homes close to the water being affected by coastal erosion, she said.

“The energy projects we want to work on, and other work that we’re doing, is directly related to that, to the idea of reducing our carbon footprint — which in turn will help us with coastal erosion and climate change,” said Darlene Bernard.

‘Energy plan that is rooted in traditional knowledge’

Drew Bernard finished the first phase of his plan to get Lennox Island to net zero last year after he consulted with businesses and organizations like Maritime Electric and Efficiency P.E.I.

But more importantly, he spoke with different members of the band about green energy, from adults to children.

“We had community sessions really just engaging people on Lennox Island to make sure we create an energy plan that is rooted in traditional knowledge and is actually what the people want, not just what I want,” he said.

To learn more about that knowledge, he went to the elders — who taught him traditional values on sustainability. One of the pieces of advice that stuck with him is about the waters around Lennox Island, Bernard said.

“The waters around where we’re at are just so important to who we are, and we don’t want to have anything involved with the water. The water needs to be left the way it is.”

What the elders taught Bernard coincides with what he’s found about Malpeque Bay.

It’s a wetland recognized and protected under an international conservation treaty signed in 1971, known as the Ramsar Convention on Wetlands. It’s not only a sanctuary for birds and wildlife, but the majority of Lennox Island residents are based on the bay.

“We wanted to avoid that. We really identified solar as being the way that we would like to move forward with this.”

Solar energy isn’t popular on Lennox Island at the moment, with only one or two houses having solar panels, he said. He’s planning to create an off-reserve solar energy system.

He’s also working to transition the First Nation to electric heating and plans to install the first electric vehicle charging station on Lennox Island this summer.

“It was a very tumultuous year with COVID,” he said. “But we are optimistic to be able to start getting some energy systems together here soon.”