Measuring the environmental impact of a hydroelectric dam at Inukjuak 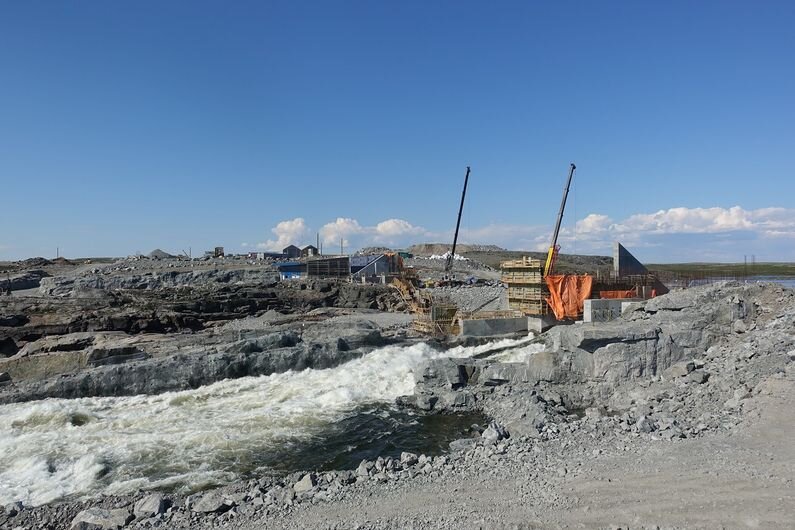 
The Innavik Hydro Project currently being built by the Pituvik Landholding Corporation in partnership with Hydro-Québec, Innergex Renewable Energy Inc. and CRT Construction will soon enable the Inuit community of Inukjuak to switch entirely to hydroelectric power. There will be a dam on the Innuksuac River.

The village is currently supplied by diesel-generated electricity. With the hydro project, it will be able to embark on an energy transition. The 7 megawatts of electricity generated by the plant will exceed the community’s needs, and Inukjuak will be able to use the surplus energy to support new local businesses and diversify its economy.

The dam, one of the first in the world to be built on permafrost, has been under construction for a year. It is a run-of-river dam, which means vast tracts of land won’t be flooded to create an artificial reservoir.

However, some land upstream will have to be submerged in order to funnel water to the plant. Contaminants including mercury and hydrocarbons could be released from the permafrost into the environment.

To measure the potential effects of these contaminants, Professor Marc Amyot and his research team from the Department of Biological Sciences at the University of Montreal went to Inukjuak and began by characterizing the environment in its present state, before the flooding. The study is part of a four-pronged research project that also includes monitoring the Saint-Maurice and Romaine rivers.

“The Inukjuak component of the project will monitor the environment to determine whether there is any degradation of the permafrost in the course of the seasons, after land upstream from the plant is submerged in November,” Amyot explained. “The permafrost contains mercury which could be released during the cycle of freezing and thawing, and then carried downstream by the river.”

Measurements were therefore taken this summer so the data can be compared with those that will be recorded after the Inukjuak hydroelectric plant begins operation.

The research team will pay special attention to mercury methylation by the river’s micro-organisms.

Mercury methylation is a natural biological process that produces methylmercury, a highly toxic compound which accumulates in living tissues and increases in concentration moving up the food chain, from aquatic insects to fish to the organisms that feed on the fish, including humans.

“One of the objectives of our study—both in Inukjuak and on the Saint-Maurice and Romaine rivers—is to assess the potential for human uptake of contaminants and nutrients when the food is ingested,” Amyot added. “We created a protocol that mimics human digestion in the lab to be able to estimate what portion of the compounds becomes available, depending on how food is prepared and cooked.”

Amyot’s research project will also look at the impact of hydroelectric dams on Indigenous lands around the Saint-Maurice and Romaine rivers.

The project was initially designed by Hydro-Québec and Innavik Hydro, with the Inuit community of Inukjuak, the Innu community of Ekuanitshit and the Atikamekw community of Wemotaci. It has received $1.9 million in funding from the Natural Sciences and Engineering Research Council of Canada’s Alliance grants program.

For decades, logs were floated down the Saint-Maurice River. The combination of logging along the river and major forest fires in the past may have brought increased mercury inputs to the river. The project’s ambitious objective is to assess the combined impact of 10 hydroelectric dams and disturbances to the landscape on mercury levels in the sediment, the water and aquatic organisms, along 300 km of the river.

On the Romaine River, the research project began in 2016 and is looking at four hydroelectric dams.

“Our initial results indicate high concentrations of methylmercury in the water near these dams,” said Amyot. “What is surprising is that peaks of the contaminant are observed as early as June. Usually, these would be seen late in the summer season.” The project will therefore study the mechanisms of mercury methylation under ice in winter.

Are elevated levels of mercury in the American dipper due to run-of-river dams?

Provided by
University of Montreal

Citation:
Measuring the environmental impact of a hydroelectric dam at Inukjuak (2022, July 26)
retrieved 28 July 2022
from https://phys.org/news/2022-07-environmental-impact-hydroelectric-inukjuak.html