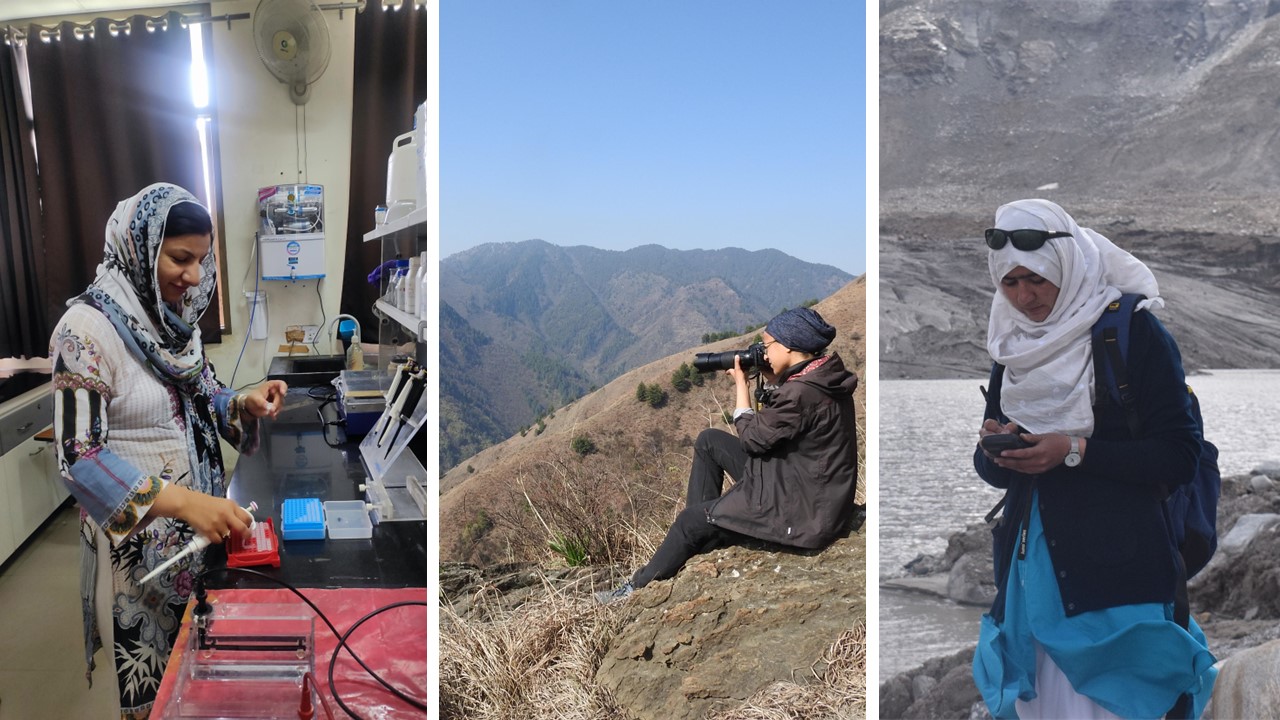 
Several women scientists from Kashmir are at the forefront of research to tackle changing climatic patterns that threaten local ecologies, livelihoods and networks that sustain them. Scientists Nasheeman Ashraf, Ulfat Majeed and Mehreen Khaleel come from different backgrounds and work in different fields, but a common desire to study the impacts of climate change on Kashmir and address them binds them.

The one who is trying to solve the saffron problem

Tired of the question “Khaali kamre mein kya science karogey? (What science will you do in an empty room),” Nasheeman Ashraf, a biotechnologist, took up this challenge head-on and created a standard molecular biology laboratory from scratch.

Today, she is at the forefront of climate action. Her research work as a Principal Scientist in the Plant Biotechnology Division of CSIR-Indian Institute of Integrative Medicine (CSIR-IIIM), Kashmir, focuses on one of the world’s costliest spices: saffron. She aims to highlight climatic impacts on saffron cultivation and offer solutions to boost the production and cultivation of the coveted spice.

Saffron is cultivated only in a few countries: Iran, Spain, Greece, and India. In India, saffron is traditionally cultivated only in the Union Territory of Jammu and Kashmir, in four districts, Pulwama, Budgam, Srinagar, and Kishtwar. Ashraf explained that Kashmir, once known as the South Asian hotspot for saffron production, has, over time, lost this heritage to several causes. “They include a dearth of high-quality corms as seed material, poor soil fertility, poor irrigation, infestation by rodents and diseases and increased urbanisation on land that is conducive for the crop, rampant adulteration, and import of cheaper Iranian variety. Among all these factors, the most significant challenge that threatens the existence of the saffron industry in Jammu and Kashmir is the adverse effect of climate change.”

Official figures show that the area under saffron has reduced from around 5,707 hectares in 1996 to 3,875 hectares in 2010-11. “In the past decade, the low yield has dissuaded farmers, and many of them have already shifted to growing other higher yielding crops like apple,” said the 40-year-old Srinagar-born scientist, reflecting on the motivation to work on saffron cultivation.

Her penchant for reading and curiosity to explore new things triggered her love for science. After pursuing her master’s in biochemistry from G.B. Pant University of Agriculture and Technology, Uttarakhand, she obtained her Ph.D. from the National Institute of Plant Genome Research, Jawaharlal Nehru University, New Delhi. In 2013, she returned to Srinagar with the dream of giving back to her community through her scientific expertise.

“On my return to Srinagar, I was given a large empty room and thereafter left to my own devices. It was a mammoth task to convert the room into a standard molecular biology lab. While I had a lot of support when needed, and I could navigate the male-dominated world with the support, there was a need and requirement to prove again and again that we can do it too,” she recalls.

Her research saw the light of day only in 2015 when she started publishing her work on saffron and the impact of climate change on it. She said the weather has become quite erratic since 2018, and rains are either scanty or distribution is irregular, adversely affecting the critical stage of flowering in saffron. Untimely rainfall and waterlogging can result in a “corm rot”. Saffron is the stigma of the Crocus sativus flower, commonly known as saffron crocus or saffron bulbs. It is propagated by bulbs called corms.

“In collaboration with my colleague, Syed Riyaz-ul-Hassan, who is a principal scientist in the Institute’s Microbial Biotechnology Division, we have identified a fungal endophyte or beneficial microbe in saffron corms. We collected samples from several districts and evaluated the status of microbes present in them. The identified microbe reduced corm rot by 50 percent and increased crocus metabolites,” she said.

Read more: The woman who breaks stereotypes while rescuing wildlife in Kashmir

The institute has inked a deal with an agribusiness company based in the region. “We are trying to create a bio-control agent from this fungal endophyte. This year, we will go for a third-party trial. We have to check whether this endophyte has any hazardous effect on other crops,” she said.

Ashraf and colleagues also roped in farmers from 10 Kashmir districts and encouraged them to plant saffron in their fields as part of their institute’s saffron cultivation drive. “Since farmers were directly involved, they were encouraged to see the saffron bloom in their fields,” she said.

The scientist emphasised that they are in the process of checking the chemical composition of saffron grown at different locations so as to get an idea about the effect of microclimatic conditions on saffron quality if any. “This way, we would be able to present alternative sites for large-scale saffron cultivation,” she said.

The one with an interest in glaciers

Born in the small village of Saloora in Ganderbal district in central Kashmir, Ulfat Majeed knew that science was her calling at an early age. Today, the 28-year-old female scientist is known for her stand-out work on the glacial lakes and the impact of climate change on them. Her research specifically aims to understand glacier-glacial lake-climate interactions and associated Glacial Lake Outburst Flood hazards over the western Himalayas. Her interest in science arose from her curiosity about the world in high school. “I asked too many questions. I was just so curious”.

But when it came to choosing her degree, it was a journey with challenges. “My parents strongly objected to my career preference and wanted me to take up medicine. They felt the best jobs are always in engineering or medicine, to the point that I always had this pressure to perform and prove myself,” Majeed said.

In her Ph.D., scheduled for completion in August this year, Majeed is working on the dynamics of glaciers associated with proglacial lakes forming in the frontal region of glaciers across the Jammu and Kashmir region. She has mapped over 330 proglacial lakes and unravelled changes using satellite data over different mountain ranges with unique climates in the Jammu and Kashmir region. Her analysis points to these glaciers having lost 9.58% percent area from 784.4 square km in 1990 to 709.19 square km in 2019.

Majeed noted that glaciers have a snout from which water releases and pours into these water formations called proglacial lakes. “In my research, I have found that these lakes register a constant increase. The growth could be because of various factors, such as climate change. The water volume will continue to increase since the lakes are still developing in our region,” she said.

If left unaddressed, the rise portends catastrophic consequences for the region, especially in the form of proglacial outbursts. “The proglacial lake water is held by loose rock-debris material that can breach due to geomorphic, climatic or seismic factors. The frozen landscapes (permafrost) on steep slopes in the lake vicinity can also trigger an outburst of these glacial lakes. Since Jammu and Kashmir fall in seismic zone 4 and 5 (high-risk zones), there are high chances of their outburst with the occurrence of a high-intensity earthquake,” she warned.

She emphasised that extreme precipitation like cloudbursts can also lead to lake bursts. “Jammu and Kashmir and Ladakh have shown an increase in the frequency of cloud bursts in recent years. Therefore, it poses a significant risk to the villages or tourist infrastructure in the vicinity of the lakes,” she said.

Majeed said in light of the changing climate, she is trying to design and implement an early warning system based on Information and Communication Technology (ICT) at the university for glacial lake outburst floods in the region through her research.

“Glacial lake expansion would continue by the end of this century, which could also increase the frequency of glacial lake outbursts. However, we are trying to measure their hazard potential and develop a conceptual framework to lay a foundation for designing a GLOF Early Warning System (GEWS) for people downstream of the potential outburst flood hotspots,” she said.

Read more: What is glacial lake outburst flooding and how does it affect the Himalayas?

The one with a love for biodiversity

Mehreen Khaleel, 32, broke a new ground for female scientists in Kashmir when she set out to study the lesser-known aspects of climate change and how it affects the region’s biodiversity through her research and conservation efforts.

Coming from a family of academicians and doctors, not pursuing science wasn’t an option for her. It helped that she was naturally inclined towards learning new things, exploring, and being observant. “What inspired me to pursue science as my career was the process of scientific research. I have always been intrigued by the questions of ‘how,’ ‘what’ and ‘why’, and I mostly found their answers in science,” she said.

According to the study, langurs are found within an elevation range up to tree-line. “However, the tree-lines are affected by various human-caused activities and increasing temperatures. We speculate that langurs have started exploring lower altitudes due to shrinking and disturbed habitats. That could be one reason why the number of human-langur interactions in Kashmir has started to increase. Human-langur interactions were almost negligible till 2017 but have increased since. This downward movement of animals into human habitation also affects the movement of predators,” Khaleel said.

The young scientist said that langurs form a strong prey base for large carnivores like leopards. “If their population is altered in the area where their predator is present, it can disturb the whole eco-system,” she said.

To create mass awareness of the wildlife species and the impact of climate change on them, she founded the NGO Wildlife Research and Conservation Foundation (WRCF) in 2018.

“To impart education of flora and fauna, eco-spaces and their importance and effects of warming temperatures on them, we conduct awareness programs in various schools and colleges in Srinagar and other districts of the valley. Our main focus is on schools in rural areas, but we also educate students from the city,” she said.

Additionally, WCRF is currently working on the impact of climate change on the region’s wetlands. “Our cross-sectional work on the wetlands of Kashmir’s aquatic and aerial insect world would help us to understand the impact of climate change on wetlands and the factors leading to their diminution. Study on odonates, which are largely insects like dragonfly and damsel fly, of threatened wetlands like Khushaalsar and Gilsar in partnership with WWF India was a step towards understanding the same,” Khaleel added.

Read more: Forests outside protected areas will be important to save Himalayan langurs