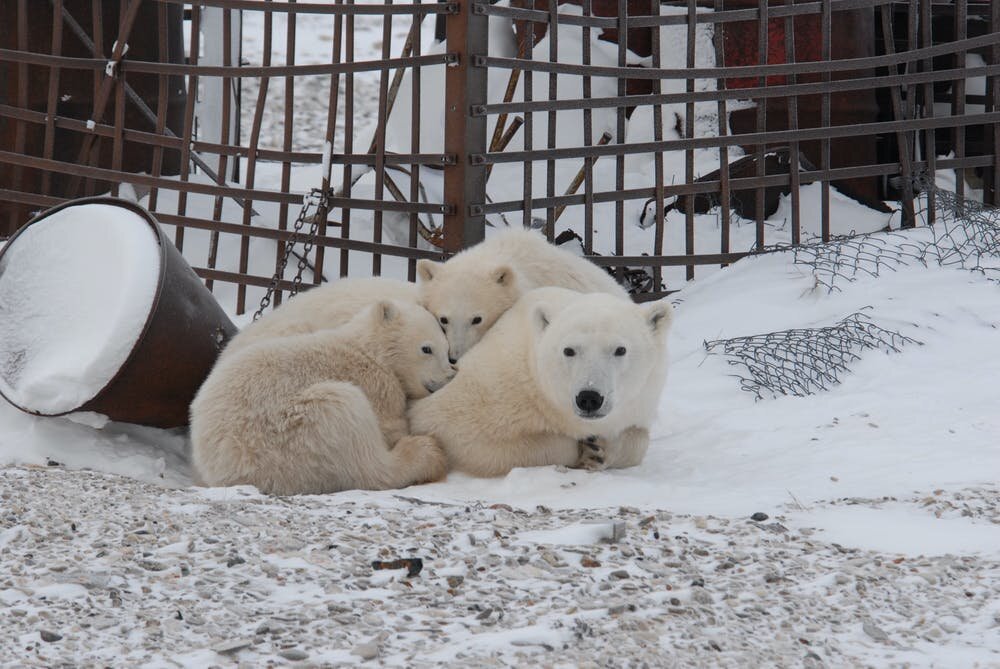 
More than 50 hungry polar bears invaded the Russian coastal village of Belushya Guba over a period of three months, attracted by the local dump. Some bears entered homes and businesses by ripping doors off hinges and climbing through windows. These invasions have been steadily increasing in Arctic settlements, though this case, in the winter of 2019, was one of the worst. While few people have been attacked, the number of dead bears has climbed.

I’m a biologist who has studied bears for the past 30 years. Over millennia, polar bears evolved an ability to locate food in the harsh Arctic climate. Now, as climate change causes a loss of sea ice, their foraging season is shorter and they’re forced onto land far more than ever before. Once on land, bears‘ noses draw them into villages where they find ample unsecured food.

My colleagues and I recently published a paper on how human food and waste are becoming a major threat to polar bear existence—and jeopardize human safety. We also offer solutions.

Masters of scent and memory

Polar bears live in an extremely austere environment where finding food drives their every move. To aid them in their perpetual hunt for food, polar bears have one of the most highly developed senses of smell of any animal on the planet. Their ability to detect scents from afar can be a problem, however, when the scent is not coming from seals—their main food resource.

Once a polar bear has discovered a food source, it is not going to forget about it. While studies are few, work in zoos suggests bears are among the most curious mammals, investigating and exploring new objects long after other mammals have abandoned them. That, coupled with their extraordinary ability to remember both the timing and locations of seasonal food opportunities, serves them very well.

At the top of the Arctic food chain, polar bears feed largely on ringed seals (Pusa hispida), which feed on fish, which in turn feed on plankton. Disruption of this food chain will have dire consequences for the stability of the entire ecosystem. The U.S. has classified the once-abundant polar bear as threatened, meaning it is in danger of going extinct if trends continue.

Polar bears are ambush predators. They attack seals surfacing through holes in the sea ice to breathe. In the water, bears are good swimmers but not nearly agile enough to catch a fleeing seal, so they rely on sea ice as a platform from which to hunt.

Not only does less sea ice cover the Arctic Ocean, but what remains is not as thick as it used to be—a prelude to what will eventually become an ice-free Arctic basin. When that happens, all polar bears will be forced ashore, without the ability to hunt seals.

Polar bears’ cruising the shores and entering human settlements are direct results of reduced sea ice—and the loss of hunting opportunities that come with it.

The threat of unsecured garbage

Indigenous peoples and more recent arrivals make up the nearly 4 million people living throughout the Arctic in the countries of Russia, Norway, Greenland, Canada and the U.S. The economies of these villages are largely subsistence-based and are by no means affluent. Historically, food was never discarded in these areas. But today’s throwaway global economy has resulted in dumps full of waste, including foodstuffs.

When polar bears enter these dumps in search of food, they are attracted to strong-smelling substances, some of which are not even edible. For example, antifreeze attracts bears—and is fatal when ingested. The many chemicals in dumps become toxic potions, which either kill bears outright or weaken their immune systems. Additionally, bears have been known to ingest nonfoods. Wood, plastics and metal have all been found in dead bears’ stomachs. Wraps, bags and other membranelike items jam up the small opening from the bear’s stomach to its intestine, resulting in a slow and painful death.

Once bears have thoroughly rummaged through dumps, they spin off into nearby villages—confronting people, attacking their pets and livestock and foraging around structures, within which they expect to find food.

Solutions already exist to remedy this situation. However, they require money and political will.

Electric fencing is highly effective at separating bears from garbage but can be costly for a small village. Warehousing garbage, then barging it offsite to facilities where it can be safely disposed of, is also effective, but expensive. Incinerators have been used in some villages like Churchill, Canada, and have greatly reduced the amount of garbage. But these solutions come at an even greater cost, so villages would need financial assistance to put them in place. Education about how to properly store bear-attracting foods and substances would also help address the problem.

In brown and black bear battlegrounds like Yellowstone and Yosemite, managers have long fought the problem of bears attracted by garbage, learned and succeeded. From a high of 1,584 human-bear incidents in 1998, Yosemite recorded only 22 by the end of 2018—a 99% decrease.

The knowledge exists on how to put an end to “dump bears”—and all that goes with that unfortunate title. In the battle of bears and garbage, bears are most often the losers.

Citation:
Human garbage is a plentiful but dangerous source of food for polar bears (2022, July 20)
retrieved 20 July 2022
from https://phys.org/news/2022-07-human-garbage-plentiful-dangerous-source.html