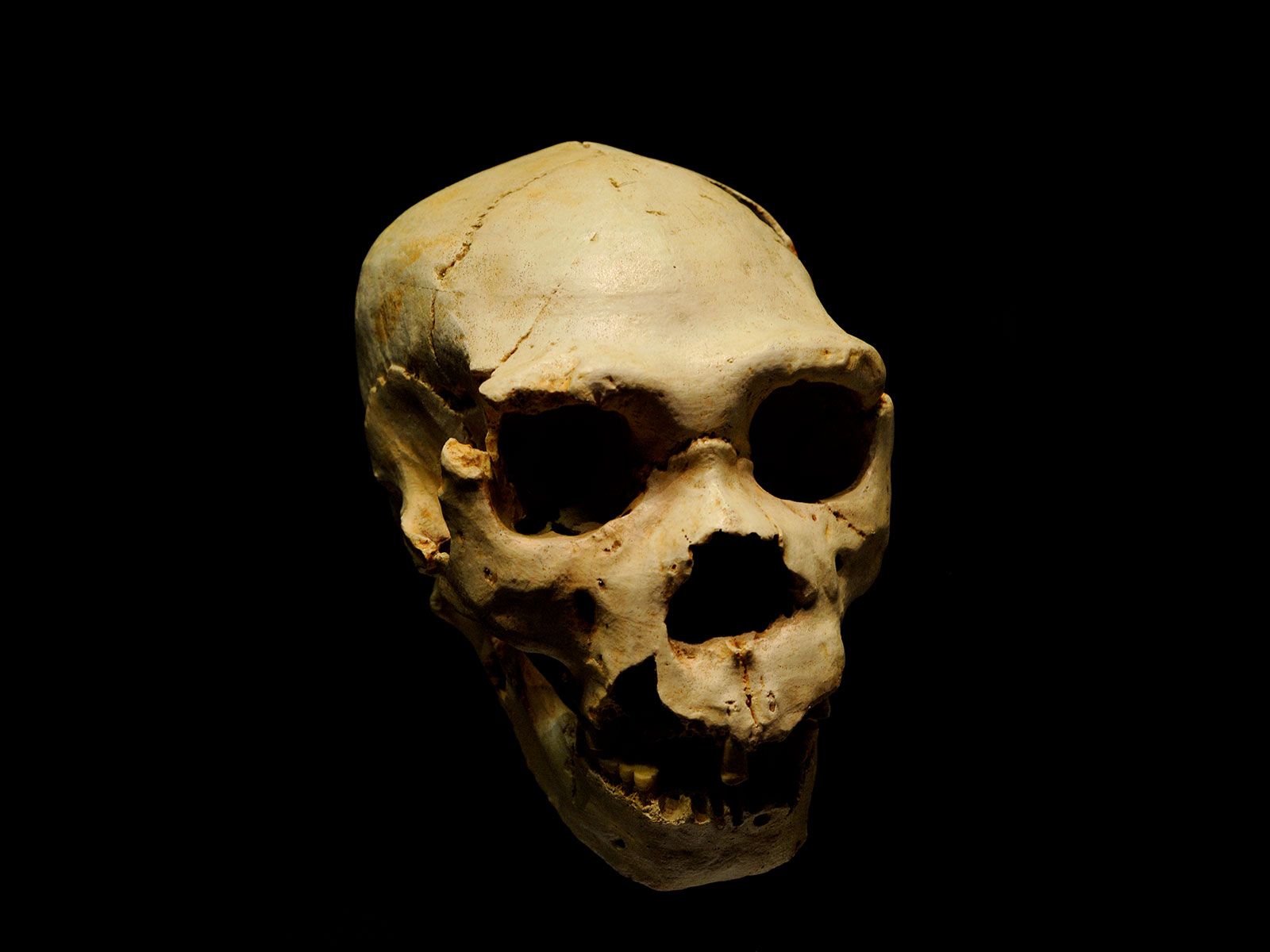 
Hundreds of thousands of years ago our ancestors had an intimate relationship with their environment, which helped shape where and how they lived. But when the climate changed— when the river ran dry or local grasslands and herds dwindled—how did ancient humans respond? Bones, stone tools and other artifacts can show us what hominins looked like and how they behaved over time. But as difficult as it is to discover a 300,000-year-old skull, it can be even harder to find tangible evidence showing what the habitats these humans called home were really like—especially because changing climate has dramatically altered them many times over.

Now, scientists have created a supercomputer model of global climate, and its changes, stretching back some two million years. Researchers paired this paleoclimate simulation with real world evidence from thousands of ancient human bones and stone tools to find out what the conditions were like where ancient humans existed. They then mapped the possible distribution and movements of five major hominin species including our own—Homo sapiens—based on where and when favorable habitats existed. Intriguingly, the model results suggest that dramatic environmental changes played a role in major evolutionary changes like the origin of our own species.

Over the last 25 years scientists exploring human origins have become increasingly interested in the ways that changing climate and variable ecological conditions, like droughts and freezing temperatures, helped to guide evolution. The idea is that the need to survive in variable environments would favor humans with genetic changes that made them more adaptable and better able to survive in a wide range of conditions.

Exploring this theory can be challenging because there’s often little evidence of exactly what the climate, or a given localized environment, was like in the times and places that major evolutionary changes occurred. Climate records can be teased out of ice cores or ocean sediments, but such evidence is especially lacking at the fossil sites where scientists have found hard evidence of stages on our evolutionary journey. In Africa, for example, only a few terrestrial records exist that stretch back two million years.

Axel Timmermann, director of the IBS Center for Climate Physics at Pusan University, South Korea, led a team that used the ICCP/IBS Supercomputer Aleph to simulate the history of global climate variability stretching back two million years. “The advantage of this approach is that it allows us to obtain climatic information everywhere on our planet,” explains Timmerman, co-author of the study published this week in Nature.

Earth’s elliptical orbit around the sun changes its shape slightly on periods of 100,000 and 400,000 years known as the Milankovitch cycles. This, along with periodic wobbles of the Earth on its axis, cause the levels of solar radiation we receive to wax and wane, and the planet to go through periods of natural climate change. These shifts occur on far longer time scales than today’s climate change, in which human activity plays a major role, but over time ice ages and warm eras dramatically altered habitats around the world according the machinations of the astronomical clock.

The climate model simulation shed light on the key conditions that humans would have needed to thrive, like rainfall, temperature and vegetation levels. The model’s results were cross checked against existing paleoclimate data from key selected sites—ice cores, ocean sediment and cave deposits like stalagmites—and found to match them well, vouching for its accuracy.

Tackling the bones and stones aspect of the study, Pasquale Raia, of the University of Naples, constructed a vast database cataloging more than 3,200 human fossil and archaeological artifacts from Africa, Europe and Asia, stretching back some two million years. This showed evidence for the known distribution of five species (H. erectus, H. heidelbergensis, H. neanderthalensis, and H. sapiens and ‘Early African Homo,’ a pairing of H. ergaster and H. hablis) and when they lived in a location.

Comparing the model’s simulation of existing climate conditions in the times and places where fossils were actually found, allowed the group to identify the habitats in which each species was successful. Researchers then mapped out various other places, with similar climes, they might have been living.

Some species, particularly older lineages like H. ergaster and H. hablis were hypothesized to have lived only in a more narrow range of conditions. H. Sapiens and H. Erectus had the most diverse suite of habitats, which Timmermann suggests marks them as adaptable generalists. That “may have enabled them to become global wanderers, reaching remote regions on our planet,” he notes.

Michael Petraglia, director of the Australian Research Centre for Human Evolution at Griffith University, says the maps of suitable habitat nicely show the possible spread of those species into new territories and a wider range of environments.

“This suggests to me that these species likely developed a range of cultural adaptations, allowing them to survive, for instance in cold and highly seasonal environments,” says Petraglia, who wasn’t involved in the study. “Fire and the development of more sophisticated weaponry for hunting are examples of cultural innovations that likely enhanced their survival.”

But survival wasn’t always easy or even possible. Major environmental stresses, like droughts, likely shrunk local population sizes, especially among more vulnerable species less adaptable to different habitats. Such events may have caused a given gene pool to shrink in size and in diversity as its members died off. Survivors might have lived thanks to genetic advantages, and those would become ubiquitous among the group and passed down to descendants. Some of these genetic changes may have been so significant that they comprised part of the transition from one ancient human species to another.

Paleoanthropologist Rick Potts, director of Smithsonian’s Human Origins Program, notes that the study builds on work stretching back more than two decades. Researchers, including Potts, have been piling up evidence for the theory that climate-driven ecological changes helped drive human evolution. The key to this ‘variable selection’ hypothesis is that ecological instability, driven by climate changes, would impact evolution by favoring genetic traits that made humans more flexible and better able to adapt to such changes.

”However, having a new tool—the 2Ma simulation—for generating habitat reconstructions relevant to hominin speciation and dispersal is a real positive,” says Potts, who wasn’t involved in the study.

So far, when the model’s habitation maps are checked against evidence from archaeology, anthropology and genetics, the general outlines of our evolutionary journey agree. The authors also used their maps of paleoclimate to suggest some intriguing specifics.

Using the model, the authors suggest that South African populations of H. Heidelbergensis endured two periods (360,000 to 415,000 years ago and 310,000 to 340,000 years ago) in which their habitat suitability was greatly reduced. The return of high value habitats, from 200,000 to 310,000 years ago corresponds with the disappearance of that species and the emergence of Homo sapiens. Evidence for this longstanding transition theory can be seen in the record of increasingly modern skulls like Kabwe 1 (300,000 years old), Florisbad (260,000 years old), and Hereto (170,000 years old).

If H. Heidelbergensis was ancestral to ourselves, and we arose during a speciation period between 200,000 and 300,000 years ago, the conditions favored by both species must have overlapped during that era. That’s exactly what the climate model suggests occurred in South Africa.

A similar convergence of suitable habitats, in Europe, lends support to the hypothesis that another species transition took place there between the European H. heidelbergensis and Neanderthals some 400,000 years ago.

The model’s habitat interpretations largely match existing aspects of the fossil, archaeological and genomic records. That may mean the model is accurate, but it also begs the intriguing question of how good it could prove at predicting entirely new ideas. “Will it be a useful predictive tool for novel hypotheses about human evolutionary history for the past two million years?” Potts asks.

The study also wasn’t designed to provide insights on exactly how the changing environmental conditions it models actually influenced processes of human dispersal and speciation. “The simulation will be most important if it leads to new hypotheses about how climate led to population variance and divergence and thus to speciation; or how habitat corridors opened and closed, thus leading to predictions about past dispersals that are, as yet, undocumented in the fossil record,” Potts says.

Ultimately it’s not climate so much as the ecological conditions in any given place, like what kind of food and water were available, and the range of plant and animals species present, that determine which human species could have survived and how they must have adapted over time. Future studies employing the climate models should also account for how complex those ecosystems are, for example by studying evolutionary changes that might be seen in other fauna. If changes in precipitation, temperature and plant production impacted humans they would have also have had evolutionary impacts on large mammal species, for example, whose bones are plentiful at many hominin fossil sites. Exploring these wider ecosystem impacts is one example of how the hypotheses in the climate model might be further tested, and perhaps reveal new ideas.

“The habitat suitability models are therefore a welcomed scientific tool, but they are only models,” says Michael Petraglia. “We have a lot of work to do on the ground, recovering not only fossils and archaeology, but reconstructing the environments in which hominins found themselves.”

Oceans Help Us Fight Climate Change, Now We...
Read more
Previous articleClimate Change Will Reshuffle Marine Ecosystems in Unexpected Ways – “Like Putting Marine Biodiversity in a Blender”
Next articleWhat Different Types of CBD Vape Pen can I Buy in the UK?