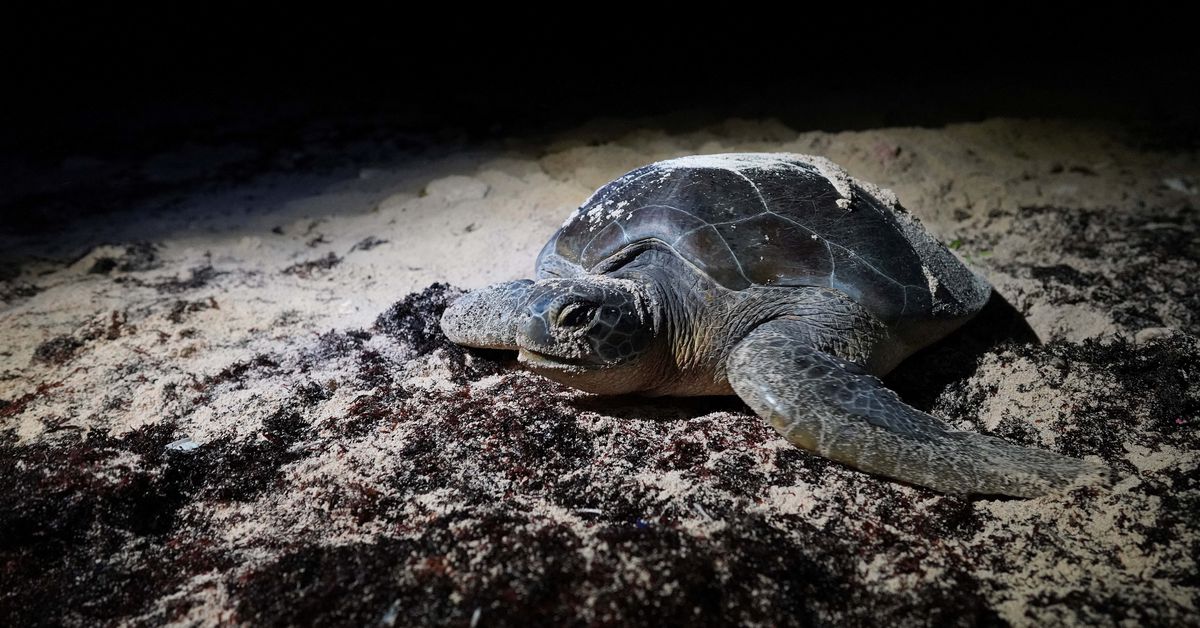 “To see them lay their eggs and to know their nests will be protected, you get the sense you are making a difference,” said Varela, who helps oversee turtle research in a national park that spans much of the peninsula.

So far, efforts by Varela and fellow researchers at the park and University of Havana have been a success. Turtle nesting here, once threatened by poaching, has stabilized and increased in some cases, published studies show, even as it has fallen off elsewhere in the tropics.

But Varela, who was raised on the peninsula’s beaches, said all is not well.

Mounds of red-brown sargassum seaweed pile up on the sand where years ago there was little, blocking the turtles’ path to nesting grounds. Dead coral, conch and rocks litter the beach, signs of increasingly frequent and intense hurricanes. And more females turtles are hatching, a phenomenon scientists attribute to rising nest temperatures.

More than two decades of research on these beaches, Cuban scientists say, corroborates concerns that climate change is heaping new problems, even in environments as undeveloped and remote as Guanahacabibes on the island’s far western fringe.

“It is frustrating because there are things that we can not control,” said Julia Azanza, a University of Havana biologist and professor who helps direct turtle research on the peninsula. “You can have a great system of conservation, or even a pristine area, and climate change still has its impact.”

Sea turtles have historically moved when temperatures or sea levels rose, seeking more favorable beaches to lay their eggs. But safe nesting havens in the region are fewer now as hotels, roads, lights and homes take over much of nearby Florida’s coast, as well as Mexico’s Yucatan Peninsula and many Caribbean islands.

“The obvious biological alternative, which is to move to other areas, is no longer an option,” Azanza said.

The virgin Guanahacabibes peninsula, protected and undeveloped, may provide safe haven for sea turtles as the impacts of climate change grow.

The peninsula lies at the crossroads of the Caribbean and Gulf of Mexico, a magnet for sea turtles navigating ocean currents.

Its white sand beaches, though battered by hurricanes in recent years, are steeper than those of low-lying keys, so less likely to be consumed by rising sea levels. They are backed by dense forest dotted with palms that offer shade.

Those elements make the park an ideal “laboratory” for observing climate change impacts and potentially adapting to them, said Osmani Borrego, another researcher and park guard at Guanahacabibes.

Cuba contributes little to the carbon emissions changing the climate, but disproportionately suffers such consequences as rising sea levels.

“Instead of fighting, it has become about learning to adapt to the changes,” Borrego said.

Signs of hope glimmer on this beach.

On a starry night in late June, a green turtle on Playa La Barca, near the tip of the peninsula, navigated rock, corals and piles of seaweed on its way to the tree line, safe from hurricane swells and the heat of the lower, exposed beach.

It settled beneath a bush, then, with labored strokes of its leathery flippers, carved out a hole in the sand. White, golf-ball sized eggs dropped, one by one, for a total of 132.

“Tonight, something fantastic occurred,” said Ryan Betancourt, a student researcher at the University of Havana, moved by the sight of the turtle choosing a nest site less prone to the hazards of climate change.

For park guard Varela, who watched alongside him, such small victories are reward enough.

“It’s an experience impossible to describe,” he said. “It gives you joy.”