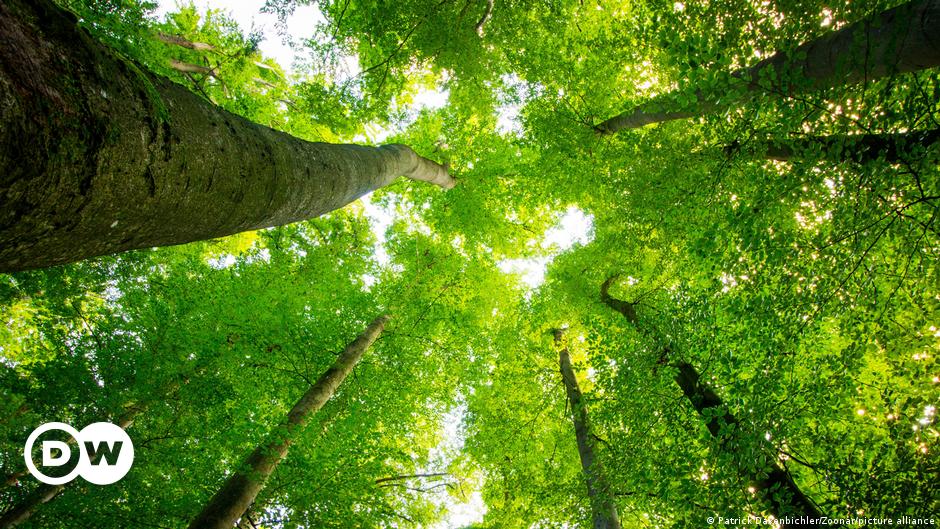 
Trees are majestic and mighty things. Not only are they impressive to look at, they also provide timber to build, oxygen to breathe and habitats for wildlife.

But the fact that they absorb carbon dioxide — the heat-trapping gas released by the burning of fossil fuels — is the main reason they’ve been touted as one of the solutions to the climate crisis.

The world’s forests store around 16 billion metric tons of carbon dioxide each year — a little over three times what European countries emit annually. But these forested areas are shrinking at an alarming rate. According to the UN’s Food and Agriculture Organization, around 10 million hectares of forest are lost each year, mainly due to the expansion of agriculture. And when trees are cut down, much of the carbon they’re storing gets released into the atmosphere.

In a bid to offset the damage, dozens of initiatives have sprouted up in recent decades seeking to plant billions of trees to suck more CO2 from the air. Governments around the world, as well as companies such as Microsoft and Nestle, have made tree-planting pledges to boost forest cover. 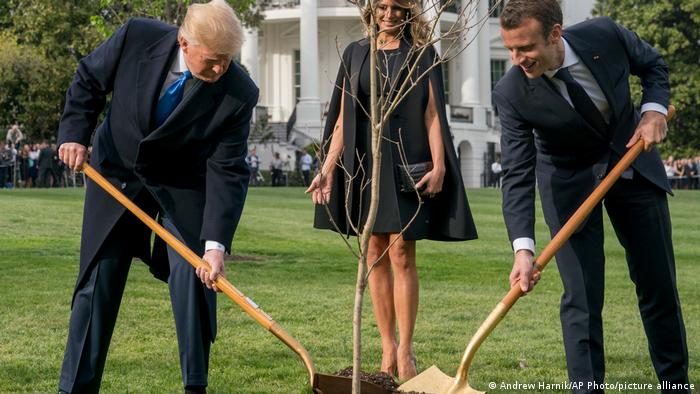 Politicians also like to plant trees, often as a symbolic gesture

“It’s really captured the public imagination and that’s good in that it gets people thinking about this. But I think the message has become oversimplified,” said conservation scientist Kate Hardwick from the Millennium Seed Bank Partnership at the UK’s Royal Botanical Gardens, Kew.

“Reforestation is part of the answer, but it’s unhelpful just to focus on the trees.”

How much of a difference can trees actually make?

During their lifetimes, trees absorb carbon dioxide to photosynthesize and keep it locked up in their leaves, roots, trunk, branches and in the soil. But just how much additional CO2 could be removed from the atmosphere by planting millions of extra trees is a topic of debate among scientists.

We emit on average just under 40 billion metric tons of CO2 each year from burning fossil fuels and land use change. Research has estimated that planting new forests and restoring existing ones could absorb between 40 and 100 billion tons of CO2. But that is only when the new trees reach maturity, which could take decades.

Another estimate, from the UK’s Royal Society, said reforestation could remove 3 to 18 billion tons of CO2 from the air per year, while improved forest management could save 1 to 2 billion tons. 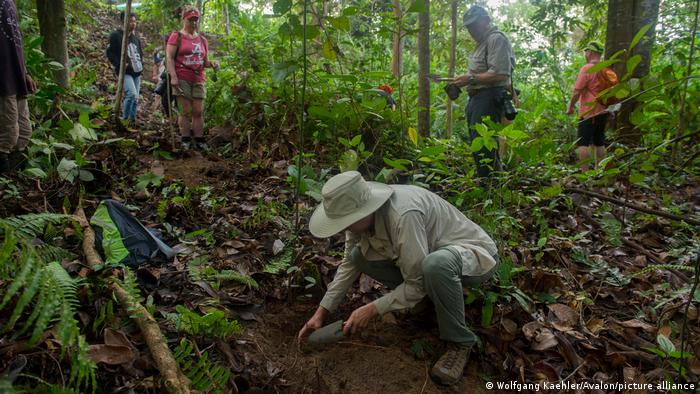 Susan Cook-Patton, a senior forest restoration scientist at the US organization Nature Conservancy, says it’s hard to come up with a concrete figure — her research “shows a hundredfold variation in carbon capture potential depending on where you are in the globe.”

Reforestation is “definitely a powerful option,” she says. But first you have to find available space where people want the trees to be planted. And then the seedlings have to be monitored and cared for over time so that they can grow into mature trees. If tree planting projects aren’t properly planned, they likely won’t succeed in the long term, resulting in a tremendous waste of resources.

Reforestation: What could go wrong?

That’s why Hardwick and other scientists at Kew published 10 golden rules for restoring forests last year. They recognized that there is “a lot of it going on and it’s being done on such a huge scale that there’s a real risk of getting it horribly wrong on a massive scale,” Hardwick said.

She says the focus should not just be on planting huge numbers of trees, but rather on restoring habitats. There are, after all, grasslands and peatlands that store a significant amount of carbon and yet typically have no trees.

A project’s success also depends on planting the right trees in the right place, otherwise the result can be damaging.

“If you plant trees on carbon rich soils like peat, for example, then more carbon will actually be emitted from the soil than you’re gaining from the growth of the trees,” Hardwick said. “So in that case, you’re actually contributing to carbon emissions.”

Another example Hardwick points to is the widespread planting of alien acacia and pine trees in South Africa’s native shrubland, which displaced local flora and led to water shortages.

“The acacias have become terribly invasive. And the South Africans are now spending millions of dollars a year on trying to remove them,” she said. 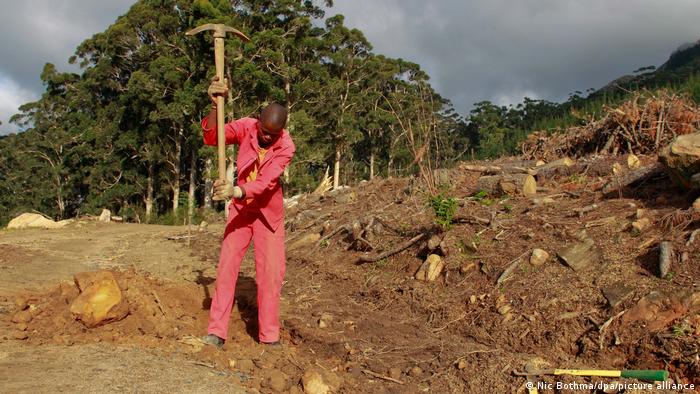 Around the city of Cape Town, which almost ran out of water during a 2018 drought, an estimated 55 billion liters of water is thought to be lost each year to non-native water-guzzling trees.

So what is the right way to handle forests?

The Kew researchers’ golden rules say protecting existing forests should be the number one priority. When it comes to carbon sequestration and biodiversity, new tree plantations can’t beat complex forest ecosystems that have developed over centuries.

Hardwick stresses that any reforestation efforts should also involve local communities and allow them to derive some economic benefit from keeping the trees intact, for example, through sustainable forestry or eco-tourism.

Reforestation projects should aim to replicate what was naturally there before, because tree species will be more likely to survive if they’re already adapted to an area. Hardwick also recommends planting a mix of native species rather than just one variety.

Monocultures are “vulnerable to fire, storm damage, and to pests and diseases, whereas a mix of species will be more stable,” she said. This resilience will become increasingly important in the future, with forests coming under mounting stress from climate change, drought and insect attacks. 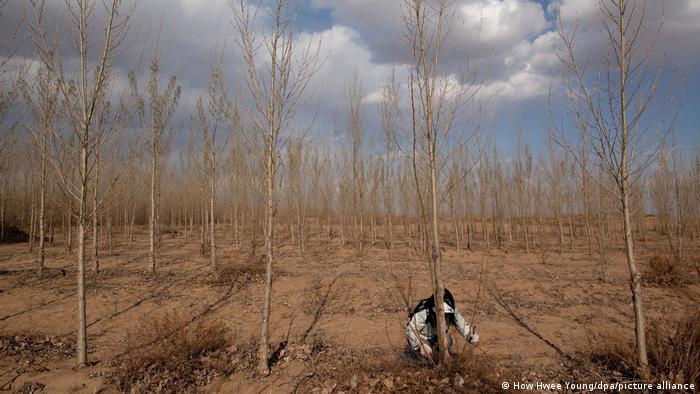 In China, farmers have planted drought-hardy poplars suited to the local soil as part of efforts to fight desertification

‘No single solution to climate change’

Trees may be powerful CO2-trapping tools, but scientists caution against relying on forests to solve the climate crisis.

“There’s no single solution,” said Cook-Patton. “But if there was one, it would be to reduce our reliance on fossil fuels.”

Protecting existing forests and planting new ones — if done properly — will be crucial. But in some cases, Cook-Patton adds, it might be best to take a step back and let nature recover on its own.

“We like to plant trees. It feels great. It’s fun to do, but often it can be cheaper and more effective and easier just to let the trees regrow on their own.”