Wildlife don’t recognize borders, nor does climate change. Conservation should keep up 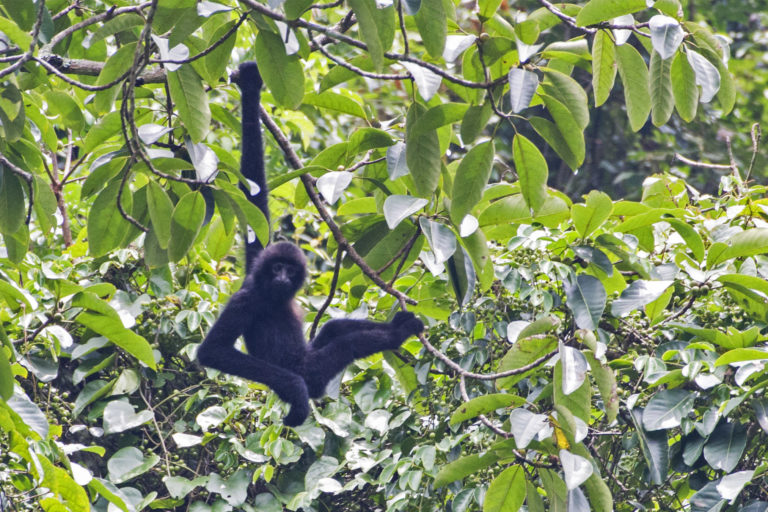 
With national borders created for geopolitical rather than ecological reasons, it’s unsurprising that the ranges of more than half of all terrestrial mammals, birds and amphibians cross at least one border.

Take, for example, the critically endangered Cao-Vit gibbon (Nomascus nasutus). Also known as the eastern black-crested gibbon, the species was thought to be extinct until 2002, when a research team found a single, small population hidden in a 2,500-hectare (6,200-acre) patch of limestone forest straddling the Vietnam-China border.

For species like this, whose range is close to or straddles international borders, what happens when climate change shrinks and shifts its suitable habitat while the human-made borders stay in place?

A recent special edition of the journal Frontiers of Biogeography seeks to address this question by bringing together six studies of species and ecosystems along the China-Vietnam border.

Ultimately, the studies highlight the importance of transboundary cooperation as the climate changes.

“Species protection is a global issue and due to climate change, habitats and distribution areas of species across different biomes will shrink or shift,” said Thomas Zeigler, coordinator for biodiversity and nature conservation projects in Vietnam and Laos for Cologne Zoo and a contributing author of one of the studies. “These are the two most important reasons why enhanced conservation cooperation across borders is required.”

Transboundary areas can pose significant challenges, as well as occasionally opportunities, for conservation. Perhaps the most obvious issue is from the 47,000 kilometers (29,200 miles) of physical barriers so far erected along terrestrial national borders — a number that is growing as politicians look to tackle issues of human migration. Physical barriers prevent animals from migrating and fragment their populations, both of which can have serious negative consequences. The challenge of coordinating activities between countries, which often have different legal systems, approaches and languages, creates other, less-visible, difficulties for transboundary conservation and research.

“It is very important to understand how species are going to adapt to the impacts of climate change,” says Minh Le, an environmental ecologist at Vietnam National University, Hanoi, who co-edited the special edition and was a contributing author on several of the studies.

Thanks to a collaborative conservation effort between China and Vietnam to protect the Cao-Vit gibbons from their main threats of hunting and habitat loss, the population is slowly recovering to a current total of 135. However, with such a small and geographically isolated population, climate change could be potentially disastrous for the Cao-Vit gibbons, so understanding how climate change might affect the population was a high priority for Le and his colleagues.

To predict what might happen with climate change, the research team built species distribution models that look at what conditions a species needs to survive, such as temperature and rainfall levels, then look at where those conditions might be found after the predicted impacts of climate change. As with any modeling exercise, a key challenge for the researchers was evaluating the accuracy of the data used to build the models.

For the Cao-Vit gibbon, the researchers’ models predict that their potentially suitable habitat is likely to shrink and fragment, although their small current range will still be suitable. The team say their study can help direct conservationists toward the most suitable places to focus their efforts for expanding the population. With much of the potentially suitable habitat close to the China-Vietnam border, the authors highlight the need for collaborative transboundary conservation initiatives.

Climate models also predict that the potential range with a suitable climate is also likely to shrink and fragment for other species covered in the journal, such as the Lichtenfelder’s tiger gecko (Goniurosaurus lichtenfelderi). Tiger geckos, as with most reptiles, are adapted to very specific conditions, making them vulnerable to climatic changes such as an increase in temperature. As with the Cao-Vit gibbon, much of the tiger gecko’s potential range is found in the border areas in northern Vietnam and southern China.

“Research and management collaborations between China and Vietnam’s authorities in the near future will be essential for establishing a species and habitat conservation area in the unprotected border region between the two countries,” Zeigler said.

While the special edition of the journal focuses only on the border between Vietnam and China, climate change is predicted to impact species in border regions around the world. According to another recent study, if we fail to reduce greenhouse gas emissions soon, more than half of climatically suitable habitat for 35% of all mammals and 29% of all birds will be in a completely different country by 2070. Another study found that the warming of the world’s oceans is pushing commercially important fish stocks in shared waters away from their current habitats and toward Earth’s poles.

There’s been a growing awareness of the importance of transboundary conservation in recent years, with organizations such as Peace Parks collaborating with national governments to create vast international conservation areas. The long-running collaboration between Serengeti National Park in Tanzania and Masai Mara National Reserve in Kenya ensures that more than a million wildebeest can continue to make their vast annual migration — one of the last great wildlife migrations on Earth. As this recent special edition highlights, transboundary conservation initiatives such as these will be increasingly important in the future.

“The special issue has already received positive feedback from colleagues and government agencies,” Le said. “There is no way to successfully conserve the [Cao-Vit gibbon] without collective efforts.”