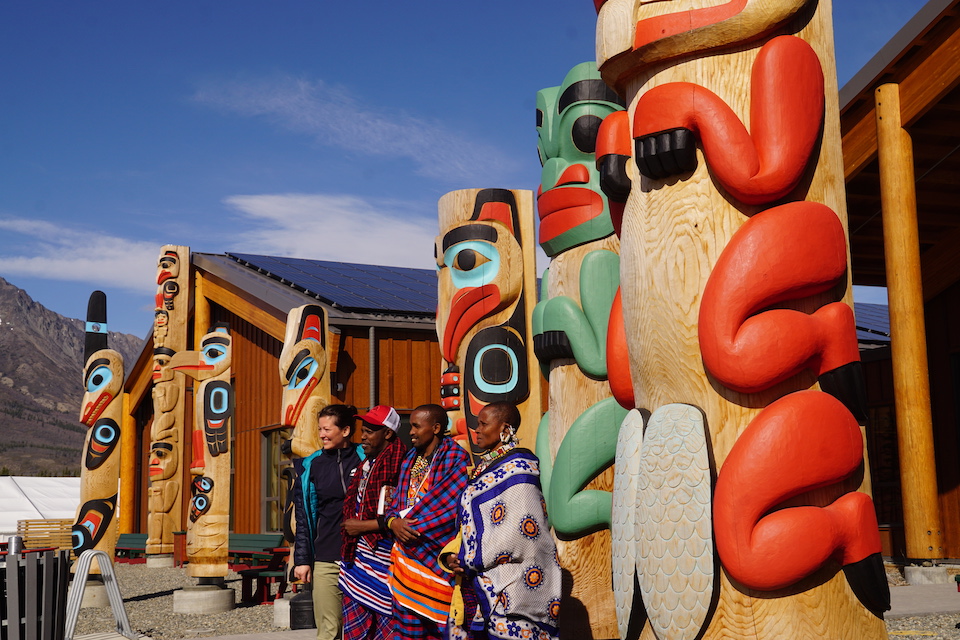 
What happens when Indigenous People lead resource decision-making on their own terms, across their own traditional territories? Communities in Tanzania and Canada are documenting and sharing their experiences, supported by a University of Victoria Department of Geography project that illustrates how partnerships can advance the United Nations Sustainable Development Goals and the UN Declaration on the Rights of Indigenous Peoples.

UVic geography grad student Kate Herchak’s thesis work is a key part of a broader, multi-faceted UVic geography research project on the international collaboration. For several weeks this summer, Tanzanian youth empowered with photography and video equipment will record and explain how they and their peers maintain connections with their own culture and traditions, gathering information and knowledge.

It’s one part of the two-year Indigenous Knowledge Bridging of Land and Water Stewardship in Tanzania and Canada project, funded by the Social Science and Humanities Research Council (SSHRC), which aims to access and mobilize Indigenous-led knowledge that will enhance land and water governance and self-determination for Indigenous Peoples in both countries, while also increasing research capacity.

UVic was recently recognized internationally for its impact in research, operations and partnerships that protect the environment and improve living conditions and the well-being of society. The global assessment by Times Higher Education ranked UVic 12th among 1,400 universities for how it helps advance the UN’s 17 Sustainable Development Goals (SDGs), a global blueprint for action for people, our planet and prosperity.

In Tanzania, the Enguserosambu Forest Trust (EFT) is a community forest management body mandated to draw upon cultural traditions in its operations. UVic researchers say it offers a model that can be applied to other communities, and will use community-driven, participatory research methods to increase capacity of the participating Indigenous communities in Tanzania and Canada, particularly the Loita Maasai and the Carcross/Tagish First Nation of the Yukon.

For most of the Canadian participants, this summer’s trip to Tanzania will last just two weeks. But it will be a six-week adventure for Herchak, who is Inuk on her father’s side from Kuujjuaq, Quebec. Her work with Maasai youth explores context, culture and risk: how youth maintain cultural connections and knowledge despite increasing pressure to relocate to larger cities, work that has important links to Indigenous communities in Canada and around the world.

Indigenous People have always been experts in international development, and part of this work is recognizing all this knowledge that Indigenous People have. This presents a special opportunity for Indigenous youth to be partners in research and to push the narrative on the role of youth within Indigenous economics, and what the parallels are that we can learn from.”

Although both excited and nervous about completing her master’s thesis next year, Herchak, as a research assistant for UVic’s anchor project in Tanzania, also intends for her own research to be presented back to the Maasai youth and communities from which it is drawn, hopefully to amplify and broaden its impact.

“I want this work to be something that matters and has an impact on people. I want it to be medicine,” she says, acknowledging the metaphor is borrowed from Margaret Kovach and Kathy Absolon, Indigenous scholars who reference collecting knowledge through research and transforming it into tea for others to share.

That notion also carries through the broader project—both in its scope and its commitment to Indigenous leadership and ownership of the scholarship –key foundations for Indigenous partnerships.

“Indigenous Peoples, including the Maasai in Tanzania and First Nations in Canada, are working to protect their natural environment while seeking to assert their full agency in political, social and economic decision-making,” the researchers declared in seeking SSHRC support for the project. “They are doing so under ever-increasing pressure from extractive resource sectors and government priorities for economic development and foreign investment.”

“We value shared ownership in the research process and emphasize community action and knowledge bridging,” the researchers add. “This approach ensures the ownership, control, access and possession of all research activities within Indigenous territories resides with them.”

The location itself is also crucial to the work. The Enguserosambu Ward is surrounded by World Heritage sites, including the Serengeti National Park, Ngorongoro Conservation Area and Maasai Mara National Reserve in Kenya.

“We bring together Indigenous Nations from two very rich culturally and biologically diverse regions that have common shared histories in terms of colonization and central government control that were then followed by relative autonomy related to land-use governance,” the SSHRC proposal points out—a situational link that makes the exchange of information valuable to all the participants.

The seemingly unlikely pairing of the Maasai with BC and Yukon First Nations builds on a 2019 project when, supported by a SSHRC Connections grant, three representatives from the Loita Maasai of Tanzania visited on a cultural tour and met with a number of BC and Yukon First Nations to discuss land and water management and traditional lands (view video). Among those were the Carcross/Tagish, who met with a Maasai delegation in Victoria again this spring to make a public presentation about sharing knowledge of land and water stewardship.

“This is a wonderful opportunity to share experiences on all kinds of efforts by different Nations to assert self-determination and the various methods they’ve employed,” says Crystal Tremblay, a UVic assistant professor of geography whose research focuses on environmental governance and participatory community-based research. “For Canadian First Nations and the Maasai, there are similar pressures around climate change, resource extraction and cultural tourism. It is an urgent time for them—we’re looking at how knowledge bridging between different Indigenous groups can foster solidarity.”

A month-long geography field school in Tanzania took place later in 2019, strengthening an existing partnership between UVic and the Loita Maasai that developed through the Kesho Trust and founding director Bruce Downie, a UVic adjunct geography professor.

This August, another delegation of UVic faculty and student researchers plus members of the Carcross/Tagish First Nation will spend significant time in Tanzania conducting research, as well as setting up and planning another geography field school set to take place in summer 2023.

This project is one of a growing number of partnerships that exemplify UVic’s  commitment to the UN’s Declaration on the Rights of Indigenous Peoples and the 17 Sustainable Development Goals—particularly SDG 17, Partnerships for the Goals.

That commitment is also at the core of UVic’s recently announced partnership with the United Nations Institute of Training and Research (UNITAR), establishing an accredited International Training Centre for Authorities and Leaders (CIFAL)—the first on North America’s West Coast and only the second in Canada. CIFAL Victoria will connect the region with the global community and support international knowledge-sharing and partnerships, with a focus on four interconnected areas of strength, including: decolonization and Indigenous knowledge; oceans, climate and sustainability; innovation and entrepreneurship; and global health and well-being.

Those sustainable development goals “are very much embedded” in the research being undertaken at UVic, says Tremblay, who is also CIFAL Victoria’s associate director.

“The opportunity to bring Indigenous People from different corners of the world together to share experiences on the ways they are advancing land and water stewardship at this time is really important,” Tremblay says. “Especially when considering the ways in which western capitalism has not worked. Indigenous practices and connections to the land and water have so much to offer us.”

“We have so much to learn and we need a radical transformation, not today—yesterday.”