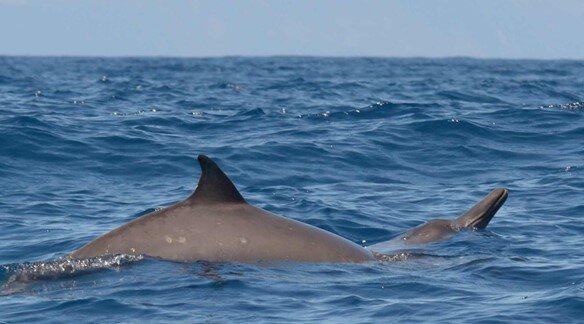 
An international team of biologists has successfully used biologgers to reveal insights into the lifestyle and hunting behavior of the little-known species Sowerby’s beaked whale. The team’s first results show that these dolphins have a surprisingly different, much faster lifestyle than related species. The research was led by Fleur Visser of the University of Amsterdam (UvA) and the Royal Netherlands Institute for Sea Research (NIOZ). The results were published on 12 May in the Journal of Experimental Biology.

Beaked whales include a number of species of marine mammals that can perform record-breaking dives. They routinely visit depths of up to several kilometers during hour-long hunting trips searching for deep-sea squid and fish. Due to their elusive nature and limited surface presence, little is known about their behavior.

With 16 species, the so-called Mesoplodont whales form the largest genus of cetaceans. The genus includes some of the least-known marine mammals—so much so that three new species of these rhinoceros-sized whales have been discovered in just the past 30 years. Most of the species are physically very similar and are all assumed to be specialized deep-sea predators. Moreover, they often occur in the same areas and forage at similar depths. This raises the question as to how they are able to avoid competition among themselves for the same prey.

For a few beaked whale species, biologging tags, attached to their backs with suction-cups, have revealed that they typically have a low-energy lifestyle: they are able to perform extreme deep dives through slow, energy-conserving swim-styles and hunting strategies. But Sowerby’s beaked whales had never been tagged before. However, after years of effort, the research team were able to deploy biologging tags on two Sowerby’s beaked whales. The tags recorded detailed information about the diving, movement and echolocation strategies of these extremely shy animals, providing the first opportunity to investigate their foraging behavior. This enabled direct comparison of their hunting strategies with those of their close relatives, the slow-moving Blainville’s beaked whale.

Much to the researchers’ surprise, Sowerby’s beaked whales differ strongly from other Mesoplodon species in their swimming and hunting strategies. While targeting a similar foraging depth (800–1300 m), they consistently swim faster, perform shorter deep dives, and echolocate at a faster rate, with higher frequency clicks. This first record of a “fast” beaked whale suggests that Mesoplodon whales exploit a broader diversity of deep-sea niches than hitherto suspected. The deep-sea is a rich and diverse hunting ground for marine mammal predators, who have clearly developed a wider range of specialized strategies to be able to exploit it than was previously known. The marked deviation of Sowerby’s beaked whales from the typically slower behavior of other beaked whales also has potential implications for their response to man-made sounds, which appear to be strongly behaviorally-driven in other species.