To conserve the vibrant diversity of Central Africa’s forests, include Indigenous people (commentary) 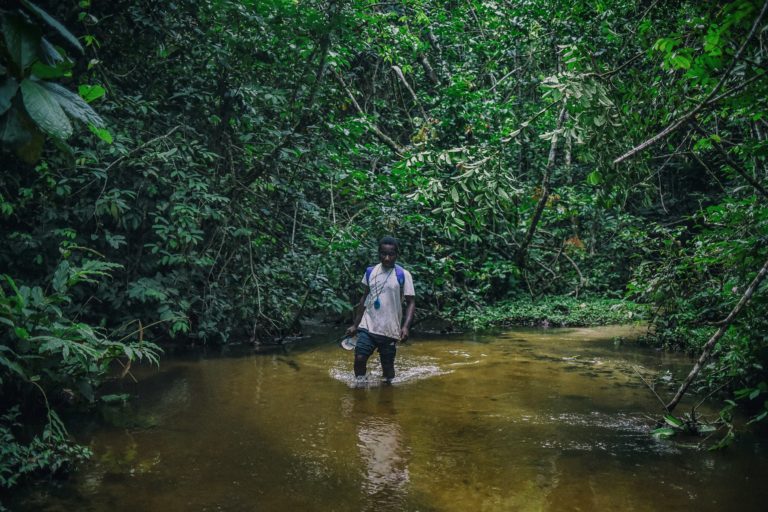 
Our footsteps intermingled with the sounds of rain dripping through the canopy as my eyes examined the surrounding green vegetation, which was usually so vibrant, but was now subdued as the dark skies above concealed the light and darkened our path. My eyes switched back to scanning the elephant path before me as I watched out for roots and red sand that had now fervently mixed with the rain and developed into slick red mud. Only a few footsteps ahead of me was Bonga Bertin, a forest tracker working with me at Dzanga Bai.

While the wet rainforest soundscape saturated my ears, Bonga’s had been able to pick up the rustles of a forest elephant foraging nearby. As a general field-safety precaution, we needed to give the elephant space to minimize the chances of human-elephant conflict. We quickly retreated and Bonga found us a new and safer elephant path back to our field camp. As a member of the BaAka community in the Dzanga-Sangha Protected Areas (DSPA), Central African Republic (CAR), Bonga has an understanding of this forest that is unmatched by most.

The BaAka, an Indigenous group located in the northern Republic of Congo and southwestern CAR, and culturally distinct from the Baka people, have led a semi-nomadic lifestyle that has persisted largely unchanged over millennia as they roamed the forests of the Congo Basin. However, with the establishment of protected areas in the region came significant changes to the BaAka lifestyle. This includes reduced access to their critical forest resources and experiences of reported human rights abuses.

Yet, the movement to support BaAka traditions and culture and incorporate their knowledge on sustainable forest management into a protected area has only recently gained momentum. If conservationists working in Central Africa are to aid in the protection of these forests successfully, it is imperative that this momentum continues. A new human rights-based approach to sustainable forest management should be implemented to deal with the region’s biodiversity loss effectively and equitably.

Some may know of the BaAka for their spirit play: an immersive form of theater through which the BaAka connect with the forest and communicate and reaffirm a deep relationship of mutual support and respect. This respect is reflected in their sustainable forest practices, such as their regenerative methods of harvesting wild yams for the BaAka and animals, such as forest elephants and giant forest hogs.

Aspects of BaAka life, such as music and hunting, are intimately tied to their dependence and respect for the forest. This relationship with the forest has allowed the BaAka to thrive in the Congo Basin for millennia, up until they were expelled from their homelands by regional governments. Officials did this due to the belief that nature does best if left “untouched” by humans, a colonial philosophy that gained momentum during the 19th century U.S. conservation movement. However, this is a false narrative. The “wilderness” of Central Africa in question had been shaped and managed by the BaAka.

With the removal of people from their homelands came the great issues that both the BaAka and conservation practitioners continue to grapple with today. Fear of being apprehended by ecoguards for subsistence hunting in the forest has driven BaAka community members to stay in roadside villages rather than in their traditional forest camps. On the other hand, commercial bushmeat hunting is swiftly growing as accessibility to the forest increases with new logging roads.

As resource extraction demands grow, members of the BaAka community are often employed by logging companies as workers or even by teams of poachers as forest guides responsible for finding the resource in question. In these scenarios, the BaAka must choose between the opposing outside interests that are destroying their ancestral home while still needing to secure their livelihoods for themselves and their families. People residing in the roadside villages are also experiencing a rapid decline in their cultural knowledge as it has become increasingly difficult to share this knowledge and their likano, forest tales, with younger generations.

As the role of Indigenous stewardship and knowledge is increasingly recognized on the international stage – and reported abuses by ecoguards has gained attention – implicated conservation organizations have installed programs to include and support BaAka people. The World Wildlife Fund (WWF), which manages the DSPA with the CAR government, is supporting local groups who are working to address these negative impacts. WWF is currently supporting a non-profit group in the DSPA called Ndima Kali, which is focused on promoting the culture and traditional knowledge of the BaAka, especially in youth, and helping community members fight discrimination and exploitation.

Local conservationists are supporting the renewal of BaAka culture in other ways. Phael Malonga, a researcher working with the Wildlife Conservation Society and The Elephant Listening Project in Nouabalé-Ndoki National Park (NNNP) in the Republic of Congo, has been working with Lih Ngolio, a musical and theatrical group of the BaAka Bangombé and Bambezelé tribes from Bomassa (which was originally named Ngolio, which means Eagle), a village located outside of NNNP’s base. Phael and others are hoping that those who get involved with Lih Ngolio can reconnect with BaAka traditions and culture through artistic expression.

Conservationists from the Elephant Listening Project (ELP), a research group within the K. Lisa Yang Center for Conservation Bioacoustics at the Cornell Lab of Ornithology, recently took the first step towards building the community’s capacity to conserve their natural heritage during a workshop held in the DSPA. During the workshop, ELP researchers from NNNP trained two of their ELP colleagues from the DSPA on passive acoustic monitoring, a wildlife monitoring tool that ELP researchers use to study forest elephants and support their conservation. Bonga was one of the DSPA members trained and will be the first of many ELP researchers from the BaAka community as the ELP continues to deepen its focus on conservation capacity building of Indigenous researchers in the region.

Much of the world’s biodiversity is intact because of the communities that have lived in and managed these biodiverse hotspots for millennia. A 2019 report completed by the U.N. Intergovernmental Science-Policy Platform on Biodiversity and Ecosystem Services found that Indigenous peoples are better at protecting biodiversity on their lands than anyone else.

Conservation groups have an ethical responsibility to support BaAka communities and sustainable ways of life. As conservationists entering a new era of conservation in Central Africa, the achievement of a human rights-based conservation approach should acknowledge the critical ways the BaAka lead local conservation efforts and incorporate their forest tenure rights as a measure of our overall conservation success.

Conservationists in Central Africa must also practice community-based conservation and engage the BaAka in local conservation efforts by integrating their traditional ecological knowledge and supporting the management of their natural heritage. Organizations should provide the communities with educational opportunities to learn about established research methodologies by providing critical research equipment and financial resources.

BaAka traditional ecological knowledge and management of their forests remains unmatched, and we would do well to pay close attention to it. After centuries of extensive exploitation and colonialism, the remaining biodiversity of their forests is a testament to the necessity of swiftly entering into this new era of community-based conservation in Central Africa.

Banner image: Bonga enjoying the feeling of the cooler part of our walk through the forest one afternoon in 2018. Image courtesy of Ana Verahrami/Elephant Listening Project.

Related listening from Mongabay’s podcast: A conversation with Ana Verahrami, a research analyst with the Elephant Listening Project, where she explains why forest elephants’ role as keystone species makes their survival crucial to the wellbeing of tropical forests and their other inhabitants in Central Africa. Listen here:

Delta-8 THC is one of the most talked-about...
Read more
Previous articleEcological functions of streams and rivers severely affected globally
Next articleCall to set date for UN nature summit delayed 4 times