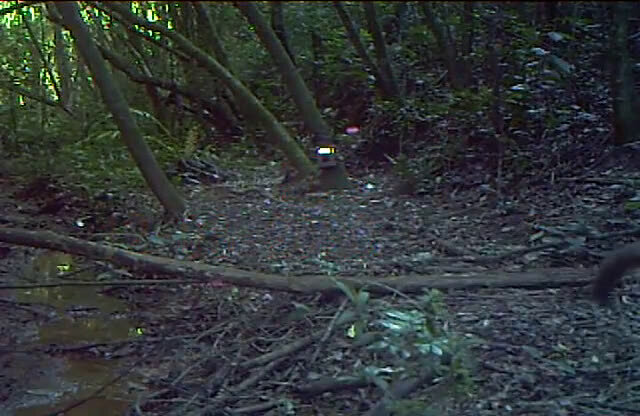 
You may assume that metropolitan areas are devoid of wildlife, but that is very far from the truth. The remaining green spaces within the urban matrices of large cities can serve as corridors or stepping stones for wild animals. Sometimes, even threatened mammal species end up using them.

On August 12, 2020, a research team from Brazil recorded a South American coati in Canoas, the fourth most populous and densely urbanized city in the southernmost state of Brazil, Rio Grande do Sul. The animal was detected with a camera trap during a Masters research project conducted at the Canoas Airbase, one of the last green spaces remaining in the municipality.

Widely distributed throughout the continent, the South American coati is a medium-sized carnivore living on trees and feeding mainly on small invertebrates and fruits. The species is classified as Vulnerable in Rio Grande do Sul, and it’s considered threatened mainly because of the loss of its forest habitats.

The study that recorded an individual in the urban area was conducted as part of a partnership between the Canoas Airbase and La Salle University. Led by Dr. Cristina Vargas Cademartori from La Salle University, the research team was made up of Diego Floriano da Rocha (Doctoral student), Thaís Brauner do Rosario (Masters student), Ana Carolina Pontes Maciel (biologist at the Canoas Airbase), and Duana Suelem Alves (undergraduate student). They described in detail the record and the study area in a paper in the open-access journal Neotropical Biology and Conservation.

The researchers were surprised to find the coati in the midst of a dense urban area. Although the species is not considered threatened in the majority of its area of distribution, its populations have been in decline because of habitat loss and hunting.

“This record confirms the capacity of this species to use environments that have been changed by anthropic activity,” the researchers write in their paper, adding that, because of all the food that humans leave behind, urban environments can in fact favor the establishment of more adaptable species like the coati.

The discovery highlights the importance of urban green spaces for wildlife conservation. “This is very important for defining appropriate conservation measurements for endangered species, especially beyond protected areas,” the authors conclude.

In the Atlantic Forest, the lowland tapir is at risk of extinction

Delta-8 THC is one of the most talked-about...
Read more
Previous articleModel pinpoints glaciers at risk of collapse due to climate change
Next articleWildfire smoke accelerates glacier melt, affects mountain runoff