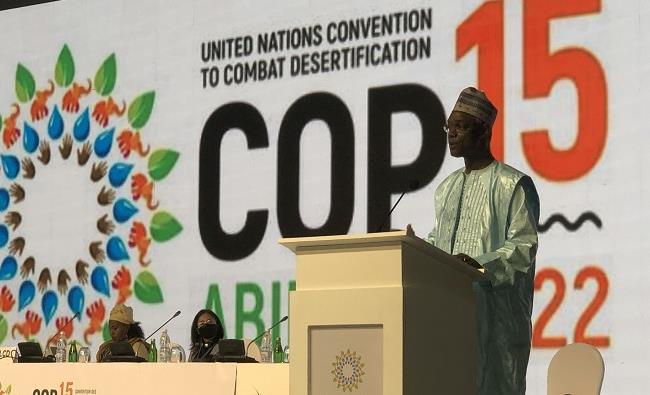 
Executive Secretary of the United Nations Conference to Combat Desertification (UNCCD), Ibrahim Thiaw, and a high-level representative of Côte d’Ivoire, will at a conference on Friday, May 20, 2022, present the outcomes of the 15th session of the Conference of the Parties (COP15) to the UNCCD taking place in Abidjan, Côte d’Ivoire.

The key outcomes expected from COP15, which opened Monday, May 9, and closes on May 20, include a set of decisions agreed by 196 countries and the European Union that are Parties to the UN’s land management treaty.

The treaty seeks to:

In addition to the formal COP15 decisions, two political declarations were issued, namely:

During the Heads of State Summit, President Alassane Dramane Ouattara also launched the Abidjan Legacy Programme, which aims to boost long-term environmental sustainability across major value chains in Côte d’Ivoire while protecting and restoring forests and lands and improving communities’ resilience to climate change, which will require mobilisation of US$1.5 billion over the next five years.

Heads of State, ministers and close to 7000 delegates from 196 countries attended the conference on the future of land management, alongside private sector, civil society, women, youth leaders and media representatives. A high-level segment took place from May 9 to 10.

The COP15 theme, “Land. Life. Legacy: From scarcity to prosperity”, is a call to action to ensure land, which is the lifeline on this planet, continues to benefit present and future generations.

UNCCD unites governments, scientists, policymakers, the private sector and communities around a shared vision to restore and manage the world’s land.

"We are very pleased to have obtained this...
Read more
Previous articleQuebec beekeepers call for emergency aid as hives suffer catastrophic losses – Montreal
Next articleGet companies to pay for wildlife recovery