The ocean that binds us: How indigenous collaboration is helping to protect the moana 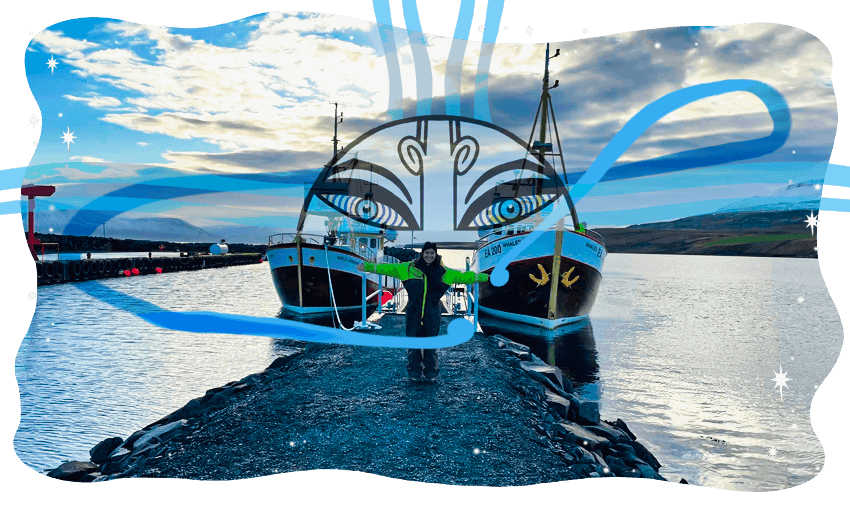 
Te Aomihia Walker, a marine biology graduate and policy analyst with Te Ohu Kaimoana, has spent six months in Iceland researching how indigenous knowledge can improve the health of our overfished oceans.

For years, commercial fisheries have dominated the management of our ocean bodies. Now, a tenth of fish stocks globally are on the brink of collapse.

This comes from a report by The Minderoo Foundation (a philanthropic organisation backed by Australian billionaire Andrew Forrest) released in 2021.

It found nearly half of fish stocks assessed had been depleted to less than 40% of their pre-fishing population. And, a tenth of fish stocks are on the brink of collapse.

The report identifies rising sea temperatures, ocean acidification and overfishing as the driving factors for this depletion.

In the face of this existential threat to our moana, there is a growing political awareness of the need to consider more holistic models of fisheries and oceanic management.

This is where Te Aomihia Walker (Ngāti Porou, Rongowhakaata), a marine biology graduate and policy analyst for Te Ohu Kaimoana, is playing a part.

“A lot of indigenous people know [that holistic thinking is needed],” says Walker. “Our people have thousands of years of observation of the environment that can be very useful for how we then come up with management plans for fisheries to rebuild stocks.”

Walker’s passion for “how indigenous knowledge can add value to the management of fisheries” was sparked after graduating from Victoria University and taking up a role with the Māori fisheries trust, Te Ohu Kaimoana.

Being selected as a fellow for the Unesco’s GRO Fisheries Training programme was an opportunity to expose Iceland’s fishing industry, which is heavily focused on commercial fishing, to indigenous knowledge, Walker says.

She spent six months with the Marine and Freshwater Research Institute in Iceland, where her research focused on a policy in fisheries called “landing and discards” – what fishers can return to the port and land, and what they must return to the ocean.

“I looked at it through an indigenous lens known as ‘etuaptmumk’, by Mi’kmaq elder Dr Albert Marshall from the Eskasoni First Nation, which he defines as learning to see through one eye with indigenous knowledges and ways of knowing, and through the other eye with western knowledge, and using both eyes together for the benefit of all.”

Walker capitalised on her own whakapapa connections and iwi mātauranga, bringing in her Ngāti Porou tikanga to her research as a mihi to the collective effort of her iwi to get her to Iceland.

As part of her experience, Walker took part in a panel that explored the role of indigenous guardianship in addressing the existential challenges of climate change, and its threats to the ecosystem and biodiversity.

“I was trying to help them understand… that there’s not only one way of managing fisheries.

“While we learnt about the international frameworks and guidelines that are helpful, there’s so much value in hearing the experiences and elevating the knowledge of indigenous peoples and the thousands of years they’ve been able to look after and manage their environments.”

However, Walker says while indigenous fisheries management frameworks exist, the political landscape is still not open to “fully dissolving that rangatiratanga to iwi”.

Within her own iwi of Ngāti Porou, progress has been made, with the passing of the Ngā Rohe Moana o Ngā Hapū o Ngāti Porou Act 2019.

“That’s going to allow hapū to develop their own customary fisheries plans, where they can pretty much make bylaws for their rohe moana, particularly around non-commercial fishing, but also maybe have a little influence in there on the commercial sector as well,” says Walker.

However, hapū aren’t currently resourced to monitor and get people complying with tikanga and laws that will come into effect, which is where she says the government needs to play a role in funding hapū to do this.

“There are definitely frameworks, I just don’t think they’re being as well implemented as they were intended under some of the promises made in the fisheries deed of settlement back in the 90s.”

Speaking with iwi Māori fisheries, Walker says tikanga is leading a lot of the operational policies of companies, but there is more work needed to bring Māori tikanga into commercial fishing.

For instance, in respect to landing unwanted catches, where a licensed fish receiver doesn’t want some of the fish a commercial fisherman has caught, the regulation is that it might be required to be dumped in landfill.

Walker points out that where she is from, that doesn’t align at all with the tikanga of “using all of the fish”.

This is where there needs to be more collective iwi endorsement of tikanga to bolster these practices across the board, she says.

Working alongside fellows from 17 countries, with a majority of representatives from African nations, Walker says it opened her eyes to indigenous cultures across the world, who were in turn exposed to mātauranga Māori.

She hopes that through her fellowship, she has helped open the door for other indigenous people, and played a role in growing international awareness of indigenous perspectives and approaches to the moana.