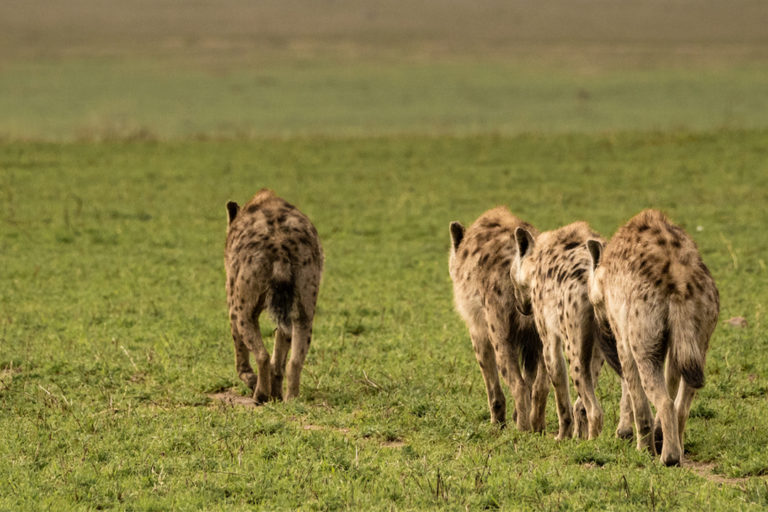 
Spotted hyenas appear to be adapting to climate change in Tanzania’s famous Serengeti National Park, surprising researchers who expected changing rainfall patterns would force the carnivores to spend more time searching for prey than tending to their cubs.

It’s getting wetter in the Serengeti, according to rainfall figures gathered over the past 30 years. The timing of migrations of large herds of herbivores like blue wildebeest (Connochaetes taurinus), well known for their mass movement across the length of the park, is also changing.

That means dinner for the hyenas (Crocuta crocuta) isn’t always where it should be, according to a new study.

“In the last decade the migratory herds have been arriving later than previously in our studied hyena clan territories,” said Morgane Gicquel, lead author of the study published in the journal Ecosphere.

Hyenas prey on wildebeest and other migratory species in the Serengeti, like zebra (Equus quagga) and Thomson’s gazelle (Eudorcas thomsonii). When those herds are absent, the hyenas target non-migratory animals, including buffalo (Syncerus caffer), and antelopes like impala (Aepyceros melampus) and topi (Damaliscus lunatus).

As the dry season sets in around June, the wildebeest migrate to the northwest of the park in search of fresh grazing and water. When the rains begin to fall in October, they begin their return journey to the Serengeti’s southern plains.

It’s one of the biggest mammal migrations on Earth, with more than a million wildebeest and hundreds of thousands of zebras and gazelles taking part.

Gicquel and her colleagues looked at 30 years of data from the dens of three different hyena clans in Serengeti National Park, which covers 1.48 million hectares (3.65 million acres) in northern Tanzania. 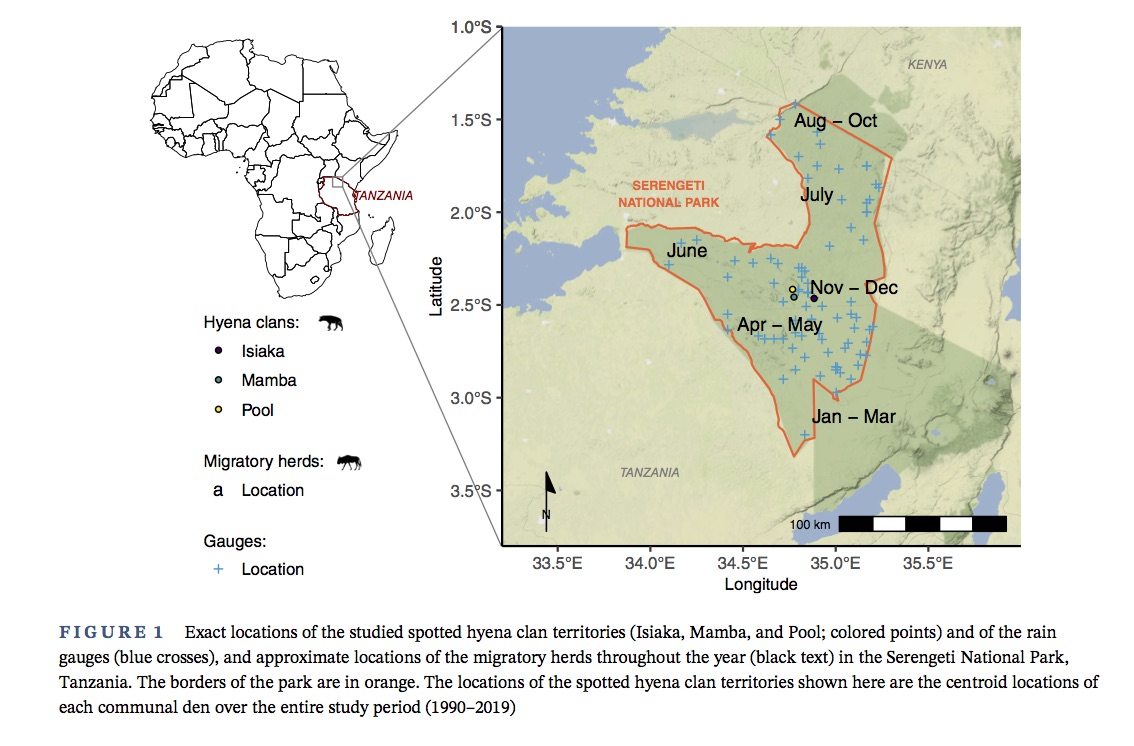 Hyenas breed all year round, and the researchers expected to see the time that lactating females spent at their dens reduced as they spent longer on the trot in search of food to fuel their milk supply.

Higher-ranking members of the hyenas’ female-headed clans have first dibs at resident herbivores, meaning that when migratory herds are absent, other females, especially low-ranking ones, have to “commute” long distances — up to 140 kilometers (nearly 90 miles) — from their dens in search of food.

The actual distances covered by hyenas foraging along established, winding routes across the plain are even greater, meaning they are sometimes only able to return to their dens to feed their young every few days.

But while the data show that increased rainfall has coincided with a decreased presence of migratory herds in the hyenas’ territory, lactating females are spending just as much time with their cubs as usual.

If the herds of wildebeest are further away for larger parts of the year, the hyenas are apparently having little trouble finding them, including by relying on “social learning” from other clan members.

Unchanged hyena den attendance appears to align with the idea that spotted hyenas are generally flexible and robust in response to changes in their environment, Gicquel said. “Spotted hyenas have always used social learning to find food,” she told Mongabay, adding that the animals are often seen “commuting” in small groups, sometimes comprising a mother leading her offspring.

“This would suggest that spotted hyenas know where to go to find the herds.”

Climate change may alter things even more dramatically in the future, by ushering in more intense and longer rainy seasons. Under such conditions, “migration would probably be delayed as the herds may stay longer in certain areas, or migration routes could change,” Gicquel said.

“One extreme scenario could be that in many, many years there will be no reason for herbivores to migrate as they will always have nutritious food.”

If so, the hyenas might establish their territories closer to those herds or commute all year round.

Eve Davidian, co-director of the Ngorongoro Hyena Project, which conducts long-term studies of hyena clans in the Ngorongoro Conservation Area, southeast of the Serengeti, shares Gicquel’s view of the spotted hyena as a highly adaptable species.

“This study does nicely show how flexible spotted hyenas are in their behavior and how well they can cope with extreme environmental changes and increased unpredictability,” Davidian, who was not part of the Serengeti study, told Mongabay.

She said that beyond the borders of well-preserved ecosystems like the Serengeti, however, the picture may be different and the resilience of spotted hyenas less certain.

“In most other areas where spotted hyenas and other large carnivores live, hyenas may be exposed to cumulative adverse factors, such as habitat fragmentation and intense human activity,” she said, adding that this might prevent them from “fully expressing their behavioral flexibility.”

What are the secrets of spotted hyenas? Candid Animal Cam meets the mammal with bone-breaking jaws

Banner image: A pack of hyenas in Tanzania. Image courtesy of Sonja Metzger.

...
Read more
Previous articleCall to set date for UN nature summit delayed 4 times
Next articlenegotiations must come out of the shadows – Sandrine Maljean-Dubois