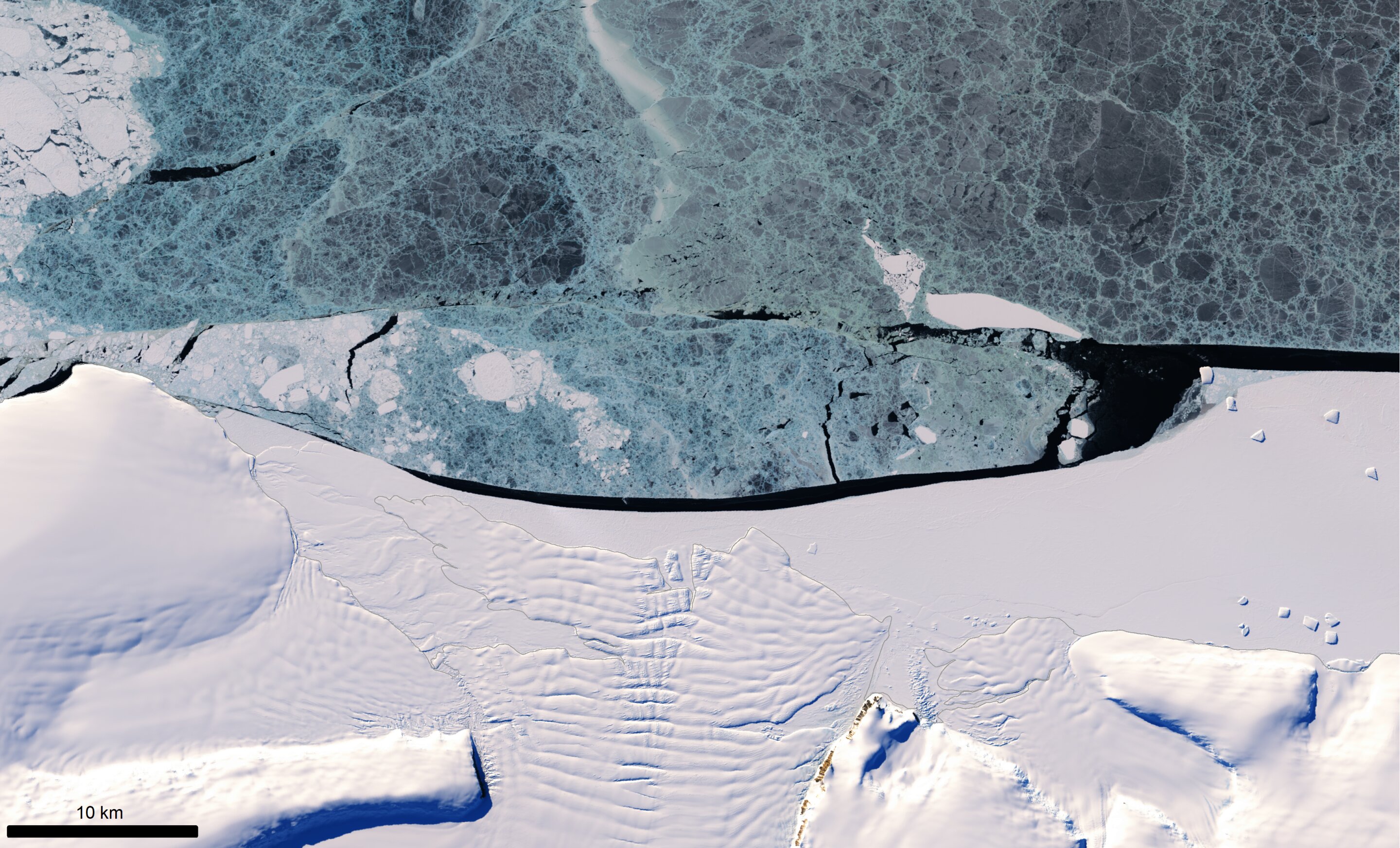 
Despite the rapid melting of ice in many parts of Antarctica during the second half of the 20th century, researchers have found that the floating ice shelves which skirt the eastern Antarctic Peninsula have undergone sustained advance over the past 20 years.

Ice shelves—floating sections of ice which are attached to land-based ice sheets—serve the vital purpose of buttressing against the uncontrolled release of inland ice to the ocean. During the late 20th century, high levels of warming in the eastern Antarctic Peninsula led to the catastrophic collapse of the Larsen A and B ice shelves in 1995 and 2002, respectively. These events drove the acceleration of ice towards the ocean, ultimately accelerating the Antarctic Peninsula’s contribution to sea level rise.

Currently, the jury is out on exactly how sea ice around Antarctica will evolve in response to climate change, and therefore influence sea level rise, with some models forecasting wholescale sea ice loss in the Southern Ocean, while others predict sea ice gain.

Now, an international team of researchers, from the Universities of Cambridge and Newcastle in the UK, and the University of Canterbury in New Zealand, have used a combination of historical satellite measurements, along with ocean and atmosphere records, to get the most detailed understanding yet of how ice conditions are changing along the 1,400-kilometer-long eastern Antarctic Peninsula.

They found that 85% of the ice shelf perimeter in this part of Antarctica has advanced since the early 2000s, in contrast to the extensive retreat of the previous two decades. The advance is linked due to decade-scale changes in atmospheric circulation, which has led to more sea ice being carried to the coast by wind.

The results, reported in the journal Nature Geoscience, suggest that sea ice plays an important role in stabilizing ice shelves, much like ice shelves themselves stabilize and buttress ice sheets.

“We’ve found that sea-ice change can either safeguard from, or set in motion, the calving of icebergs from large Antarctic ice shelves,” said Dr. Frazer Christie from Cambridge’s Scott Polar Research Institute (SPRI), the paper’s lead author. “Regardless of how the sea ice around Antarctica changes in a warming climate, our observations highlight the often-overlooked importance of sea-ice variability to the health of the Antarctic Ice Sheet.”

In 2019, Christie and his co-authors were part of a SPRI-led expedition to study ice conditions in the Weddell Sea offshore of the eastern Antarctic Peninsula, a notoriously difficult part of the Southern Ocean to reach given the thick and year-round presence of sea ice.

“During the expedition, we noted that parts of the ice-shelf coastline were at their most advanced position since satellite records began in the early 1960s,” said expedition chief scientist and study co-author Professor Julian Dowdeswell, also from SPRI.

Following the expedition, the team used satellite images going back 60 years, as well as state-of-the-art ocean and atmosphere models, to investigate in detail the spatial and temporal pattern of ice-shelf change.

So what caused the ice shelves to advance? In the absence of atmosphere and ocean warming over the past 20 years, the dominant control was found to be a change in regional wind patterns over the Weddell Sea, which served to push sea ice against the ice shelves.

Between 1985 and 2002, in contrast, wind conditions in the same area caused sea ice to move away from the coast. By removing the buttressing effect of the sea ice and exposing the ice shelves to damaging ocean waves, stress on the ice shelves increased, ultimately leading to calving of icebergs.

In almost all cases throughout the satellite era, calving from the eastern Antarctic Peninsula’s ice shelves only occurred during or shortly after the removal of sea ice in some form.

However, it’s possible that this period of ice advance may be ending. Since 2020, there has been a notable increase in the number of icebergs breaking away from the eastern Antarctic Peninsula. “It’s entirely possible we could be seeing a transition back to atmospheric patterns similar to those observed during the 1990s that encouraged sea-ice loss and, ultimately, more ice-shelf calving,” said co-author Dr. Wolfgang Rack from the University of Canterbury.

The work was made possible thanks to the free, open-access availability of the historical satellite record by space agencies and partners including NASA and the joint European Commission—European Space Agency Copernicus Program.