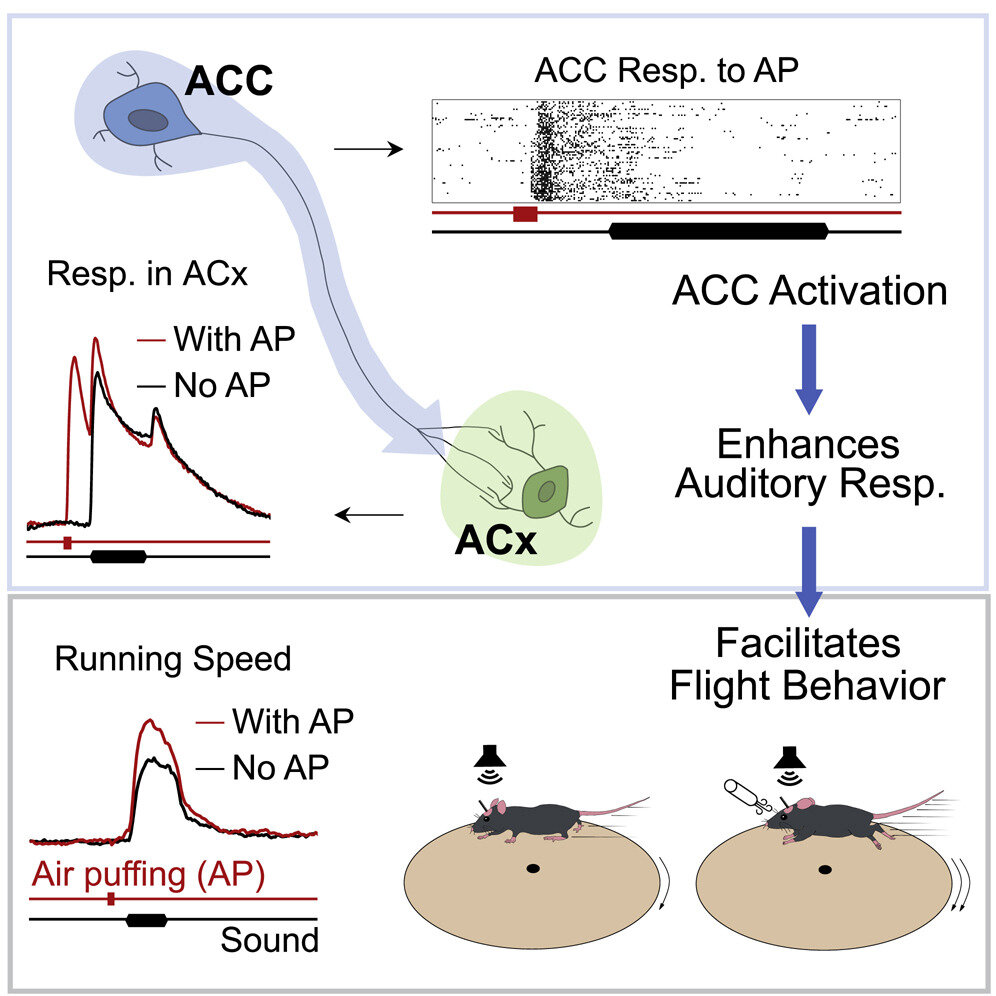 
Inborn defensive behaviors, such as flight, freeze and fight, are crucial for animals to survive in a dangerous environment. Neuroscientists from City University of Hong Kong (CityU) recently revealed the essential neurocircuitry that is fundamental for animals to perceive and integrate environmental cues to initiate defensive behavior. The findings suggest a new direction for further investigation in developing treatment for schizophrenia patients suffering from auditory hallucinations.

The research, led by Professor He Jufang, Wong Chun Hong Chair Professor of Translational Neuroscience, and Dr. Chen Xi, Research Assistant Professor in the Department of Neuroscience at CityU, showed how the anterior cingulate cortex (ACC) and auditory cortex (ACx) inside the brain work together to help the mice to increase their survival rate when danger is coming. The study was recently published in the scientific journal Cell Reports, under the title “The anterior cingulate cortex directly enhances auditory cortical responses in air-puffing-facilitated flight behavior.”

In the animal world, prominent environmental cues, such as airflow or air puffs, followed by unusual sounds, may signal an approaching danger, like an attack by a predator. To improve the reaction time in their defensive response, animals need to perceive and integrate these dangerous cues as fast as possible to increase their chance of survival by escaping more quickly. But how do animals do this?

Neural mechanism behind the flight behavior

“In the past decade, scientists have studied the defensive behavior and its underlying neurocircuitry in single sensory modalities. However, little was known about how a prominent cue influences innate defensive behavior, which is important for improving the survival rate when an animal faces imminent danger,” said Dr. Chen.

Previous studies have shown that a high-intensity sound can induce innate flight behavior. In this study, the team introduced air-puffing to the animal to mimic a prominent environmental cue before a high-intensity sound. Using anatomical, physiological, optogenetic, and chemogenetic methods, the research team studied how the anterior cingulate cortex, which is responsible for cognitive functions, and auditory cortex circuit controls flight behavior in mice.

In their experiments, researchers from CityU measured the running speed of mice in response to air puffs and noises at different air pressure and sound intensity. The change in pupil size and brain activity in the mice were recorded in detail using techniques such as fiber photometry and extracellular recording.

Experiments on the impact of air-puffing and sounds

Second, the team demonstrated that the anterior cingulate cortex encodes the air-puffing information and enhances the auditory response through its projection to the auditory cortex, thus facilitating flight behavior. They also proved that this neural circuit is essential for animals to integrate the air-puffing and sound cues. Inhibiting the anterior cingulate cortex or its projections to the auditory cortex neutralizes this facilitating effect.

Previous studies on top-down modulation to the auditory cortex focused mainly on how motor areas transmit motion-related information to it. But in this study, the research team showed that the prefrontal area of the brain, which plays a central role in cognitive control functions, such as influencing attention, predicting the consequences of the subject’s action, and anticipating events in the environment, can also enhance auditory cortical activity in mice.

The research team believes that anterior cingulate cortex-auditory cortex (ACC-ACx) neurocircuitry is essential for animals to integrate the air-puffing and sound cues. Activating this circuit may be critical for animals to survive in the natural environment. For example, airflow and unusual sounds together are more likely to help animals predict the appearance of predators than sounds alone, thus allowing the animals to escape more quickly.

The brain employs an alarm system to suppress intrusive thoughts

Citation:
Scientists reveal the neurocircuitry essential for animals to sense environmental cues of imminent danger (2022, May 5)
retrieved 5 May 2022
from https://phys.org/news/2022-05-scientists-reveal-neurocircuitry-essential-animals.html