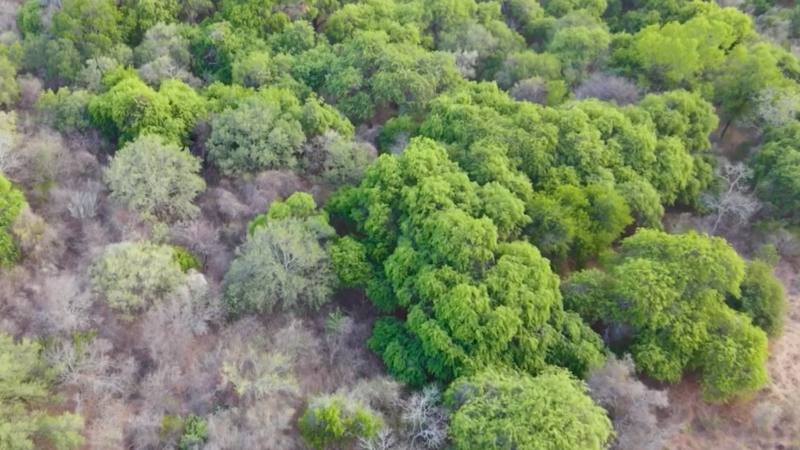 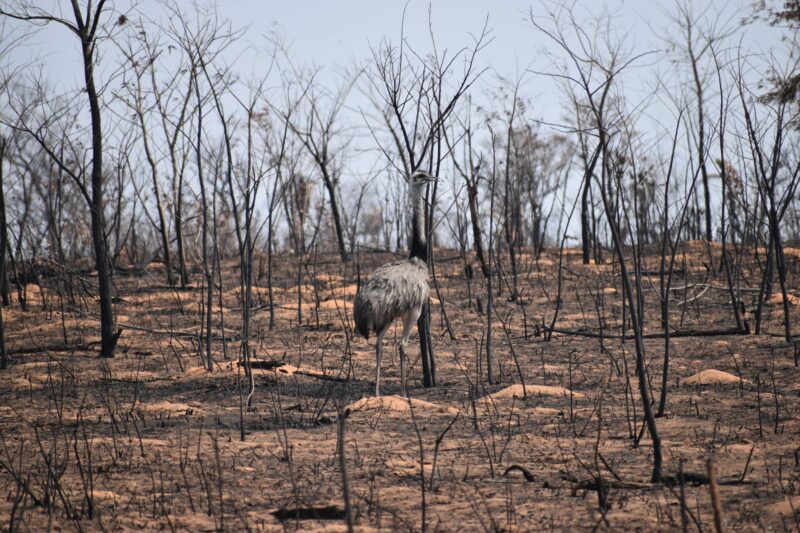 Droughts, wildfires, flooding, and deforestation are just some of the environmental pressures plaguing Bolivia’s Gran Chaco region. Yet, according to those affected by these realities on the ground, international media ignore these issues unless there are catastrophic consequences, such as the wildfires that have ravaged the region over the past several years. Local media, say people from affected areas, also miss important aspects of the story.

A key missing ingredient in media reporting is the perspective of local people, in particular those from Indigenous and other rural communities, and of women, who tend to bear the brunt of the effects of climate changes. Including local perspectives, or making space for local people to contribute their stories, allows the media to reframe existing narratives and promote a deeper understanding of the consequences of environmental damage and climate change and the steps needed to mitigate these effects.

Located in southeastern Bolivia, the Gran Chaco is part of a larger ecological area, or biome, spanning approximately 750,000 square kilometers across four countries. Sparsely populated and geographically distant from most major urban centers, most of what the public knows about the region is filtered through infrequent media coverage that focuses primarily on catastrophes such as the wildfires. Less well known is the region’s ecological importance and astounding biodiversity, which numbers approximately 3,400 plant species and hundreds of bird, mammal, reptile, and amphibian species. The continent’s second largest forest is threatened on a daily basis by human settlement and poorly planned cattle-raising and agro-industrial projects, and the effects of those activities on the lives of  local populations. A 2020 study by Global Change Biology Journal found that in order to adequately conserve this biodiversity, 23% of the biome should be protected, but currently only 5% holds that status.

The Gran Chaco and media representation

By examining a word cloud generated from a collection of Bolivian online media by the Media Cloud platform, one can discern patterns in the way the region is discussed. The word cloud below, for instance, generated by a search for the term “Gran Chaco” over 2021, highlights the Bolivian media’s focus on the petroleum and gas industries, road construction and other infrastructure development projects, as well as the topic of regional autonomy. This sample includes only one mention of a natural disaster: “derrumbes” (landslides).

As many news outlets and social media sites are not searchable in the platform, the visualization above does not provide an exhaustive picture of the way Bolivian media talk about the Gran Chaco, but it does offer a useful starting point for further discussion and reflection.

To gain further perspective on how the public and the media are discussing the issues of climate change and the environment in the Gran Chaco region, Rising Voices conducted interviews with 26 regional actors ranging from local journalists and Guaraní indigenous communicators to NGO staff, and local government officials. The insights gained from the interviews provided a critical local perspective on the problems faced by the region from a diversity of viewpoints, creating a much fuller picture of the issues and how people living and working in the region are dealing with them.

Among the opinions and ideas expressed by interviewees were narratives such as:

Even more telling were the opinions and ideas that interviewees expressed regarding the narratives that are missing or perceived to be missing in the media about climate change in the Bolivian Chaco. Some of these missing narratives include:

Independent media outlets such as Nómadas, La Región, and La Brava employ investigative methods to highlight structural problems that contribute to the degradation of the environment. Nómadas produced an important report about the construction of a clandestine bridge near a protected area that led to the deforestation of 3,000 hectares. Newsletters such as “El Chajá” from the organization Nativa are distributed by email and messaging apps.

A lone tree has stood like a frightened ghost in the center of the empty lot, where until a moment ago, hundreds of healthy trees were once there.

Radio Santa Cruz, based in the country’s largest city, also produces a podcast focusing on conservation issues and radio public service announcements available in the region’s Indigenous languages. Indigenous communities such as the Guaraní, Ayoreo, and Chiquitano, comprise 8% of the entire Gran Chaco multi-country region, and increasingly use community radio and social media to share their work. Two examples are the Radio station Ñande ñee and the podcast Paso a Paso con la Autonomía Charagua Iyambae are produced in the autonomous Indigenous community of Charagua Iyambae.

A mobile phone application from the Collaborative Communications Platform of the Environmental Defenders provides a space for exchanges of information, access to resources, and a way to provide alerts about environmental violations.

Individuals like Leonardo Tamburini, the executive director of the organization ORE, share links and commentary on matters affecting the region, such as the clandestine bridge cited above, which are in turn commented on, shared and amplified by friends and followers. This ORE-produced video shines a light on the effects of the wildfires on members of the Ayoreo Indigenous community, who have voluntary isolated themselves in the region.

It was not always possible to find information about the ownership of many of the media outlets, which would shed light on potential biases, conflicts of interest, or other motivations for sharing  or omitting opinions and ideas. As part of RV’s mapping of the region’s media sources, we found that generally, outlets funded or supported by NGOs or local governments proved to be more transparent, providing the audience a greater contextual understanding.

Opportunities to play a role in shaping narratives

There have been increasing efforts to engage historically excluded communities in the creation of media, many of which have focused on providing internet connectivity and training, and amplifying the communities’ work. Communities that produce their own media and play a greater role in civic life can play a major role in diversifying the coverage provided by their local media. 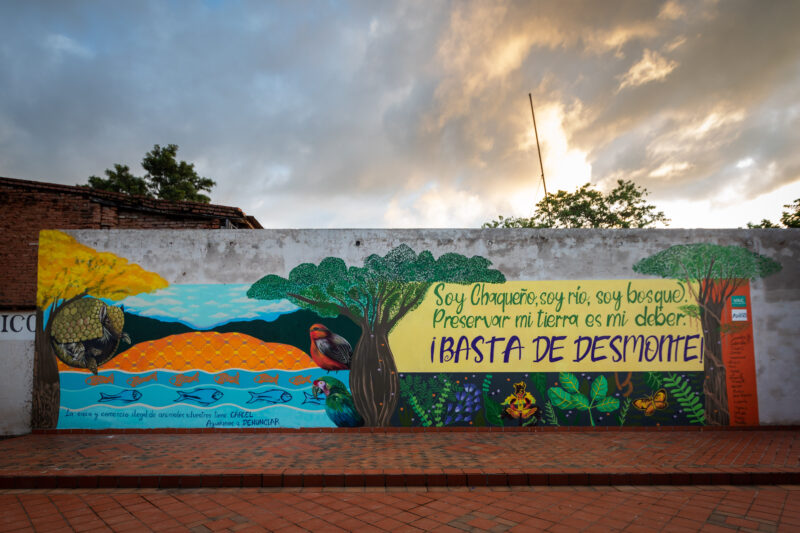 “I am from the Chaco, I am the river, I am the forest. Preserving the land is my duty. Stop the deforestation.” Mural in Villamontes, Bolivia. Photo by Knorke Leaf and used with permission.

Improving internet connectivity is one of the goals of the multi-country project Nanum: Mujeres Conectadas (Connected Women), which seeks to provide internet access to help rural women play an active role in finding solutions to the effects of climate change.

In Charagua Iyambae, the Indigenous Journalism School administered by the organization ORE and the Arakuaarenda Foundation is providing media training for Indigenous and Afro-Bolivian youth across the region. In an interview with Charagua Radio Santa Cruz, one of the School’s students, Briza Abapori, said:

In our communities there is a lot of information that needs to be disseminated; many community members do not know what is happening in the territory. Communication is also important in this stage of change towards Autonomy.

Also providing citizen journalism training is the media outlet Muy Waso in partnership with the Nativa Foundation and Mujeres Nanum. Other activities such participatory mural projects in the towns of Charagua, Villamontes, and Puerto Quijarro organized by artist Knorke Leaf also provides actions to introduce narratives in offline settings.

Such initiatives train more people to not only critically consume information but also actively challenge incorrect or incomplete ideas or information providing a more holistic picture of the serious effect climate change is having on these communities.

Fabiola Gutíerrez and Isapi Rua contributed to the research and analysis for this article.