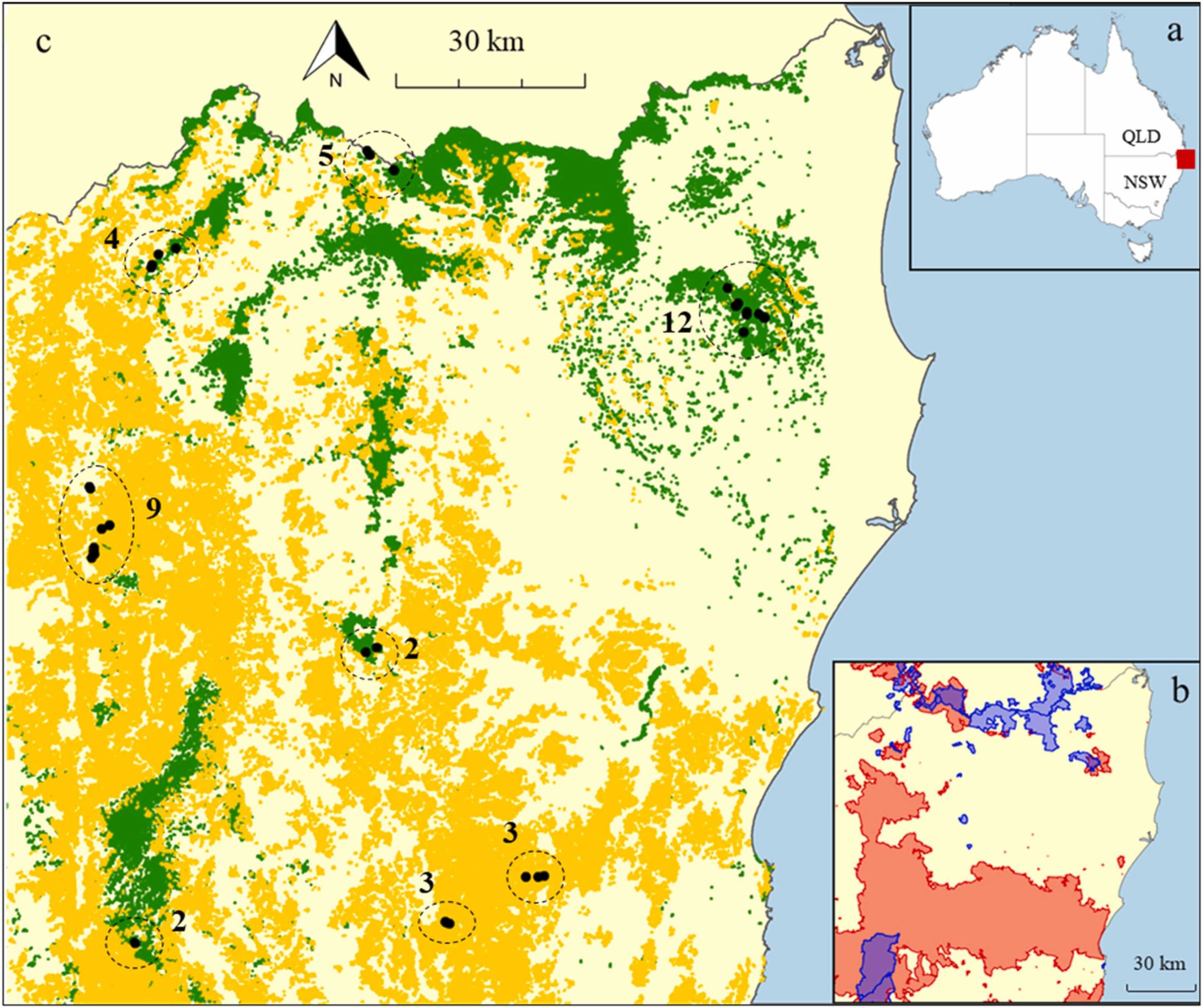 Functional bird populations vital to rainforest regeneration are struggling to recover in the years after the black summer bushfires devastated Australia, according to a study from the Center for Ecosystem Science at UNSW Sydney.

The study, published in Global Ecology and Conservation, investigated the impact of the 2019–2020 Australian bushfire season on the ancient Gondwanan Rainforests of Australia World Heritage Area, which were burned for the first time in recorded history.

The researchers found that unprecedented megafires negatively impacted the diversity of functional rainforest bird communities among burnt areas of the Gondwanan compared to surviving regions, as well as adjacent dry sclerophyll forests—woodland areas characterized by hard leafed and drought-adapted vegetation.

“It was important for us to compare areas that had been burnt to those that had not and also rainforests to dry sclerophyll forests, which are more adapted to burning,” says Professor Richard Kingsford, an author of the study.

“We found that the number of functional species, but also the relative abundances of species, was lower in burnt areas compared with unburnt areas across five national parks surveyed within the World Heritage Area,” says Josh Lee, the study’s lead author. “These results contrasted the less affected and more fire-adapted and adjacent dry sclerophyll forests, which increased in diversity.”

With their size, duration and intensity, the 2019–20 blazes were some of the worst in bushfire history. For the Gondwanan rainforest, it was especially devastating, wiping out an estimated 50 percent of the already scarce habitat.

“These rainforests are 40 million years old, and the fact we’ve burned up to half of it in just once fire season—which we can confidently attribute to climate change—is astounding. It’s another page in the story that is the huge impact we’re having on unique ecosystems worldwide,” Mr. Lee says.

The study found the most affected rainforest birds were species that eat insects, leaves or fruit. Of particular concern were fruit-eating birds such as the wompoo fruit-dove and paradise riflebird, that have significant roles in rainforest regeneration.

“We found there were fewer fruit-eating birds in the burnt rainforest than the unburnt areas, which is potentially a bad sign because it might mean that there’s less of that rainforest regeneration happening,” Mr. Lee says.

“These fruit eaters disperse rainforest seeds over large distances. Rainforests need these birds to eat and then disperse the seeds for them to grow in other parts of the rainforest. If we don’t have the pigeons and doves to help the fire-affected areas of the rainforest regenerate, we are in real trouble.”

Because of the impact on seed-dispersing birds, the recovery of the rainforest is likely to be extremely slow and highly dependent on the emigration of animals from outside burnt areas.

“The evolutionary lineage of these rainforests is that they’re typically wet, which means their species aren’t used to exposure to fire and just aren’t well adapted to recover in general,” Mr. Lee says.

The researchers say the findings indicate that no environment is safe from the direct and indirect impacts of climate change.

“We are particularly concerned about the ramifications of increasing drying with climate change and more intense bush fires on our really fire-sensitive forests and their animals,” says Associate Professor Will Cornwell, co-author of the study.

“Because of just how unique these ecosystems are and how rarely they burn, we really don’t know much about what the recovery will look like,” Mr. Lee says. “It remains to be seen what the impacts will be in years to come or whether the rainforest and the birds will come back at all.”

The researchers say it is essential to continue to work on understanding the effects of large fires on our biodiversity for long-term management plans and conservation efforts of these highly valued ecosystems.

“It’s going to be really important to get a timeline for succession that looks not just at birds, but what other flora and fauna are coming back in the areas that burn really badly, and also figure out which areas are most prone and most vulnerable to future fires,” Mr. Lee says.

“The intensive efforts to save the Wollemi Pine showed that we can marshal fire-fighting resources to protect our biodiversity assets,” says Mr. Lee. “We might get to the point where we see a similar active approach to protect the rare and ancient ecosystems sensitive to fire, but it is costly and risky.”

With bushfires predicted to become more severe and more frequent as climate change continues, the need for intervention is urgent.

“They are such unique ecosystems, so there are a lot of species that exist there found nowhere else in the world,” Me Lee says. “There’s a high level of endemism. So, if we did lose enough of these rainforest areas, whole groups of species—not just birds—would be threatened with extinction.”

The researchers say that we need to recognize the real cost of bushfires on biodiversity.

“Inaction on climate change will come at the expense of our rainforests. Because the recovery of the rainforest is slow, the recurrence of fire is probably going to be too frequent that rainforest won’t be able to recover and [we] will just lose more and more of it through time,” Mr. Lee says.

“Hotter temperatures and more extreme droughts will continue to have devastating impacts on our biodiversity, particularly our rainforests,” Prof. Kingsford says. “We have to reduce our emissions and get climate change under control.”

CSIRO identifies plants most at risk after Black Summer megafires