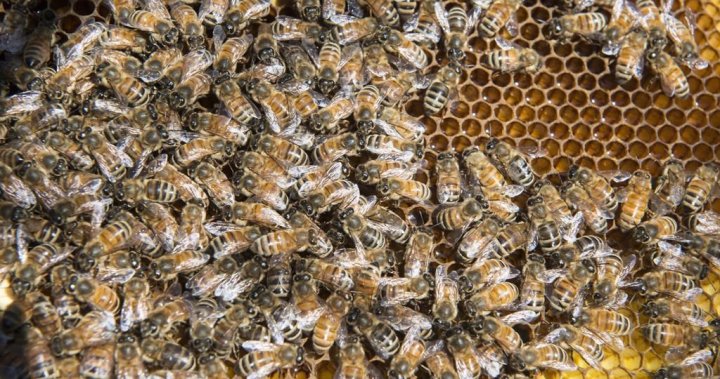 
Quebec beekeepers are calling on the federal and provincial governments for emergency aid as bee populations see a mortality three times higher than the average.

Members of the Beekeepers and Beekeepers of Quebec (AADQ) recorded, on average, a mortality rate of 60 per cent in their hives, the association revealed at a press conference on Wednesday.

Over the past five years, this rate has hovered around 21 per cent in the province.

The long summer in 2021 has created the right conditions for the spread of a parasite that attacks bees, the varroa mite.

The president of the AADQ, Raphaël Vacher, described the situation as “historic” and “critical.”

The weather conditions were ideal for varroa, allowing the parasite to multiply.

“It picked up in the fall with rates two to four times higher in our hives,” Vacher said. “This is a concrete example of the impact of climate change on beekeeping production.”

There are treatments against varroa mites, but the variety of treatments available leaves something to be desired, the beekeeper said.

He said more research is needed, as the loss of bee populations poses a serious disadvantage to local crops.

He added that there are two treatments in Europe that are not available in Canada.

“These products [those used in Quebec] have been there for a very long time. There may be resistance phenomena that will appear, which will cause the products to perform less well,” Vacher said.

The significant mortality of bees occurs in the midst of soaring food inflation.

Bees are not only used to produce honey. The insects pollinate other crops. The impact is particularly great for blueberry growers who will miss “between 15,000 and 20,000 hives” for pollination this season.

“We have to expect that there will be fewer blueberries produced, fewer cranberries, fewer apples,” Vacher said.

“There are a lot of impacts that will be felt on Quebecers’ plates,” he added.

Vacher and the association is calling for a joint federal and provincial emergency aid package of $12 million to help beekeepers, most of whom have lost more than half of their bees.

“Imagine the disastrous consequences on its liquidity. The company loses its income, but it has the same expenses. If there is no intervention from the state, it is certain that we risk losing these businesses,” Vacher said.

Government support would allow companies to restock their hives in order to hope for a “more normal” season in 2023.

The federal Minister of Agriculture, Marie-Claude Bibeau, said the increase in the bees’ death rate is “worrying.”

“Our government continues to invest in research and projects are currently underway with respect to bees,” she said in an email.

“We continue to work with the provinces and the industry to help producers … get through this difficult period.”

The general president of the Union of Agricultural Producers, Martin Caron, said government programs are not appropriate for the exceptional situation that beekeepers are experiencing.

He believes that the crop insurance programs of the Financière Agricole du Québec will not solve the problem.

“It will not be able to meet the crying need of bees and beekeepers,” Caron said.

The Quebec Minister of Agriculture, André Lamontagne, said in an email that he was “very concerned” by the situation.

He left the door open for additional help through existing programs.

“I continue to follow the situation closely. The investigation into hive mortality is continuing and we will act on the findings that result,” Lamontagne said.

Delta-8 THC is one of the most talked-about...
Read more
Previous articleAfter 50 years of US-Canada joint efforts, some success and lots of unfinished business
Next articleThiaw, Côte d’Ivoire to present key outcomes of COP15