put water at the heart of solutions 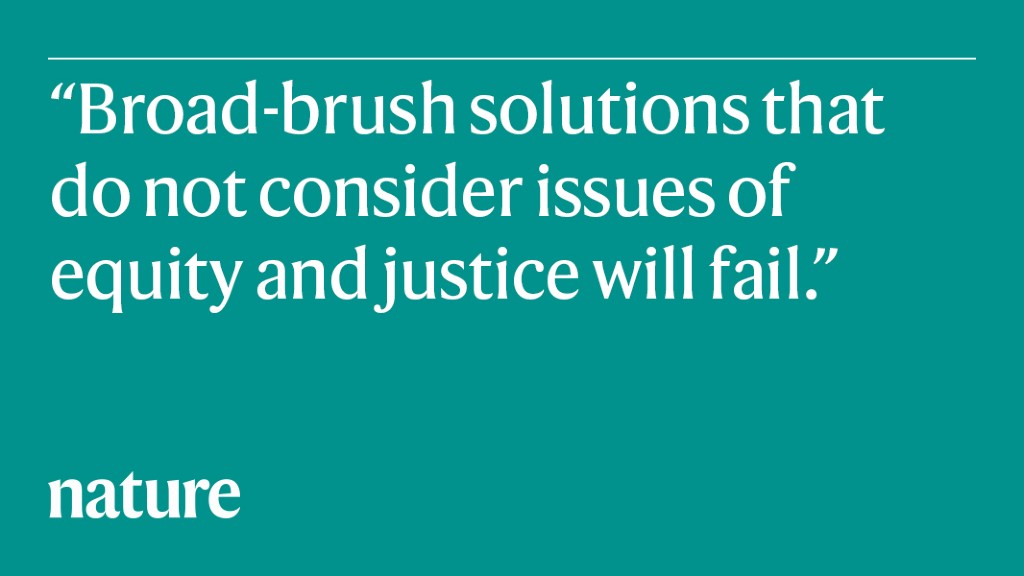 
I was born in a village near the Sundarbans mangrove forests in West Bengal, India. Many of my childhood memories are of overheard conversations — worried adults discussing how the rains failed or how brackish water crept in to ruin the rice crop. Farmers in developing countries have always faced a disproportionate share of climate-change impacts. Eventually, most of my family moved away from agriculture into city jobs, but now I work with farmers all over the world to understand how they try to manage water in the face of climate change.

Ways to reduce carbon emissions and to adapt in a warmer world are finally starting to draw global attention, but too often they skate over broader issues: injustice, inequity and the urgent need to tailor action to the right place. All of these intersect with water.

I co-wrote the chapter on water in this year’s report from the Intergovernmental Panel on Climate Change (IPCC) on harms caused by global warming and how to adapt (see go.nature.com/3vpejjb). My team consolidated evidence of changes in every component of the water cycle: mean and extreme precipitation, floods, droughts, soil moisture, glaciers and groundwater. Communities’ responses often cannot reduce climate risks sufficiently and sometimes introduce new ones.

To limit warming to 1.5 °C above pre-industrial levels requires carbon emissions to plummet immediately, but too many carbon-removal efforts overlook demands on water. For example, inappropriate species used in tree-planting programmes to pull carbon from the air can consume scarce water and even change local rainfall patterns. Similarly, replacing fossil fuels with biofuels might require crops such as maize (corn) and rapeseed, which take water that could otherwise go to food production. In the wake of such mitigation programmes, vulnerable communities can face food and water insecurity, which can make implementing other adaptations harder by increasing resistance and vulnerability and by eroding trust.

Water has been called the most crucial link in climate adaptation, and also the most ignored. About 60% of climate-change adaptations — such as irrigation and harvesting rain — address water-related hazards. Droughts, floods and rainfall variability have already reduced the rate of growth in crop and livestock yields. Changes to climate can be too fast and large for adaptations to work.

In climate-change hotspots, including the Sundarbans, there is only so much that farmers can do. Many farmers in the Sundarbans planted salt-tolerant rice varieties and grew shrimp in brackish water. Now cyclone damage and saltier water are making those changes increasingly ineffective. Unable to cope, many families are migrating out, often in precarious circumstances. Cases of human trafficking rise after every climate hazard, such as cyclones and floods.

The impacts of climate change hit the poor in developing countries hardest: they are both more likely to live in hazardous places and less able to protect themselves. The Sundarbans region exemplifies this. Here, hazards compound: sea levels rise, salt water intrudes into homes and cropland, cyclones are more intense. Rural livelihoods are even more precarious than they were for my family in the 1970s. Mangroves, so effective in coastal areas for buffering cyclone damage, die when it gets too hot.

And those who bear the brunt of climate impacts are the least responsible for them. The carbon footprint of a typical resident of the Sundarbans is minuscule. (In 2020, the average US resident was responsible for 13.7 tonnes of carbon emissions a year, the average Indian 1.7 tonnes, a Sundarbans resident less than that.) Many villages still do not have electricity or basic services. My ancestral village, for instance, got grid electricity only in the early 2000s. The people of the Sundarbans have always led a precarious existence: colonial exploitation and neo-liberal policies have systematically neglected the welfare of such marginal areas. Their plight underlines that climate change is an issue of justice, equity and inclusion.

Including voices that highlight these issues helps to create more feasible mitigation and adaptation efforts. Broad-brush solutions that do not consider issues of equity and justice in climate change will fail; to work, solutions must be specific to their contexts. In the IPCC’s latest assessment cycle, the number of participating scientists from the global south, like me, increased markedly. We brought our technical expertise and our lived experiences to the table and learnt from each other.

And more adaptations are being led by locals. For example, Bangladesh and some coastal states in India have installed cyclone early-warning systems and strong local-government mechanisms to notify residents, which have saved hundreds of thousands of lives. These locally led efforts need global support. Huge challenges remain in rehabilitating buildings and property after disasters.

Over the next decades, all kinds of approaches to mitigation and adaptation will be needed: more salt- and drought-tolerant crops, better flood and drought information, planned relocation, and support for those who migrate. Remedies must reduce emissions and remove carbon, create plans and policies for migration, and improve emergency services for responding to extreme weather, such as the heatwave in the Indian subcontinent right now. To achieve all this, all voices, especially those most affected by climate change, must be heard.

The author declares no competing interests.

Delta-8 THC is one of the most talked-about...
Read more
Previous articleCopenhagen’s unusually high benches are raising the alarm on climate change
Next article6 months after the climate summit, where to find progress on climate change in a more dangerous and divided world