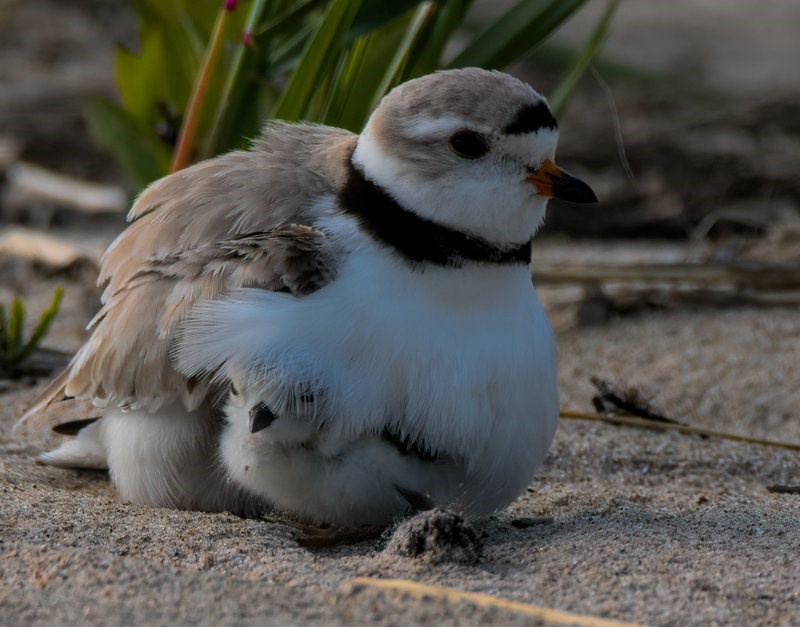 ‘We’re very happy to have our visitors, and also very happy to make sure that we keep them safe … and stabilize the population of the piping plover,’ said official

Straight from Birds Canada, Tiny council heard that the bird is the word.

Nesting on the shores of Woodland Beach for their fourth straight year, a pair of piping plovers have made their impact and mobilized conservation efforts to help produce a healthy clutch and increase their population.

Piping plovers (Charadrius melodus circumcinctus) are a small shorebird, have an orange stubby bill with black tip, bright orange legs, and are mostly the colour of dry sand except for a black band on their breast and above their forehead for the adults.

They were designated as endangered in 2001, and have been federally protected under the Species at Risk Act since 2003, and provincially since 2008 under the Endangered Species Act; the migratory birds are protected anywhere they nest in Canada.

“The current pair that you have laid their first egg Friday of last week (May 13),” Gress explained. “They lay one egg every other day until they’ve got a clutch of four eggs, so they should have a full clutch by the end of this week. And then they’ll be incubating those eggs for around 27 days; so we can expect a hatch in about a month.

“These birds are territorial, so the male that you have nesting there this year is the same male that has been nesting in Tiny Township since 2019. He likes your beach. That’s pretty cool,” she added.

According to Gress, hatchlings are vulnerable due to their size (similar to a golf ball) and their inability to fly for their first month.

Tips for helping to keep the piping plover safe include: walking on wet sand at the water’s edge when near posted breeding areas; keeping pets leashed; removing waste from beaches which would attract predators; leaving beach debris such as driftwood, shells and seaweed undisturbed and non-operation of vehicles on beaches or dunes.

“They are an umbrella species,” Gress shared, “so when you’ve got a piping plover pair nesting at your beach, it’s an indication that you’ve got a healthy ecosystem; so things like the dunes and the vegetation on the dunes provide flood prevention, erosion control… all kinds of good things. And of course that means you’re attracting quality wildlife to the area as well.”

Gress told Tiny council that within the Great Lakes, including predominant nesting site Michigan, 74 pairs were part of the population last year. However, across Ontario only four pairs nested last year. As of this year, only three pairs have been identified in the province, to which Gress emphasized their importance at Woodland Beach.

“We have no enforcement capabilities, so the work we do is covered under federal permits but we’re not able to enforce anything. The federal permits come from Environment and Climate Change Canada, which allows us to approach the nests, install the fencing, and do everything that we do,” stated Gress.

“This is an endangered species that we take very seriously here in Tiny Township, as we’re very environmentally focused,” said Leitch. “And we’re very happy to have our visitors, and also very happy to make sure that we keep them safe as we continue with the efforts to try and stabilize the population of the piping plover.”

Read more
Previous articleThe world has wronged its oceans, but 2022 can be the year for redemption, says UN
Next articleNY Cannabis Control Board approves another 58 marijuana cultivators