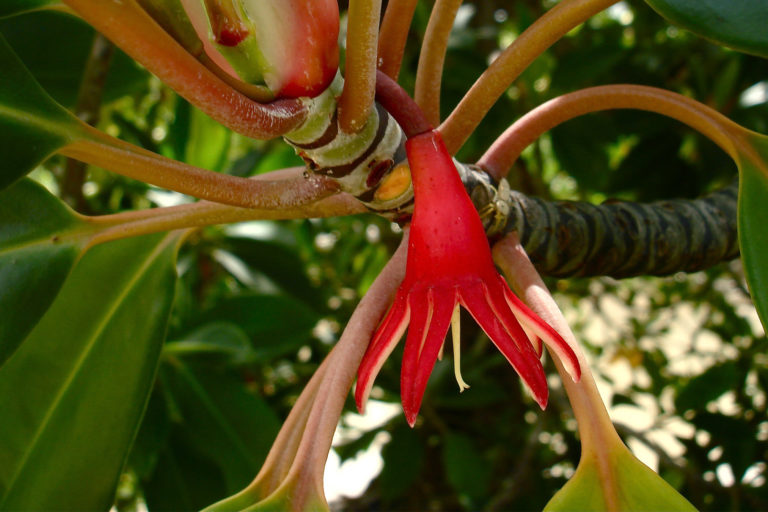 
Tanzania’s Rufiji Delta is arguably the mangrove capital of East Africa, home to around 55,000 hectares (135,900 acres) of mangrove forest. In the face of the climate crisis, mangroves like this play an important role sequestering large amounts of carbon dioxide from the atmosphere.

For most of the roughly 49,000 people living in remote communities in the Rufiji Delta, these coastal wetlands mean livelihood. They depend on them for rice farming and fishing, as well as for firewood and timber.

However an estimated 30-50% of the world’s mangroves have been lost in the past 50 years, contributing massively to global carbon emissions.

Since the 1990s, the Tanzanian government has been working to replant the Rufiji Delta’s mangroves. But efforts to restore degraded mangroves in the northern delta block are being undermined by unsustainable rice farming, new research has shown.

One major issue is that mangrove seedlings, which are often planted in fields where farmers are actively growing rice, are continually disturbed. “This is intentional, as farmers understand that by allowing all seedlings to grow means they will lose their farm field in the future,” says Elinasi Monga, lead researcher of the study published in Global Ecology and Conservation journal.

Monga, from the Tanzania office of the IUCN, the global conservation authority, tells Mongabay that the restoration also involves planting of only one mangrove species, the large-leafed orange mangrove (Bruguiera gymnorrhiza), an approach that is not likely to sufficiently restore ecosystem functionality.

Monga’s team established sampling plots in good, degraded and restored mangrove areas, and found that the survival of planted mangroves decreased with age. While 45% of trees were found to survive two years after planting (4,533 trees per hectare, or 1,835 trees/acre), the rate dropped to 28% (2,766 trees/hectare or 1,120 trees/acre) for 15-year-old trees — a trend that could indicate older trees are being cut down. The overall average survival rate stood at 37% (3,691 trees/hectare or 1,494 trees/acre).

This, Monga says, can be considered “moderate performance,” with studies in other countries reporting survival rates as low as 28% (Kenya) or 30% (Vietnam), or as high as 88% (Kenya). The survival rate in the Rufiji Delta would have been much higher if the threat of unsustainable rice farming had been addressed before planting was started, Monga says.

The researchers also found out that although planting activities in the Rufiji Delta have been going on for more than three decades, there were no systematic policies in place until 2020, when Tanzania joined with nine other African states to develop and publish “Guidelines on Mangrove Ecosystem Restoration for the Western Indian Ocean Region.”

“Currently, important criteria for successful restoration such as site and seedlings selections are not well analyzed before planting activities,” the researchers noted in the paper. “Open and easily accessible areas are mostly selected for restoration activities without any further assessment of soil and hydrological characteristics of the selected sites. Similar to site selection, there are also no seedlings quality control measures.” They added that consideration and control of the quality of seedlings is as important as other factors in determining the survival rate and the quality of the forest stands.

Despite the flaws with the replanting program, the study found that restored mangroves were regenerating faster than areas left to regrow on their own. Rice fields that were abandoned five years earlier supported an average of just 98 trees/hectare (40/acre), while those abandoned 10-15 years earlier had 334 trees/hectare (135/acre).

Moreover, the rate of 2,766 trees/hectare (1,120 trees/acre)  in plots replanted 15 years earlier was significantly higher than the 417 trees/hectare (169/acre) in 20-year-old undisturbed mangroves.

Their analysis indicates that the cutting of mangroves for rice-farming activities has compromised the potential of mangroves to absorb carbon dioxide from the atmosphere.

It was estimated that about 180 metric tons of carbon per hectare (73 metric tons per acre) was lost during the period under study. “A large amount of carbon was thought to be emitted back to the atmosphere, because removed mangroves are always burnt,” Monga says. “This means that unsustainable rice farming in Rufiji Delta jeopardizes global efforts of fighting against climate change.”

In the study, the researchers only considered whether planted mangroves compensate for the loss of biomass carbon stock, and did not analyze carbon stored in soil, due to lack of data. Jared Bosire, program manager for the U.N. Environment Programme’s Nairobi Convention, an international platform focused on the protection of the Western Indian Ocean, noted that this omission could skew results, since sedimentary carbon can be quite significant in mangroves.

Emmanuel Japhet, a mangrove specialist working with Wetlands International Eastern Africa, also noted that the researchers didn’t track the number of rotted stumps or uprooted seedlings in the study areas. However, Japhet said the study was well-designed overall, and that it highlights the importance of post-planting monitoring in mangrove restoration projects.

The research was carried out in a bid to promote improved management of mangrove in Tanzania and especially in the Rufiji Delta, Monga says. “This area harbors over 30% of mangroves of Tanzania and therefore it is a critical mangrove area in Tanzania. The area also is an important wetland in the country that support fisheries activities. About 90% of country’s wild catch shrimps are from Rufiji Delta,” he says.

Monga adds the study shows how human activities at local levels can have significant negative impact on the global mission of addressing climate change, highlighting the importance of action at the ground level. “More support is needed for local communities to contribute positively to the global plans,” he says.

For the case of the Rufiji Delta, communities need to be empowered to farm responsibly, Monga says. Since the farmers operate in the Rufiji Delta because the soil is fertile and moist throughout the year, he argues that if irrigation systems and other farming inputs are provided on alternative land, it’s likely that farmers will be willing to move out of the delta.

“This will have a number of positive impacts,” Monga says, “including to the environment and food security to local community members.”