Policy Watch: Why we need a joined-up approach to tackling biodiversity loss, desertification and climate change 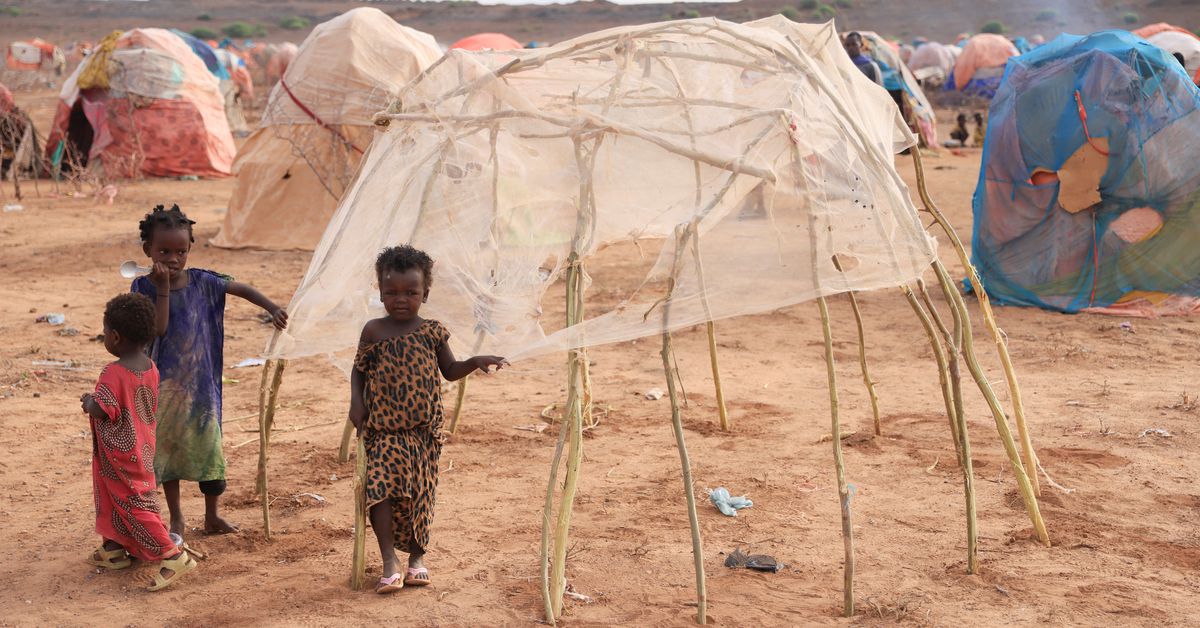 
Children stand next to a makeshift shelter at the Higlo camp for people displaced by drought, in the town of Gode, Somali Region, Ethiopia, April 27, 2022. Picture taken April 27, 2022. REUTERS/Tiksa Negeri – RC2HVT9W2U7Q

May 16 – We need tree-planting, we need renewables, and we need fossil-free fuels. But in our efforts to tackle the climate emergency, are we forgetting the soil beneath our feet?

Many organisations are warning that the overlapping crises of climate, biodiversity and land degradation must be tackled together – not sequentially – if planet Earth is to continue to support us.

Underlining that, parties to the Convention meeting in Cote d’Ivoire from May 9-20 for the first of the year’s three big UN summits, heard French President Emmanuel Macron in a video message call for all public policies to incorporate the three interlinked conventions on biodiversity, climate change, and desertification, that grew out of the 1992 Earth Summit in Rio de Janeiro.

UNCCD itself suggests countries could work on all three together rather than individually to achieve economies of scale and engage business and civil society to mutual advantage. Land restoration also connects all the Sustainable Development Goals, the 17 objectives adopted by all UN member states in 2015 with the aim of ending poverty, protecting the planet and improving lives by 2030.

Delegates in Abidjan are being asked to increase investment in land restoration and to tackle the growing impact of drought. Droughts not only affect food production; they also cause the release of carbon dioxide into the atmosphere, thus fuelling climate change. A warming planet is itself doubling the risk of drought in vulnerable countries, and even in Europe the effects of drought are having a financial impact.

Ibrahim Thiaw, executive secretary of the UNCCD, called on countries to make “transformational, not incremental” decisions. “Proactive national drought policies and a joined-up approach to managing natural resources” are needed, alongside new technologies (such as satellites) to deliver early warning and precision for informed decisions.

Over a quarter of all land is degraded, and billions of tonnes of soil are lost each year because of unsustainable agriculture practices.

Countries have committed to restore over 1 billion hectares of degraded land by 2030, but decisions must be made about where restoration will have greatest impact. Brazilian scientists looked at almost 3 billion hectares of land globally that had been converted to farmland and found that 55% could be restored while maintaining current food production, assuming realistic yield increases.

This could be achieved by focusing restoration efforts in priority areas (eg wetlands or arid ecosystems) instead of constraining it to a fixed proportion of national areas, and optimising for both biodiversity and climate mitigation rather than treating each separately. Another argument perhaps for taking targets out of siloes?

Sub-Saharan Africa has committed to restore over 400 million hectares. There, one of the world’s most ambitious projects, the Great Green Wall, aims to stop the southern expansion of the Sahara Desert. The ambition for 2030 is to restore 100 million hectares of degraded land, which will absorb some 250 million tonnes of carbon dioxide and transform millions of lives in the process.

But – depending on how it’s measured – just 4%-20% of that target has been reached over the past 15 years, and there are concerns not all its projects are reaching the most needy. Another $33 billion in funding is required to complete the wall. Last year, President Macron announced an accelerator fund to give fresh impetus to the project, while 16 billion euros has been pledged in international finance, although wrangling continues as to how it will be managed. The UNCCD will review progress on how much of that commitment has materialised.

Finance is an issue that also dogs another planetary pillar: biodiversity. A new round of negotiations gets under way in June, after failure to make progress at talks in March. NGOs want to see a serious push for collective action and ambition ahead of the 15th session of the Convention on Global Biodiversity (COP15) in Kunming, China, in August. While there seems to be broad support from nations to protect or conserve 30% of land and ocean by 2030 (the so-called 30 x 30 plan), details of how and where are lacking. A previous global commitment to halt species loss by 2020, which was not met, may be pushed out to at least 2030.

It’s estimated that $700 billion is needed to address the global biodiversity financing gap.

“Much of that (funding gap for biodiversity) can be closed by … repurposing, reforming or eliminating subsidies for activities that harm nature, whether that be industrial agriculture, fishing or fossil fuel subsidies,” says Brian O’Donnell, director of the Campaign for Nature. Various estimates suggest the most harmful subsidies amount to some $500 billion – leaving $200 billion to be found.

That’s twice the amount pledged to developing countries for climate adaptation, and even that sum has not fully been delivered. Negotiators expect some money will come from redirecting domestic resources, but finance will have to come from the private sector. However, O’Donnell has no illusions that companies will voluntarily sacrifice profit maximisation for nature. Regulation will be required.

“The most important thing is to get the destruction of nature that we’re seeing priced in to the cost of doing business”. At the moment, he adds, “it’s basically happening for free, and companies are making quite a bit of profit [from] it”.

That requires an all-of-government approach, especially getting finance ministries involved in discussions, he says.

Finance must also reach the local communities charged with reviving soil and protecting biodiversity. O’Donnell observes that while the rhetoric is shifting on indigenous land rights, the flow of finance needed to secure those rights isn’t yet there. “Land rights are fundamental to both an ambitious biodiversity framework as well as a climate one.”

Negotiators in Cote d’Ivoire are hearing the same message.

Opinions expressed are those of the author. They do not reflect the views of Reuters News, which, under the Trust Principles, is committed to integrity, independence, and freedom from bias. Sustainable Business Review, a part of Reuters Professional, is owned by Thomson Reuters and operates independently of Reuters News.

Angeli Mehta is a science writer with a particular interest in the environment and sustainability. Previously, she produced programmes for BBC Current Affairs and has a research PHD. @AngeliMehta

Oceans Help Us Fight Climate Change, Now We...
Read more
Previous article‘Is it all worth it?’: farmers left heartbroken as Queensland floods ruin crops | Queensland
Next articleRecord number of dams removed from Europe’s rivers in 2021 | Rivers