Novel species of pathogenic bacteria of onion identified in Texas 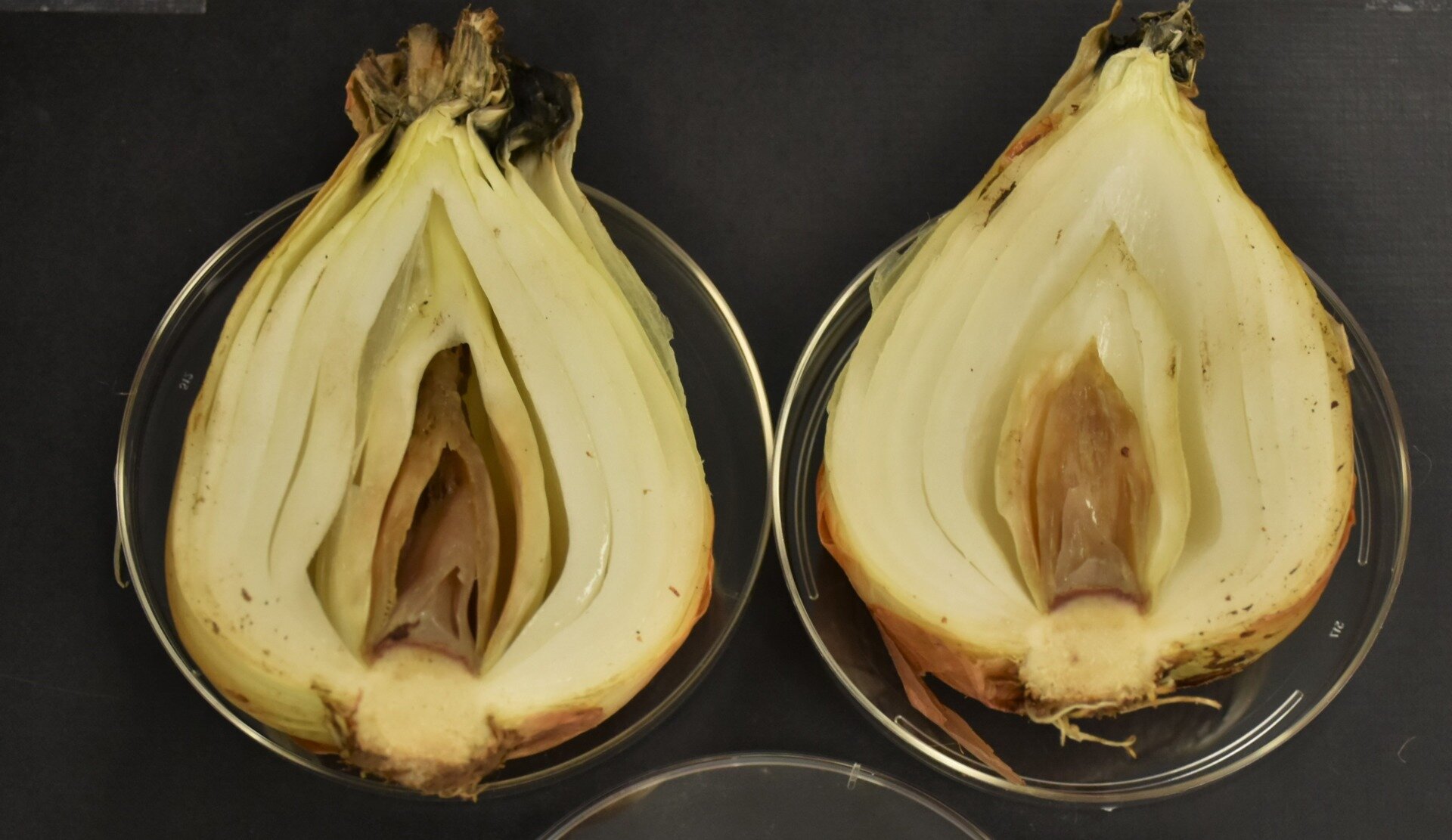 
While conducting the survey of bacteria in onions, a team of Texas A&M AgriLife researchers in Uvalde identified a new pathogen—a bacterial species now named for where it was found.

The work is a collaboration among scientists from the Texas A&M AgriLife Research and Extension Center at Uvalde, the University of Florida and the University of Pretoria, South Africa. Findings are published in the International Journal of Systematic and Evolutionary Microbiology.

Onion production is a big commodity in Texas, which ranks sixth in U.S. onion production, so a new disease is a cause for concern and preparation. Data from the U.S. Department of Agriculture shows that in 2021 approximately 15,950 tons of onions were grown on 11,500 acres in the state, generating about $94.3 million in industry revenue and about $206.5 million in overall revenue for the state.

Unfortunately, Malla said, until recently there has not been very much research done on onion diseases in Texas, “but we are making progress.”

Cochran said the statewide, national and international prevalence and geographic distribution is unknown. Thus, the full impact of this newly documented pathogen, which has been named Pseudomonas uvaldensis sp. nov., is yet to be determined.

“Texas onion pathology is an area that needs more study, particularly in the case of bacterial pathogens,” she said. “But with this work, the first step has been taken to better understand the full impact of this species.”

Cochran also noted the identification of this new species can provide insight to the plant disease challenges and the microbiome of not only onions, but potentially other vegetable crops, particularly those related to onion, such as garlic, leeks, scallions and chives.

For the last three years, Malla’s lab at the Uvalde center has been conducting a bacterial survey on onions in Texas’ Rio Grande Valley and Winter Garden regions.

Malla is a collaborator on a four-year Specialty Crop Research Initiative project funded by the USDA National Institute of Food and Agriculture. The project, named “Stop the Rot: Combating onion bacterial diseases with pathogenomic tools and enhanced management strategies,” is led by Lindsey du Toit, Ph.D., Washington State University. It is a collaborative project involving researchers from 12 U.S. states and South Africa.

It was as part of this project that a member of Malla’s team, Manzeal Khanal, a research associate with AgriLife Research, along with Texas A&M graduate student Bed Prakash Bhatta, isolated and identified this pathogenic novel species from a diseased onion bulb.

“The bacterium was found in the bulb of a rotting onion that was grown in the Texas Winter Garden region and was discovered when we were doing a survey for the project,” Malla said. “We brought the collected bulb samples to the center for the isolation of bacteria and further analysis.”

Khanal performed a preliminary identification of the bacterium using the Sanger sequencing on 16S rRNA gene. The results showed similarities to common pathogens in other crops.

“The 16S rRNA gene sequence of the strain was similar to Pseudomonas mediterranea and Pseudomonas corrugata, but these species are common pathogens of tomato and pepper and not known to cause disease in onion,” Khanal said.

When he realized he may be looking at a new pathogen of onion, Khanal performed a whole-genome sequencing for accurate identification of the strain. After analyzing the complete genome of the unique strain, he realized the genome did not meet the criteria assigned to any known species of Pseudomonas. In addition to whole-genome sequencing, biochemical and physiological features of the strain were also examined as a part of the phenotypic fingerprinting effort.

“Using this polyphasic approach to taxonomy, the strain was confirmed as a novel species,” Malla said. “We named the species Pseudomonas uvaldensis sp. nov., as a tribute to the city of Uvalde, where the Texas A&M AgriLife center has been conducting research and extension outreach for half a century.”

Malla said a number of bacterial genera are generally present in onion crops. Some bacteria can cause disease, and their occurrence and pathogenicity vary across onion production regions. In Texas, the team found 16.1% of surveyed bacteria in 2020 were pathogenic. These genera include Pantoea, Erwinia, Pseudomonas, Burkholderia and Xanthomonas.

“Preliminary results from our project indicate that disease control measures such as crop rotation, insect-pest management, and the use of surface, subsurface or drip irrigation instead of overhead sprinkler irrigation, would be effective in their control,” he said. “So would the proper curing of harvested bulbs and storage in cool, dry conditions, as this would help manage onion rotting caused by bacterial pathogens.”

Disease control measures that involve preventing bacteria from entering plants and from spreading in a field are useful for both commercial and homeowner production, Cochran added.

“Prevention and treatment at the onset are far more effective management strategies than attempting to control an advanced epidemic,” she said. “Control of insects and their larvae during the growing season can assist in reducing entry points for bacteria and the spread of bacteria as well.”

Malla noted one objective for the project team is to develop better management practices for controlling bacterial diseases in onions.

“One of the first and most important steps in doing this—identifying a new bacterial pathogen—has been taken by this team,” he said.

Citation:
Novel species of pathogenic bacteria of onion identified in Texas (2022, May 10)
retrieved 12 May 2022
from https://phys.org/news/2022-05-species-pathogenic-bacteria-onion-texas.html