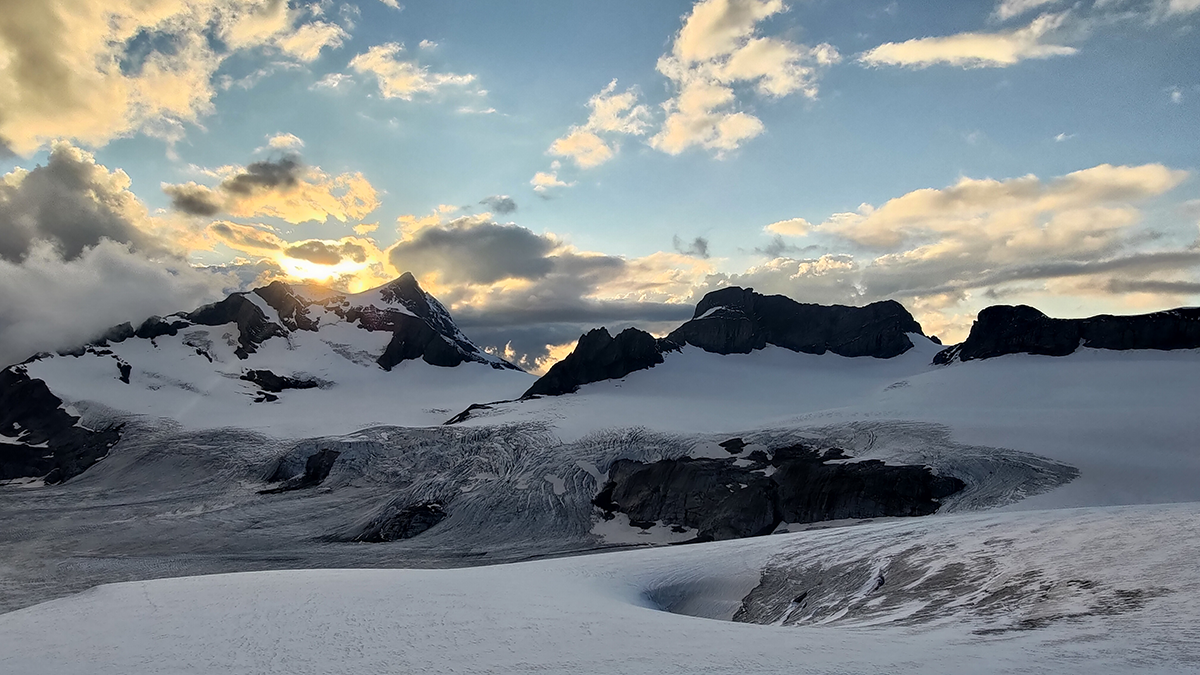 
Editors’ Vox is a blog from AGU’s Publications Department.

Mountain regions cover approximately a quarter of the Earth’s land surface, although the exact percentage depends on criteria used to define them. The rain and snow that fall in mountains eventually move downstream and provide water for millions of people. China and India, the two most populous countries in the world, depend on water supply from the Himalaya and Tibetan Plateau, and in arid regions, such as the western USA, the mountain ranges are islands of critical water supply. There is increasing evidence that the effects of global warming and climate change are often enhanced in high mountains so the need to understand why has become critical.

What is “elevation-dependent warming”?

Elevation-dependent warming (EDW) is the phenomenon whereby the rates of warming depend on elevation (or height above sea-level). This means that areas high up may be warming faster or slower than areas immediately above or below. When moving up a mountain, you may notice that the vegetation and landscape tend to change with height – you may start with farmland and areas where people live, then forests thinning to alpine meadows, and finally snow and ice.

Because these different zones can respond to warming at different rates, this can be a cause of EDW. For example, melting snow and ice can enhance warming through the reduction of reflectivity when highly reflective snow is replaced by the darker ground underneath. However, this only takes place where there is snow in the first place, which might be only above a certain elevation. This in turn depends on whether the mountain in question is near the poles or in the tropics, or somewhere in between.  Of course, temperature is not the only measure of climate and recently the concept has been expanded to include other variables, such as precipitation. This concept is called “elevation-dependent climate change” (EDCC).

What have been the main changes in mountain climates over the past century?

Although there is much variation over time and space, on average, mountains have been warming around 25 to 50 percent faster than the global mean since around 1950 (when extensive record keeping began). This is a similar phenomenon to Arctic amplification but at a slightly lower level.

There is also increasing evidence that mountain precipitation (which is caused specifically by rising air up mountain slopes) is not as enhanced as it was in the past. Even though in a warmer world the hydrological cycle is predicted to speed up, leading to increased evaporation and episodes of more intense precipitation, this change appears to be most marked in lowland areas and less evident in mountains so far. Therefore, although precipitation is increasing in many mountains, it is not increasing as fast as would be expected given a warmer atmosphere.

Together these changes in temperature and precipitation (there is also a change from snow to rain) have been detrimental for snow, ice, and glaciers with nearly all mountain glaciers receding around the world. This has accelerated in many regions in the past 20 to 30 years. There has also been an uphill migration of climate zones, causing many species and their associated habitats to move upslope with it.  Eventually, this could lead to mass extinction events on the top of isolated peaks where there is no longer mountain to move up.

Are these changes seen globally or do they differ by geographic region?

There is certainly variation by region since not all mountains have the same climate to start with. Mountains are spread across the globe from the tropics (e.g. the high mountains of East Africa such as Kilimanjaro, Mt. Kenya and the Rwenzori, and the tropical Andes), through the big chains of the mid-latitudes (e.g. Alps and Himalayas) to the Arctic (e.g. Denali in Alaska).

In general, the enhancement of warming by melting and retreating snow (so called snow-ice albedo feedback) is now less relevant in tropical mountains because there is so little left. The glaciers on Kilimanjaro, for example, are predicted to disappear later this century. Change in the Andes differs from the west to the eastern slopes. The east is influenced by changes in moisture from the Amazon basin, whereas the west is influenced by the Pacific Ocean. Because long mountain ranges such as the Rockies and Andes are barriers, it is common to have different climate change impacts either side.

How do mountain sites compare with lower areas nearby?

This is a very important question but the definition of “lower areas nearby” is not simple or obvious. In the case of high mountain barriers, there are low areas either side and depending on which side you compare the mountain changes with you will get different (and sometimes even opposite) results. We do find however that on average high mountains are warming more rapidly than their immediate surroundings. Nine out of 11 studies which specifically examined this question using paired weather stations found that this was the case.

There is also the issue of what makes up the lowland parts of the globe and whether oceans should be included in this latter category. This makes a big difference to any comparison. It is also the case that land warms up and cools down more quickly than the ocean which responds very slowly to climate warming. Thus, on a global scale, land areas are warming more rapidly than the ocean anyway. If you include ocean in the “lower areas nearby” category then you are almost bound to get higher rates of mountain warming for solely this reason.

What are some societal impacts of warming and changes in snow and ice?

Mountains are often said to be the “water towers of the world” since they provide freshwater supplies across the world. In fact, 1.6 billion people rely on water supplies coming from high mountains. The two most populous countries, India and China, rely on resources from the high plateau of the Himalaya. Snowpack is usually a reliable water supply since it melts gradually, particularly throughout the summer in mid-latitudes, watering the landscape and preventing the environment suffering extreme drought. As a result, bushfires may become more frequent in mountain forests where there is reduced winter snowpack, and more generally in dry climates, such as the western United States.

Most winter tourism in mountains is dependent on snow, and the skiing industry will see major negative impacts. Even in areas where skiing is not the major activity, the presence of snow and ice can enhance tourism, such as on Kilimanjaro in Tanzania where people climb the mountain in part to see the glaciers and gleaming snows at the summit. Finally, when snow is replaced by rain, which is sometimes heavy, mountain flash-flooding and associated hazards such as landslides may become more frequent in many regions.

What are some of the unresolved questions where additional research, data, or modelling are needed?

Although we have quite good knowledge on temperature and associated snowpack changes, our knowledge of mountain precipitation and how it might change is particularly poor. It is very difficult to measure snowfall because a lot of it falls sideways and cannot be recorded by a traditional rain gauge. Mountain rainstorms are also notoriously localized and our observation networks and modelling skills are not yet advanced enough to know what is going on in many cases. It is also the case that we have far more weather stations lower down in mountain valleys (where people live) than high up on the mountain slopes (where it is difficult to access and for humans to survive). Above 5,000 meters, there are very few permanent settlements and no long-term weather stations older than 20 years that can be used for reliable climate analysis.

This data void is extremely serious, especially since we know that critical changes are taking place at this elevation (or above). Computer models can be used to simulate a lot of the effects we are interested in, but the critical issue here is the spatial resolution, which is often too coarse to capture fine-scale details. Because mountains are so complicated – being a wrinkled landscape rather than a flat constant surface- – we need to know what is happening at very small spatial scales, and that means a lot of computer power. This is still a limitation at the current time.

Editor’s Note: It is the policy of AGU Publications to invite the authors of articles published in Reviews of Geophysics to write a summary for Eos Editors’ Vox.

Text © 2022. The authors. CC BY-NC-ND 3.0
Except where otherwise noted, images are subject to copyright. Any reuse without express permission from the copyright owner is prohibited.

Age Hammeken Danielsen has hunted narwhals since he...
Read more
Previous article6 months after the climate summit, where to find progress on climate change in a more dangerous and divided world
Next articleCoral reefs provide stunning images of a world under assault