Model pinpoints glaciers at risk of collapse due to climate change 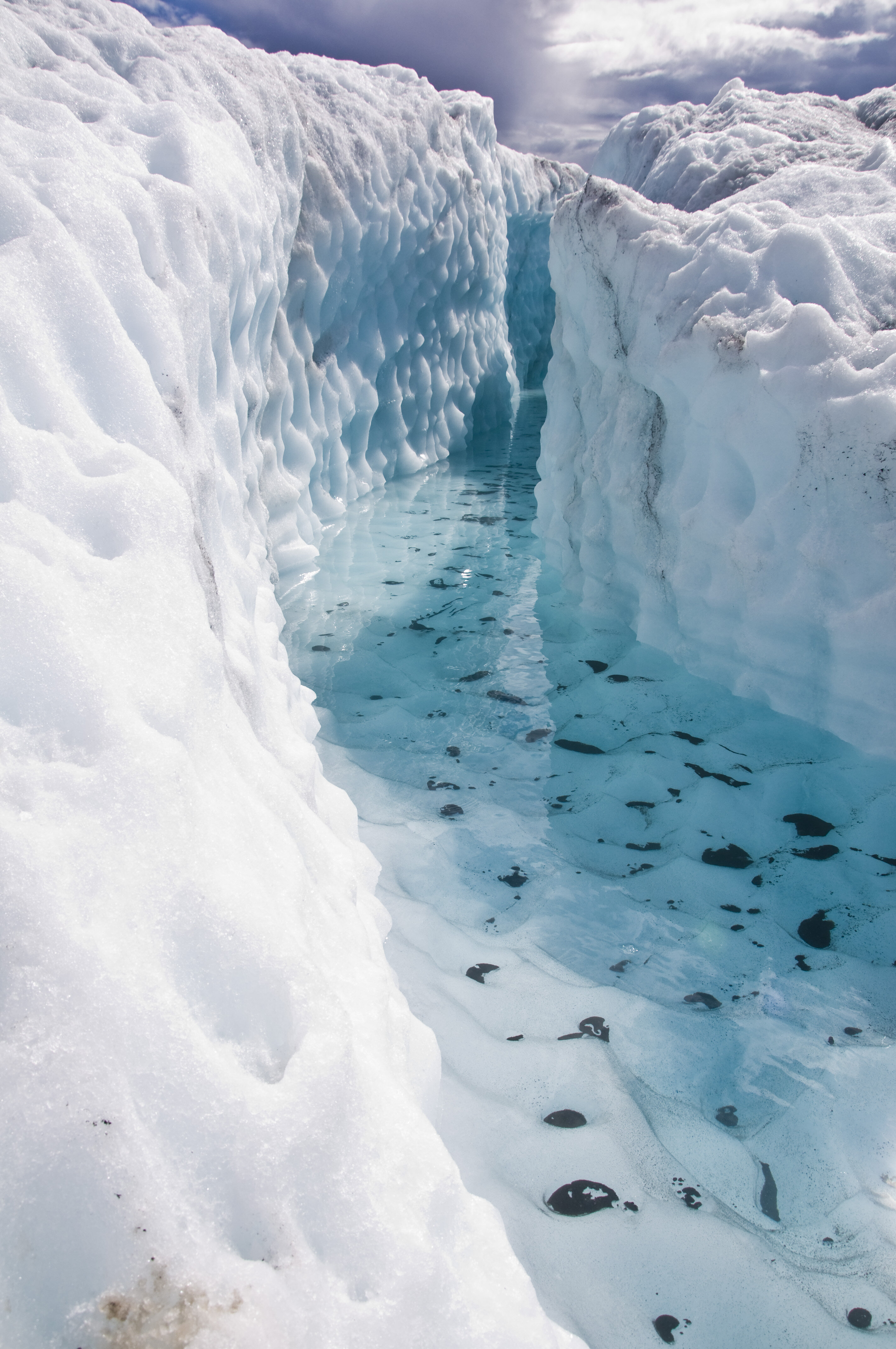 
As climate change warms the planet, glaciers are melting faster, and scientists fear that many will collapse by the end of the century, drastically raising sea level and inundating coastal cities and island nations.

A University of California, Berkeley, scientist has now created an improved model of glacial movement that could help pinpoint those glaciers in the Arctic and Antarctic most likely to rapidly slide downhill and fall into the ocean.

The new model, published last week in the journal The Cryosphere, incorporates the effects of meltwater that percolates to the base of a glacier and lubricates its downhill flow. The new physical model predicts that the most vulnerable glaciers are the thickest ones that have a history of faster flow, even when that rapid flow is periodic.

“The model suggests that thick and fast-flowing glaciers are more sensitive to lubrication than thin and slow glaciers,” said Whyjay Zheng, a postdoctoral fellow in the UC Berkeley Department of Statistics. “The data from Greenland glaciers support this new finding, indicating that those fast and thick glacier beasts might be more unstable than we thought under global warming.”

Zheng built the new model to incorporate a mechanism that has taken on more importance with global warming: meltwater penetrating to the bottom of glaciers and lubricating their downhill movement over bedrock. The Arctic and Antarctic have warmed more than the rest of the world—in March, the Antarctic saw record high temperatures of 70 degrees Fahrenheit above normal, while some parts of the Arctic were more than 60 degrees warmer than average. The warmer weather causes meltwater lakes to form on many glaciers, in particular those in Greenland. The lakes can punch through to the bottom of glaciers by a process called hydrofracture or drain to the bottom through crevasses nearby.

But basal lubrication by meltwater appears to be creating a feedback loop that accelerates glaciers that have already sped up for other reasons, such as changes at the terminus.

So Zheng set out to modify the common perturbation model of glacier flow to take meltwater lubrication into account, using standard equations of fluid flow.

He tested the predictions of the model against glaciers in Greenland, which is part of Denmark, and in Svalbard, a Norwegian archipelago. The prediction that thicker, faster-moving glaciers are more prone to thinning and discharge into the ocean fit with observations of glacier flow over a 20-year period, from 1998 to 2018.

“Basal lubrication creates a positive feedback loop,” Zheng said. “The faster glaciers are more likely to respond faster to basal lubrication, and the following speedup makes them more prone to future lubrications. For example, if a glacier is flowing 3 kilometers per year, and basal lubrication suddenly happens, it will react so fast that you can see the fluctuation of the speed, probably just a few days later, compared to another glacier that would be flowing at 100 meters per year.”

The implication is that thick, fast-moving glaciers around the Arctic and Antarctic should be monitored frequently, just as glaciers are now monitored for changes at the terminus, to anticipate discharges of large icebergs into the ocean that could impact sea level. Better ways of measuring basal lubrication are also needed, Zheng said.

“If the glacier has a potential to be disrupted in a short time and drain a lot of the ice into the ocean, perhaps within a year or two, that could be something we have to worry about,” he said.

Zheng, whose background is in geophysics, planetary science and remote sensing, first got interested in the basal lubrication of glaciers after studying an ice cap in the Siberian Arctic—the Vavilov Ice Cap on the Russian island of Severnaya Zemlya—that suddenly collapsed over a period a few years, at one point in 2015 speeding up to 9 kilometers per year. After analyzing the event, he determined that the stationary ice cap transitioned to an ice stream—a rapidly flowing glacier—in such a short amount of time because of basal lubrication and the advance of the terminus into the ocean, which reduced friction at the front of the glacier that was holding the glacier back. About 11% of the ice cap flowed into the ocean between 2013 and 2019.

“This is the first time we saw such a gigantic collapse of an ice cap,” he said. “Once it started to speed up, it maintained its speed for a long time. We think one of the most likely reasons is that it created a lot of crevasses on the surface, and those crevasses are pipelines for the surface meltwater to go down into the bottom of the glacier. Now, water comes down more easily and effectively reduces the friction, so the glacier can keep sliding fast, and even faster if the climate gets further warmed up.”

Zheng plans to test the new model on some of the marine-terminating glaciers in Antarctica. Meanwhile, through a new online platform called Jupyter Book, anyone can run Zheng’s data through the model equations and Python code to reproduce his results—a publishing standard he hopes will become commonplace for big data research in the future.

Citation:
Model pinpoints glaciers at risk of collapse due to climate change (2022, April 28)
retrieved 1 May 2022
from https://phys.org/news/2022-04-glaciers-collapse-due-climate.html