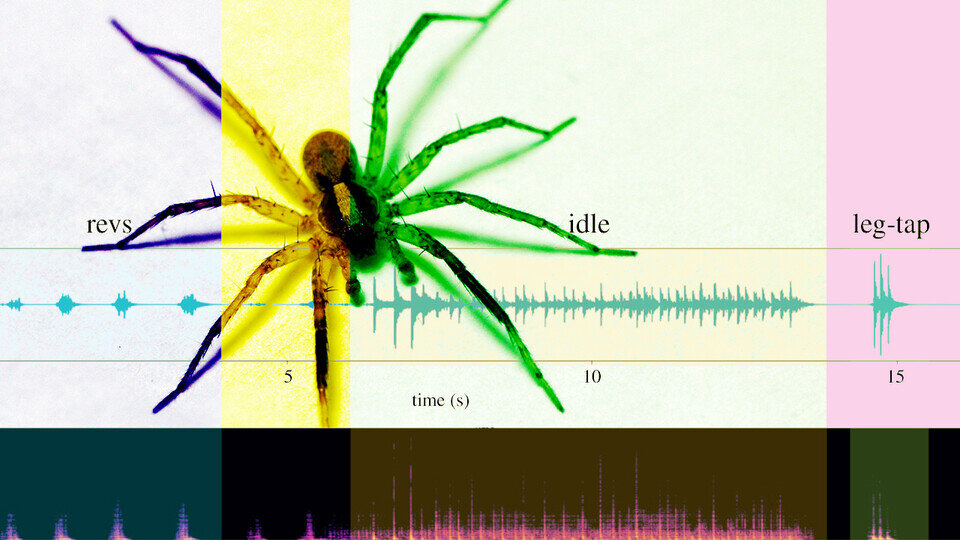 
Some male wolf spiders seem to get luckier than others when it comes to courting females. The secret of their courtship? It’s complicated, says a new study led by the University of Nebraska–Lincoln.

From the elaborate mating dances of the birds-of-paradise to the geometric seafloor-sculpting of the white-spotted pufferfish, males across the animal kingdom have evolved all sorts of intricate behaviors aimed at winning over females.

Not to be outdone, a male Schizocosa stridulans spider that encounters a receptive female will unleash an appendage-scraping, abdomen-quivering, leg-tapping performance that might last five minutes or 45. It’s a menagerie of sound—the rasp of fingernails scratching coarse-grained wood, the rhythmic rattle of a mechanical ticker tape—punctuated by flashes of percussive movement.

After analyzing the inputs and outcomes of 44 such performances, the Nebraska-led team discovered that the nine S. stridulans males rewarded with sex also happened to conjure more complex courtship signals. The finding held across three different measures of complexity previously used to characterize binary code, birdsongs and whale vocalizations but never before the vibratory signals of arachnids.

“Females prefer to mate with males that can produce more complex signals than others,” said Noori Choi, lead author of the study and a recent doctoral graduate of Nebraska.

Whether in the wild or the lab, a female S. stridulans will deposit pheromone-laden silk to let nearby males know that she’s in the mood for love. A male usually opens by tasting her silk and moving his pedipalps, a pair of sensory appendages near the mouth that can also hold and eject sperm. Then come one or two leg-taps—the male drumming his forelegs prestissimo, with blinding speed—followed by a continual bassline of tremors in his abdomen that transmit through his eight legs to the ground and ultimately the female, which feels them rather than hears them.

But such a showy performance can take its toll, Choi said.

“We wanted to understand why the males use complex signals instead of just simple ones,” he said, “because the complex signals take a lot of energy and time to produce and can even increase the risk of (attracting) predators.”

In pursuit of answers, Choi decided to review an experiment that his doctoral adviser, Eileen Hebets, had actually led years earlier. In that experiment, Hebets’ team would deposit a female S. stridulans onto the filter paper of a soundproof chamber a few minutes before introducing a male. The team recorded the ensuing courtship with the help of a camera and a laser vibrometer. By shining the laser down at a piece of reflective tape stuck to the filter paper, then analyzing vibration-driven changes in the frequency and other signatures of the reflected beam, the team captured every last vibratory signal that a male sent a female’s way. The camera, meanwhile, caught any visual flourishes accompanying those vibrations.

Previous studies of the courtship had mostly examined parts of the whole. Choi was more interested in looking at the complexity itself. To do it, he turned to several methods of analysis, all developed by computer scientists, that no arachnologist had thought to use before. One, which has served as a basis for data-compression algorithms, essentially measures the number and recurrence of distinct patterns within a sequence of signals. Another helps quantify the average amount of information conveyed by a given signal.

“I’ve been studying complex signaling for 25-plus years,” said Hebets, Charles Bessey Professor of biological sciences at Nebraska. “The progression of my work has very much followed the field, where, initially, it was focusing on one sensory mode (of signaling) and then moved toward the study of multimodal signaling. Even within multimodal studies, we would look at each signaling mode independently. Finally, we started to look at inter-signal interactions but still treated each sensory modality and their components as discrete.”

“Now we’re at the point, with some really talented people who have quantitative skills, of coming up with computational ways to look at how all of these things might interact, and how the entire package might be important in ways that we would never understand if we were just looking at components A, B or C.”

Regardless of which of the three statistical analyses he applied, Choi found that the nine successful males produced more complicated vibratory signals—akin to improvising, playing the off-beats, changing up the tempo—than the 35 males that were turned down.

Other findings suggested that males may have been rewarded for paying attention, too. The males that did manage to mate ratcheted up their signal complexity even further with heavier females, which are generally more likely to birth and rear a large, healthy cluster of spiderlings. Unlike those that were unlucky in love, the successful males also tended to up the complexity of their signaling as their courtship went on, indicating that they may have been responding to signs of interest from the females.

Which still leaves a fundamental question that Choi, Hebets and their fellow arachnologists are keen to answer: Why would a female prefer a male that can, or is at least willing to, court her with a more complex signal?

Maybe, Choi said, the complexity points to some quality in a male that a female would like to see passed along to her offspring. The team found no connection between the physical prowess of a male and the complexity of his signaling. But the findings do dovetail with an earlier study that suggested females might be seeking two traits, vigor and skill, needed to coordinate such a complicated courtship.

“Females aren’t necessarily looking for the biggest male or the loudest male or the strongest male,” Hebets said. “But maybe they’re looking for a male that is really athletic and can coordinate all of these different signals into one display.”

It’s also possible, she said, that female S. stridulans are just better at perceiving and processing complex signals, leading them to prefer the males that produce those signals. Another, more familiar explanation? That wolf spiders, like humans, can grow bored with suitors unwilling to mix up the status quo once in a while.

“There are a lot of studies that show that animals prefer novelty, in some capacity,” Hebets said. “Increasing complexity, especially through time, you could almost think of as novelty—the males constantly changing things up to keep the females’ interest.”

The team detailed its findings in the journal Biology Letters.