A new game developed by Chennai students spreads awareness about different ecosystems, species and what we can do to help them

A new game developed by Chennai students spreads awareness about different ecosystems, species and what we can do to help them

Can a game of cards increase environmental awareness? A group of educators and students seem to think so. Having worked for five months on a project by city-based Palluyir Trust, they now present The Wilderness game.

The game is essentially a pack of cards — think cricket or wrestling cards — but with sea creatures instead of The Undertaker, and a flood of real-world information thrown in. Environmentalist M Yuvan and Chennai students Nanditha Ramsatagopan, Charlotte Jeffries and Rohit Srinivasan, designed it for people above the age of 10. The gameplay format keeps in mind millennial and Gen-Z mindsets.

Rohith explains: “I remember being very excited about playing Pokemon as a kid, and stepping out in the hope of seeing pretend ones. This game offers that kind of feeling, but with creatures you can actually see in the real world.” And with an ecology card handy, you will know just where to find them.

What is an ecology card, you ask? It’s fairly simple. Each pack has 110 cards — ecology cards, species cards and action cards — and can be played in two ways: 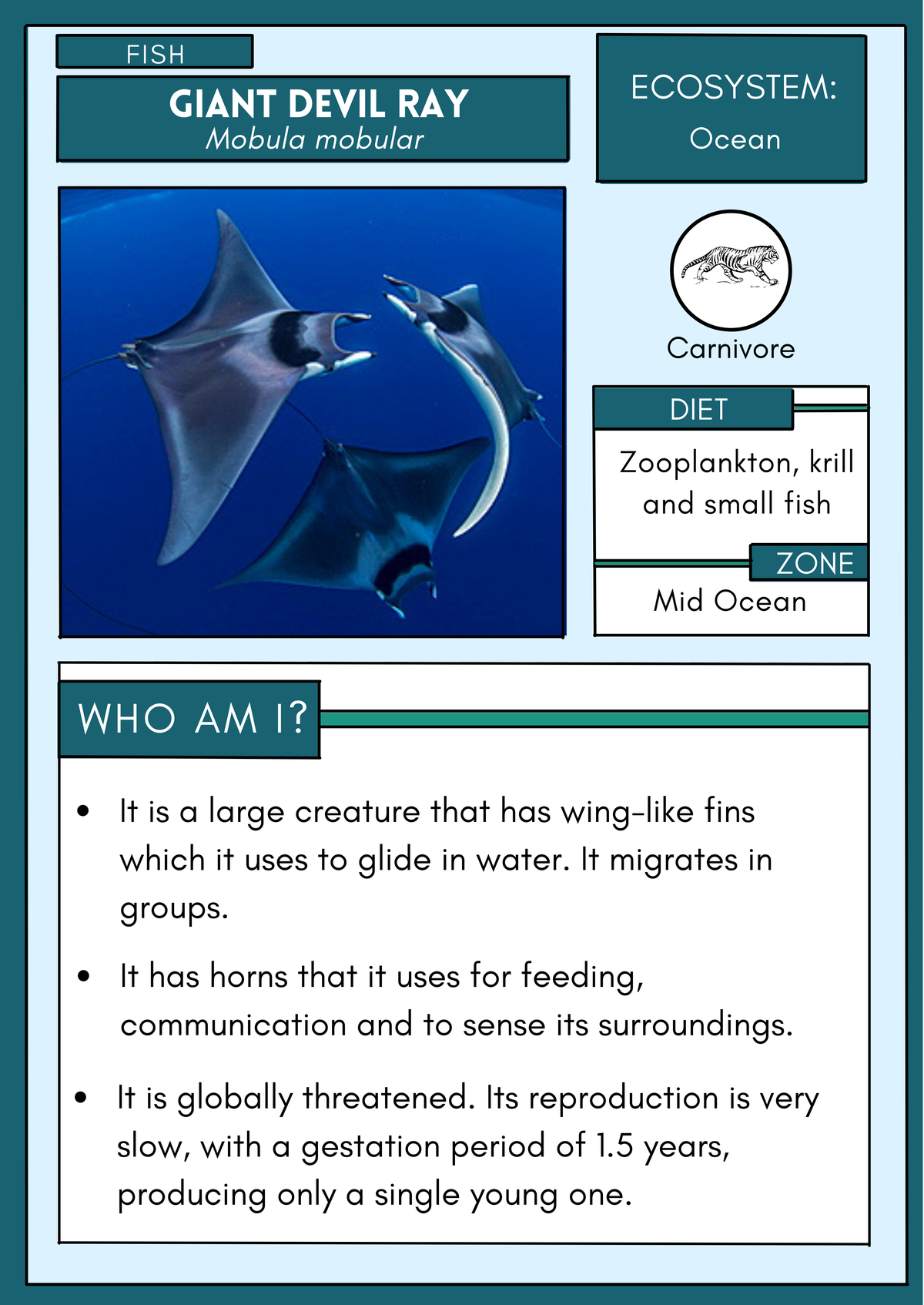 A species card from The Wilderness

“The first is a simple ‘who am I’ game,” says Rohith, “You pick a species card, read out some of the hints printed on it to your friends, and they guess what species it is.” The hints can be diet, location (“flamingoes are found in Pulicat, Mumbai and the Rann of Kutch,” points out Rohith), zone (“like arial beings or intertidal beings,” says Charlotte) or the creature’s role in the ecology.

“There are seven or eight ecological roles a species can play, that we have added to the game,” says Charlotte. She elaborates on them: “Architects are the ones that build the ecosystem, like morning glories who hold sand together to create dunes and beaches. Pollinators help create plants, fruit and seeds. We also have herbivores, carnivores, omnivores and scavengers and detritivores.” Then there are autotrophs, the non-consumers of the natural world, who make their own food using raw material and energy instead of feeding on plants or animals.

These ecological roles are key to the more elaborate, fun version of The Wilderness. Essentially played as a card game, it needs players to have a full “hand”. To achieve this, says Charlotte, “The person needs to have at least each ecological role, and one card in each ecosystem. Whoever does this fastest is declared the lead naturalist.” 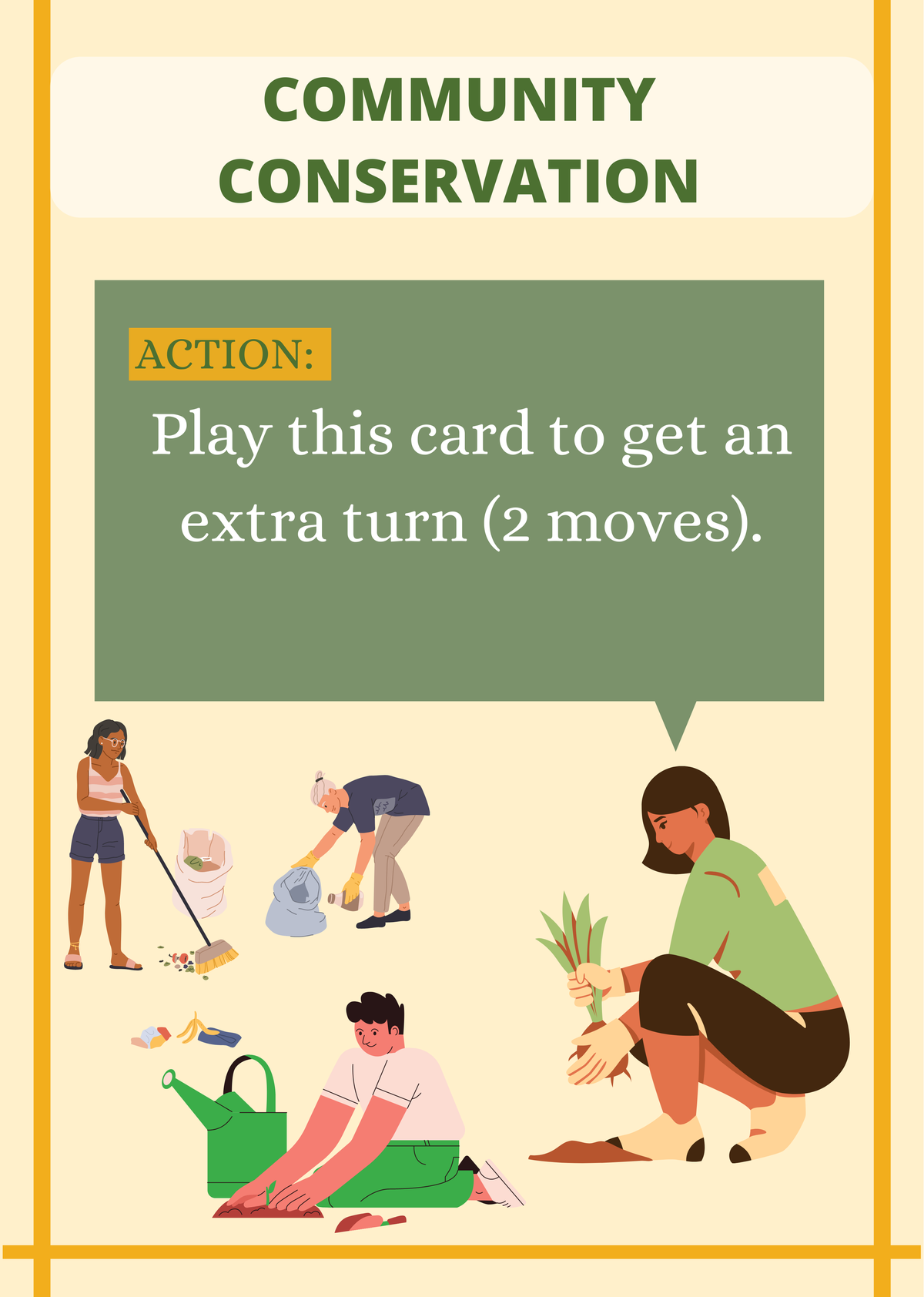 An action card from The Wilderness game

The deck also has action cards — like Trawling, Community Conservation and Declaration Of Protected Areas — that you can use to help yourself or to stop others.

Not all fun and games

“The idea was pitched last year, we formally started the process of making the game in January 2022,” says Nandita. The “process” included multiple tasks, from ideating and testing gameplay to production and design.

“We wanted the cards to be simple to look at, and colourful for children,” says Nanditha, adding, “The four habitats have specific background colours based on them. For example, the beach is ochre yellow and light blue, while the marsh is olive and earth tones.” Evidently, when it comes to Nature, it is easy to feel inspired.

Adds Charlotte: “We played the game a bunch of times to test it out, and the rules kept changing. We started out with a hand of seven cards each, but that made the game too long, so now we start with three each. We also decided to have separate discard piles for each ecosystem instead of one common one, to help people build their hands more easily.”

With Rohith in Ahmedabad currently to pursue his BSc, a lot of the collaboration took place online. “Sometimes we even had to play the game online, trusting people not to cheat. We also got our friends to play with us for feedback,” says Charlotte. And they were more than happy to oblige.

The Wilderness game can be ordered from palluyirtrust.org. An eco card from The Wilderness

Delta-8 THC is one of the most talked-about...
Read more
Previous articleNatureMetrics Raises $15 Million for Its Cutting-Edge Biodiversity Monitoring Solution
Next articlePreparing for climate change’s effects more than ever critical: President