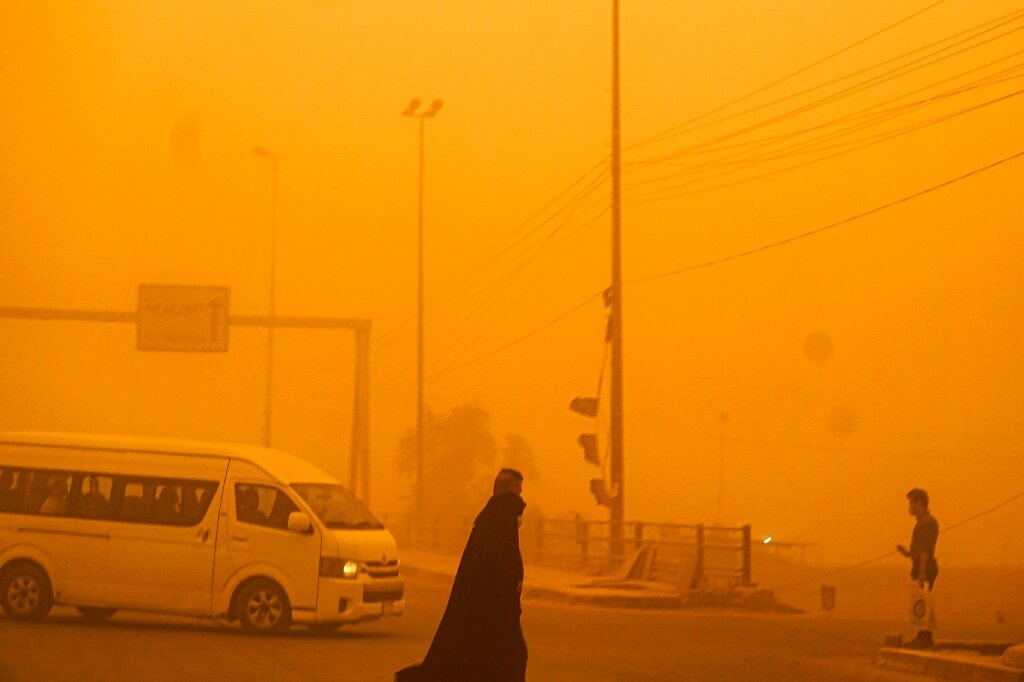 
Another sandstorm that descended Monday on Iraq sent at least 2,000 people to hospital with breathing problems and led to the closure of airports, schools and public offices across the country.

It is the eighth duststorm since mid-April to hit Iraq, which has been battered by soil degradation, intense droughts and low rainfall linked to climate change.

The last one earlier this month led to the death of one person while 5,000 others had to be hospitalised for respiratory problems.

On Monday a thick cloud of dust enveloped the capital Baghdad in an orange glow and blanketed many other cities including the Shiite shrine city of Najaf to the south, and Sulaimaniyah, in the northern Kurdish autonomous region, AFP correspondents said.

Yellow and orange sand covered building roofs, cars and even crept into homes.

Authorities in seven of Iraq’s 18 provinces, including Baghdad, ordered government offices to shut.

But health facilities remained open to assist those most at risk, including the elderly and people suffering from chronic respiratory diseases and heart ailments.

By midday at least 2,000 people were admitted to hospitals across Iraq in need of oxygen, said health ministry spokesman Seif al-Badr.

AFP correspondents saw around 20 patients, most of them elderly men, at Baghdad’s Sheikh Zayed Hospital.

One of them was Hadi Saada, 70, lying on his side on a bed in the intensive care unit hooked to a respirator. He struggled to breathe.

“It is his third time in hospital” since the sandstorms began in April, said his son Mohammed Saada, adding that his father had a heart condition.

Another patient, Khaled Jassem, 70, was also hooked to an oxygen tank.

“We’ve been here since 8:00 am… My father has a heart ailment, diabetes, hypertension and is suffocating on the dust,” said his son Walid Jassem.

At least 75 people struggling to breathe were admitted Monday to Sheikh Zayed, said Talib Abdelmoneim Nejm, one of the ICU officials.

Airports in Najaf and Sulaimaniyah were also closed for the day, the agency said.

The Middle East has always been battered by dust and sandstorms but they have become more frequent and intense in recent years.

The trend has been associated with overuse of river water, more dams, overgrazing and deforestation.

Iraq is rich in oil and is known in Arabic as the land of the two rivers—in reference to the legendary Tigris and Euphrates rivers.

But the supply of water has been declining for years and Iraq is classified as one of the world’s five countries most vulnerable to climate change and desertification.

In April, an environment ministry official warned that Iraq could face “272 days of dust” a year over the next two decades.

Oceans Help Us Fight Climate Change, Now We...
Read more
Previous articleLand Restoration a Must to Mitigate Global Desertification
Next articleCanadians will get their say on how to adapt to climate change