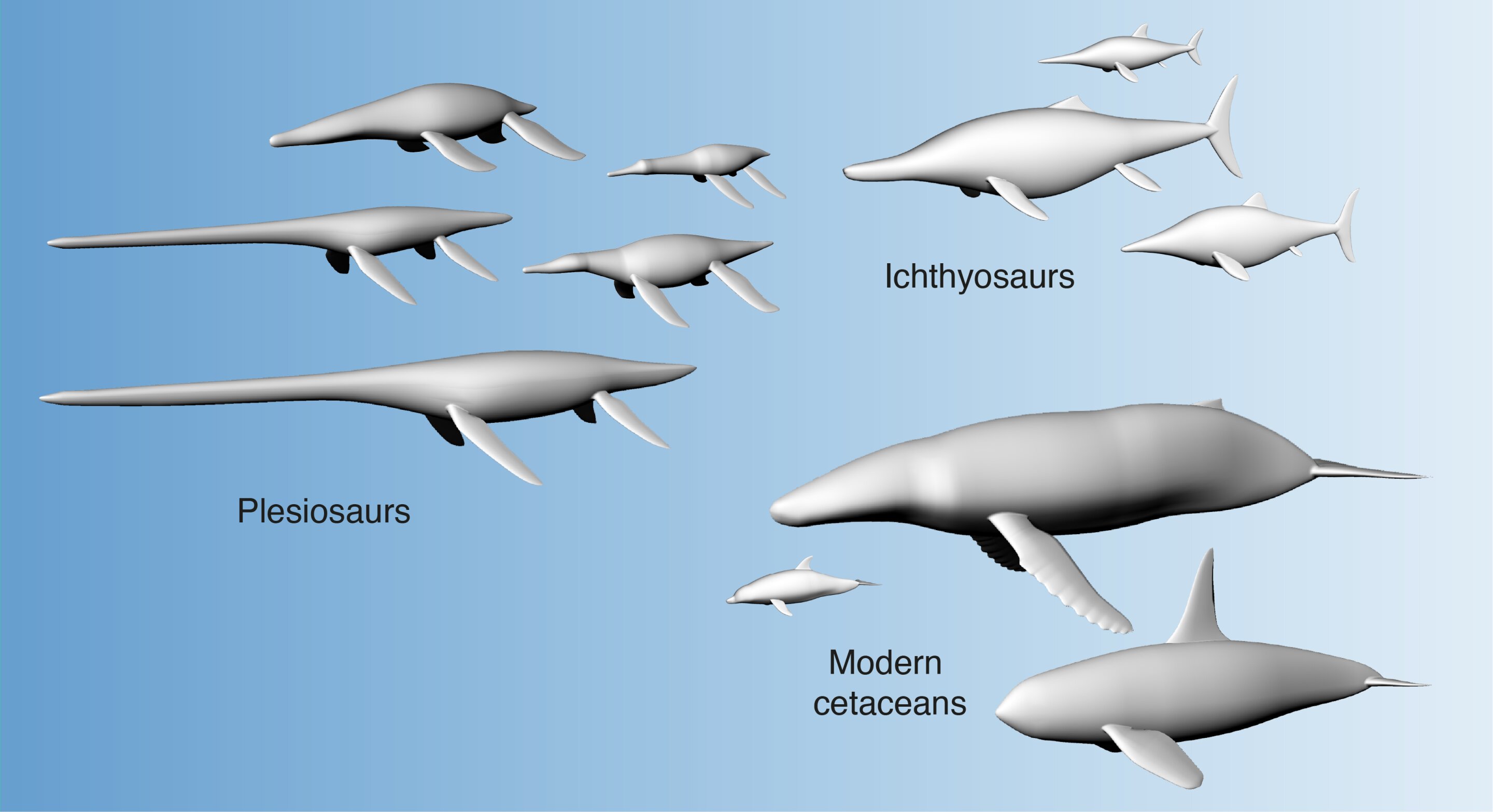 
Scientists at the University of Bristol have discovered that body size is more important than body shape in determining the energy economy of swimming for aquatic animals.

This study, published today in Communications Biology, shows that big bodies help overcome the excess drag produced by extreme morphology, debunking a long-standing idea that there is an optimal body shape for low drag.

One important finding of this research is that the large necks of extinct elasmosaurs did add extra drag, but this was compensated by the evolution of large bodies.

Tetrapods or ‘four-limbed vertebrates’, have repeatedly returned to the oceans over the last 250 million years, and they come in many shapes and sizes, ranging from streamlined modern whales over 25 meters in length, to extinct plesiosaurs, with four flippers and extraordinarily long necks, and even extinct fish-shaped ichthyosaurs.

Dolphins and ichthyosaurs have similar body shapes, adapted for moving fast through water producing low resistance or drag. On the other hand, plesiosaurs, who lived side by side with the ichthyosaurs in the Mesozoic Era, had entirely different bodies. Their enormous four flippers which they used to fly underwater, and variable neck lengths, have no parallel amongst living animals. Some elasmosaurs had really extreme proportions, with necks up to 20 feet (6 meters) long. These necks likely helped them to snap up quick-moving fish, but were also believed to make them slower.

Until now, it has not been clear how shape and size influenced the energy demands of swimming in these diverse marine animals. Palaeobiologist Dr. Susana Gutarra Díaz of Bristol’s School of Earth Sciences and the National History Museum of London who led the research, explained: “To test our hypotheses, we created various 3D models and performed computer flow simulations of plesiosaurs, ichthyosaurs and cetaceans. These experiments are performed on the computer, but they are like water tank experiments.”

Dr. Colin Palmer, an engineer involved in the project said: “We showed that although plesiosaurs did experience more drag than ichthyosaurs or whales of equal mass because of their unique body shape, these differences were relatively minor. We found that when size is taken into account, the differences between groups became much less than the shape differences. We also show that the ratio of body length to diameter, which is widely used to classify these aquatic animals as more or less efficient, is not a good indicator of low drag.”

Dr. Gutarra Díaz said, “We were also particularly interested in the necks of elasmosaurs and so, we created hypothetical 3D models of plesiosaurs with various lengths of necks. Simulations of these models reveal that past a certain point, the neck adds extra drag, which potentially would make swimming costly. This ‘optimal’ neck limit lies around twice the length of the trunk of the animal.”

Dr. Benjamin Moon, another collaborator and expert on marine reptiles, continued: “When we examined a large sample of plesiosaurs modeled on really well preserved fossils at their real sizes, it turns out that most plesiosaurs had necks below this high-drag threshold, within which neck can get longer or shorter without increasing drag. But more interestingly, we showed that plesiosaurs with extremely long necks also had evolved very large torsos, and this compensated for the extra drag!”

Dr. Tom Stubbs, another co-author summarized: “This study shows that, in contrast with prevailing popular knowledge, very long necked plesiosaurs were not necessarily slower swimmers than ichthyosaurs and whales, and this is in part thanks to their large bodies. We found that in elasmosaurs, neck proportions changed really fast. This confirms that long necks were advantageous for elasmosaurs in hunting, but they could not exploit this adaptation until they became large enough to offset the cost of high drag on their bodies.”

Professor Mike Benton, also part of the research, commented: “Our research suggests that large aquatic animals can afford to have crazy shapes, as in the elasmosaurs. But there are limits: body sizes cannot get indefinitely large, as there are some constraints to very large sizes as well. The maximum neck lengths we observe, seem to balance benefits in hunting versus the costs of growing and maintaining such a long neck. In other words, the necks of these extraordinary creatures evolved in balance with the overall body size to keep friction to a minimum.”

Sticking your neck out: How did plesiosaurs swim with such long necks?