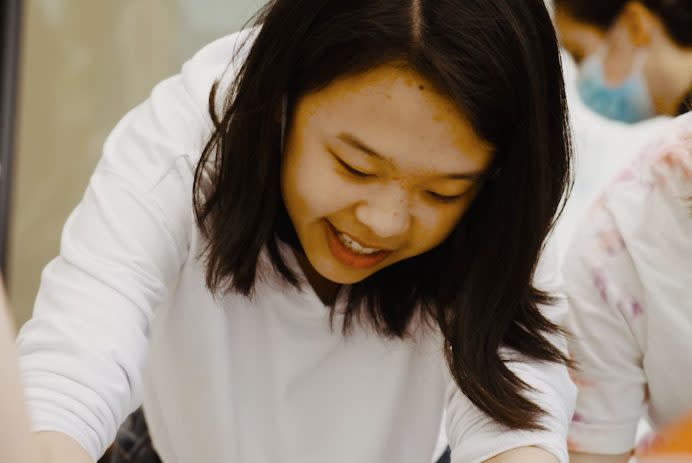 Iris first became aware of the climate crisis as a child growing up in Maryland. “I learned about the climate crisis through school,” Iris tells In The Know. “A lot of that knowledge really inspired me to get more involved in my local community, so I went through my newspaper and such looking for local events and started showing up at some of those.”

Iris started volunteering for a variety of climate organizations, including Howard County Climate Action and Less Plastic Please. While working with these organizations, Iris began to notice something peculiar: Despite the fact that climate change impacts the lives of young people around the world, there were very few young people getting involved.

“I sort of noticed how I was one of the only young people there,” Iris recalls. “I think that really pushed me to see this crisis as more important because of how I felt like I was the only one there, and how it shouldn’t just be me because this affects my generation so, so much.”

Iris decided they wanted to fight climate change by helping overlooked communities become more involved with the movement. Their first step was getting involved with Fridays For Future, the youth-led climate strike movement started by Greta Thunberg. “I decided to try to get involved with Fridays For Future in the U.S. It was not exactly the easiest thing to do because it mostly revolved around climate striking and that wasn’t really accessible,” they explain. “We realized that a lot of people from many different backgrounds cannot climate strike every single week.”

Iris co-founded Fridays for Future Digital in order to give voice to climate activists who were unable to participate in climate strikes. “We wanted to be able to uplift those voices and make sure that they can be channeled into real impactful action,” they tell In The Know. “Digital platforms can really help increase the representation there and improve accessibility and inclusivity.”

According to Iris, elevating marginalized voices is crucial in the fight against climate change because, oftentimes, it is marginalized communities who are most affected. “Movements that are only led by white people have so many problems, and not being inclusive means that what we’re advocating for isn’t really benefiting the entirety of society,” Iris explains. “As someone who also has certain privileges, it’s really important to be able to make room in the movement for those who don’t have as much privilege. Because of how the climate crisis impacts people with less privilege, it’s really essential for true climate justice.”

With Fridays For Future Digital, Iris finds ways for people to get involved with climate justice that go beyond striking. They plan digital campaigns, speak at events, and strategize creative ways to promote climate justice. According to Iris, there are a multitude of ways to fight climate change, but the first step is to commit to getting involved.

“There are so many different ways for young people to get involved and understand what’s going on in your community,” they tell In The Know. “It’s really important for young people to take action. That’s what really helps keep the movement progressing.”

The post Iris Zhan is helping to raise awareness about climate change by creating digital campaigns for advocate groups appeared first on In The Know.

More from In The Know:

I tried Alo Yoga’s new 60-second detox face mask, and I’m kind of obsessed with it

Guys, today is your last chance to grab the internet’s favorite Brooklinen sheets for 20% off