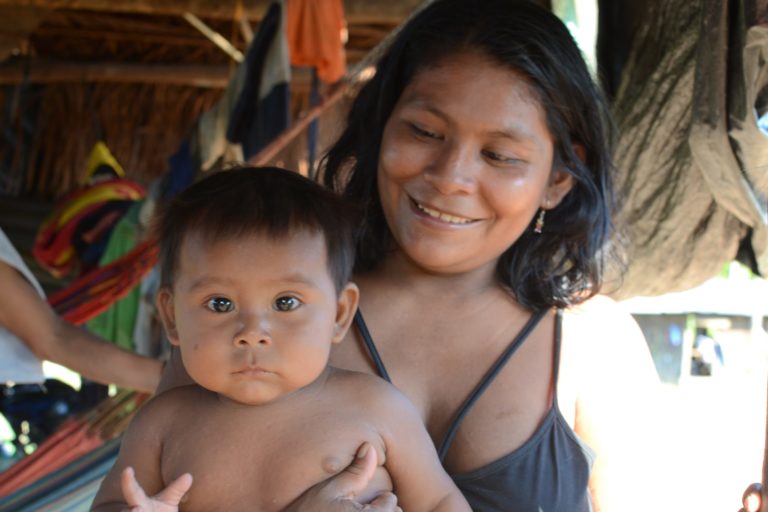 
AGUA BONITA CAMP, Colombia – Walking all day through the jungle to visit the encampments of friends and relatives is what Tumni Abtukaru misses the most about life before his community, the Indigenous Nukak, were evicted from their ancestral homeland.

Arriving at an encampment, Abtukaru says he would be greeted by singing and dancing. They would then drink chicha—a fermented drink made from chontaduro, a peach palm fruit—and talk late into the night.

Now, home is a dilapidated shed in Agua Bonita camp, a 30-minute drive from the departmental capital of San José del Guaviare in Colombia’s Amazon region.

After being forced from their homes by the Revolutionary Armed Forces of Colombia (FARC) during the country’s civil war in the 1980s, the communities see returning to their territory, a one million-hectare (2.47-million acre) Indigenous reserve, as the only way to survive and live dignified lives.

About 40% of the Nukak population, who until the war had no contact with the world outside, died within five years of their eviction. Most people died from exposure to diseases such as influenza. Colombia’s Constitutional Court regards the remaining 600 Nukak as at risk of physical and cultural extermination.

Currently, an estimated 120 live in the Indigenous resguardo (reserve), refusing to leave despite the danger of FARC dissidents in the area, while most are in camps.

Bringing their trek to return home one step closer, a recently signed coexistence agreement between the Nukak living in camps and local campesinos is providing the Nukak with the opportunity to live their traditional ways of life.

The agreement is meant to act as a potential stop-gap to their cultural eradication – and create space to advocate for their return to their ancestral territory.

The fall of forest guardians

According to research by the National University of Colombia, using numerous plants and constantly changing locations—whether for optimizing resources, social encounters, rituals, or exchange of products—the Nukak preserved the forest cover and increased wildlife populations. This is done in part by dispersing fruit seeds which later become a food source for local birds, rodents and primates.

The way the Nukak cultivate wild species is different from what is seen in chagras—a food garden found in other parts of the Amazon. Despite there being relatively few food sources available for human consumption in the rainforest, the Nukak created unique forms of cultivation and domestication that tend to preserve the forest’s ecological integrity.

“The presence of Nukak agricultural knowledge and their disinterest in changing traditional subsistence patterns to one of intensive horticulture suggests not only a conviction to remain hunter-gatherers but also a different way of appreciating nature and transforming it,” states the report.

Yet most of the forests around Agua Bonita, and the 12 other settlements on the outskirts of urban centers in Guaviare, have been turned into pasture for raising cattle.

This deforestation is part of a wider trend. Guaviare is one of Colombia’s most highly deforested regions. In 2020, 16% of the country’s deforestation occurred in the department and came to a total of about 27,469 hectares (67,878 acres), according to Colombia’s Institute of Hydrology, Meteorology and Environmental Studies (IDEAM).

Rocío Caballero, a lawyer from Akubadaura, an Indigenous lawyer’s movement which worked with the Nukak since 2017, told Mongabay that extensive deforestation means the Nukak in the camps have no choice but to venture further afield to hunt and look for food.

As the Nukak are a first contact people, she says, they had no previous conception of trade or private property. In one instance, a campesino’s chicken was seen as a wild animal, bringing the Nukak into conflict with the locals.

“The campesinos say they [the Nukak] came and took their things […] to feed their children and their families,” says Caballero. “And at the same time, the Nukak say that we had a piece of forest there and you cut it down.”

According to Caballero, this created further distrust between both communities and campesinos wouldn’t allow Nukak people to enter their land to hunt, fish or collect plants. There have been threats to shoot Nukak individuals, and some campesinos have occasionally fired in the air to scare people away.

Those residing in the camps struggle to gather food and follow their customary lifestyles. In addition to the lack of services in the camps, the community is impacted by high levels of malnutrition, skin infections, diarrhea, other common diseases, and social malaises, such as inter-generational loss of traditional knowledge.

The path back home

To ease interethnic tensions, the Nukak and campesinos signed a coexistence agreement in November, facilitated by Colombia’s Truth Commission (Comisión de la Verdad). The agreement will also provide greater opportunities for the Nukak to access nearby forests.

The agreement, named Tui Chañ As in Nukak language (meaning “living together”), is the first of its kind agreement between campesinos and Indigenous communities in Colombia.

The participants established lines of work and dialogue committees to implement the agreement based on its eight principal issues—among them to protect the forest, respect ancestral authority and reduce gender-based violence.

Although not legally binding, the agreement creates spaces for dialogue and advocates for the provision of basic services in the camps.

Esneider, a leader of the Nukak governing council Mauro Munu, told Mongabay that this includes housing, health and education services. Mauro Munu advocates for returning the Nukak to their territory, cultural revitalization and greater guarantees of individual and collective rights.

“Just the fact that they’ve sat down, talked, and managed to agree at least on the bare minimum is a giant step forward for a problem that’s been going on for decades,” says Tatiana Mendoza Salamanca, climate and forest advisor for the Norwegian Embassy in Colombia.

The Norwegian government has been a significant supporter of efforts to implement Colombia’s peace accord and stop deforestation in Colombia’s Amazon. In 2019, with the governments of Germany and the UK, they renewed a pledge for an additional $366 million to help combat deforestation.

“The [coexistence] agreement combines both things which the embassy celebrates,” says Salamanca. “It is something very relevant in the framework of cooperation.”

Since 2017, the Nukak have worked with lawyers to draft a return plan which included the government providing them with safety guarantees. Yet, Caballero says that they haven’t seen much willingness from politicians to move the plan forward. According to the Defense Ministry, this is due to the presence of FARC dissidents in the reserve, which makes their return too dangerous.

Similarly to the adjacent 855,000-hectare (2.1 million-acre) Nukak National Nature Reserve, the Indigenous Nukak reserve is plagued by dissidents and landmines.

Caballero told Mongabay that although the Nukak haven’t been allowed to pass, they have noticed that other people have been given permission to move through dissident-occupied areas. There are cattle pastures and palm plantations in the Nukak Indigenous reserve, he says. Because they fear retaliation, locals are afraid to say who is behind the deforestation. Rumors point to the dissidents, campesinos and ranchers from other Colombian departments, including the Sinaloa Cartel.

Destruction of the social fabric

Colombia’s over 50-year civil war between the government and the FARC left over 260,000 people dead and more than 7 million people internally displaced. Guaviare was especially hard hit by the war. A continued lack of state presence made the department a strategic point for illegal armed groups to cultivate coca.

Today, both Nukak and campesino communities suffer from common problems, such as lack of public investment and severe impacts of the armed conflict, says Pedro Arenas, the former mayor of San Jose del Guaviare. Arenas is also the co-founder of the illicit crop observatory, Viso Mutup, which assisted the Nukak with the coexistence agreement.

According to research from Colombia’s National University, Nukak children learn early on how to observe the forest and all its ecological relationships. They become familiar with the plant and animal diversity and spend hours exploring, playing, looking for animals and understanding the progress of fruits or growing leaves as they grow. However, today, this relationship between humans and nature has fractured.

“[Nukak] children and young people have been displaced, some of them for 15, 16 or 17 years,” says Arenas. “[They] only known the settlements.”

“So, it is difficult for them to have the same romantic view as some anthropologists who want the Nukak to return to the forest and live as they did until 40 years ago, walking in the jungle.”

The disconnect from their territory also means that many young Nukak are not taught their cultural and agricultural practices, leading to the dissolution of the community’s social fabric.

The Colombian Center for Health reported that 77% of Nukak young people use drugs and 57% report depression and anxiety. According to a 2020 submission to the Truth Commission, Nukak women and girls expressed high levels of persistent sexual violence.

“Solving the problem requires an institutional effort, if not, we are going to keep repeating the cycle of terrible news about the Nukak where people read the news, are shocked for a few minutes and then forget about it,” says Patricia Tobón Yagarí, who leads the Truth Commission’s work in the region.

She was part of the team which wrote the ethnic chapter of Colombia’s 2016 peace accord, signed between the government and the FARC. This accord made specific provisions to urgently remove land mines from the Nukak territory and implement a strategy for returning the Nukak to their lands.

Although the Constitutional Court has called on institutions to comply with a safeguard plan to protect the Nukak and 33 other Indigenous groups threatened by violence, displacement, illicit crop production and armed actors, this plan, including legal rulings and court orders made over the years, has not been implemented.

Colombian President Duque’s government has been widely criticized by human rights organization for faltering in the implementation of the peace accord. The peace accord also includes sections that provide rural development opportunities to campesinos, such as programs to substitute illegal substances (PNIS) and for territorial development (PDET).

The United Nation’s Verification Mission in Colombia told Mongabay in a written statement that the peace accord provides opportunities for the transformation of regions affected by the conflict and that the coexistence agreement can help address the structural problems faced by both communities and improve their conditions.

“There are no opportunities in these territories,” said Jaime Edgar Mejia, a campesino from Guaviare who signed the coexistence agreement.

Speaking at an event in Bogota in April about the coexistence agreement, Meijia told the audience that campesinos felt like their only hope rested in the international community and the Truth Commission.

“We came here to find a solution,” said Meijia. If governmental representatives can’t help, he says: “We’ll have to cut more forest, plant more coca, and our young people will have to continue […] joining illegal armed groups.”

Related listening from Mongabay’s podcast: We speak with Scott Wallace, a journalism professor at the University of Connecticut, National Geographic writer, and author of a New York Times best-selling book on the importance of protecting uncontacted indigenous groups in the Amazon. Listen here: