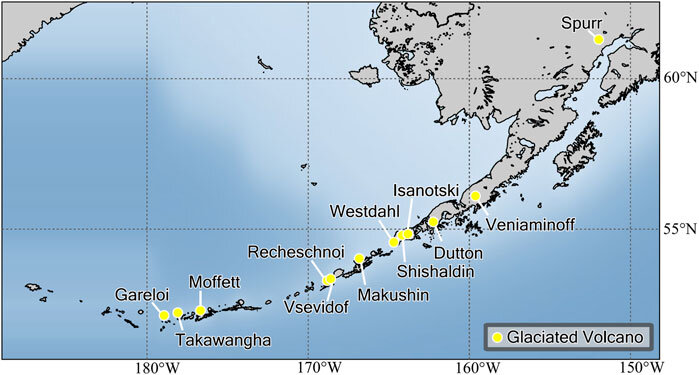 
The Westdahl Peak volcano in Alaska last erupted in 1992, and continued expansion hints at another eruption soon. Experts previously forecasted the next blast to occur by 2010, but the volcano—located under about 1 kilometer of glacial ice—has yet to erupt again. Using the Westdahl Peak volcano as inspiration, a new volcanic modeling study examined how glaciers affect the stability and short-term eruption cycles of high-latitude volcanic systems—some of which exist along major air transportation routes.

“Volcanic forecasting involves a lot of variables, including the depth and size of a volcano’s magma chamber, the rate at which magma fills that chamber and the strength of the rocks that contain the chamber, to name a few,” Lucas said. “Accounting for overlying pressure from polar ice caps is another critical, yet poorly understood, variable.”

The Westdahl Peak volcano, located along the Aleutian Island chain in western Alaska, serves as a great model for study because it is well instrumented and continuously monitored by the Alaska Volcano Observatory, the researchers said.

“The Aleutian Islands are fairly remote, but they lie along a major air transportation and trade route connecting North America and East Asia,” Albright said. “Volcanic ash in the atmosphere is hazardous to aircraft engines and can cause major disruptions in air traffic, so more accurate forecasting—even on the scale of months—can provide critical safety information for air traffic and nearby inhabitants.”

To determine how overlying pressure from polar ice can affect the timing of eruptions, the team ran computer simulations of magma reservoirs of different sizes and shapes, the study reported. Researchers varied the flux, or amount of magma that enters the system from below, to determine when the corresponding pressure exceeds the strength of the surrounding rock, which may cause rock failure leading to an eruption.

“We then insert parameters for different thickness of ice into each model scenario and compare how long it takes to reach that point of failure with and without ice,” Albright said.

The study reported that relative to the time it should take for Westdahl Peak to erupt without glacial ice, the presence of ice will increase the stability of the magma system and delay the eruption date by approximately seven years.

“More specifically, the models without the presence of the confining pressure of the ice cap calculated a time to eruption of about 93 years,” Lucas said. “Adding a 1-kilometer-thick ice cap to the model then increases the eruption date to approximately 100 years. Models are not a perfect tool to use in forecasting future eruptions, however, we are mainly interested in the increase in this time as a result of the increased ice load.”

In general, the study results indicated that ice thicknesses of 1 to 3 kilometers can delay ice-covered volcano eruptions for years to decades.

“These increases in time may seem insignificant on a geologic scale, but it is significant on the human time scale,” Gregg said. “Going forward, it will be important to account for glacial ice cover in future forecasting efforts.”

The team acknowledged that previous studies considered how seasonal changes such as annual snow cover might affect the eruption interval of volcanoes. However, when compared with the total overlying load that the magma chamber must overcome to erupt, small seasonal variations are unlikely to play a major role for most systems.

“Seasonal ice loss may impact eruption timing for systems close to failure,” Zhan said. “Furthermore, it will be important to consider how climate change and glacial ice melt might impact Westdahl Peak and other high-latitude volcanoes in the future.”

The results of the study are published in the journal Frontiers in Earth Science.

Age Hammeken Danielsen has hunted narwhals since he...
Read more
Previous articleDraft report on Desertification and drought to be discussed at COP15
Next articleScientist-moms explore why climate change messaging falls flat