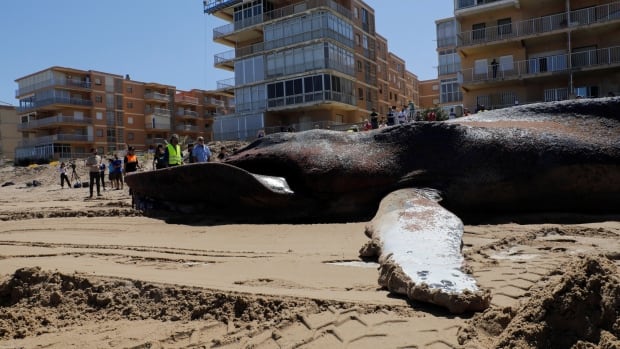 
A 14-metre long humpback whale freed from entanglement in an illegal drift fishing net off the island of Mallorca has died on another Spanish beach more than 300 kilometres away.

A team of divers had freed the 30-tonne whale from its earlier plight after it was spotted by a ship about five kilometres off the coast of Mallorca in the Balearic Islands east of Spain a week ago.

It swam away blasting water out of its spout but was then found stranded on a beach in Valencia on Spain’s mainland on Thursday.

Specialists from the Oceanography Foundation who examined the whale said it was extremely weak and had several cuts to its dorsal fin. They decided the massive animal would not survive a return to the sea, and it died soon afterwards.

“It is horrible. This has been really depressing,” said Gigi Torras, a marine biologist who took part in the original rescue.

A humpback whale, freed from a drift net by divers on May 20 off the island of Mallorca, has been found dead on a Spanish beach.

“We would have caused more injuries and made its condition worse, and it would possibly have been back on the sand the next day,” Jose Luis Crespo, head of conservation at the Oceanography Foundation, said in a statement, explaining the decision not to try to return the whale to the sea.

Nicknamed “Walls of Death” because of the amount of other sea life they catch in addition to the fish they are set for, drift nets were banned by the United Nations 30 years ago.

“These nets have been illegal for three decades. They do not target anything but just capture everything. I hope this opens people’s eyes to the damage they are causing to the oceans,” Torras, owner of the Albatros diving centre in Mallorca, told Reuters.

Marine biologist and diver Gigi Torras describes the feeling of being under water, beside a trapped humpback whale, working with colleagues to cut away the tangled fishing nets that trapped the 12-metre long mammal.