Huge new ichthyosaur, one of the largest animals ever, uncovered high in the Alps 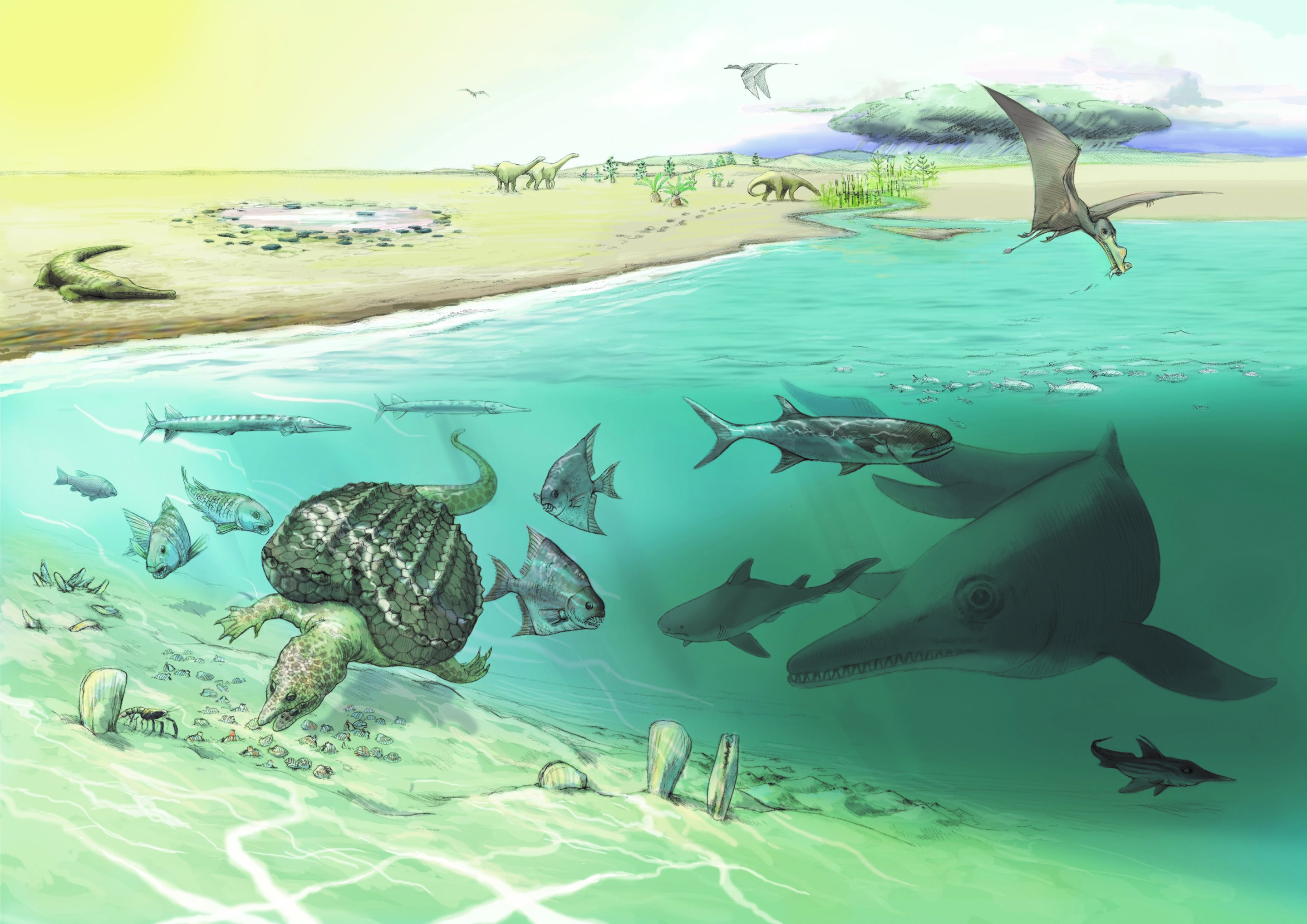 
Paleontologists have discovered sets of fossils representing three new ichthyosaurs that may have been among the largest animals to have ever lived, reports a new paper in the peer-reviewed Journal of Vertebrate Paleontology.

Unearthed in the Swiss Alps between 1976 and 1990, the discovery includes the largest ichthyosaur tooth ever found. The width of the tooth root is twice as large as any aquatic reptile known, the previous largest belonging to a 15-meter-long ichthyosaur.

Dr. Heinz Furrer, who co-authors this study, was among a team who recovered the fossils during geological mapping in the Kössen Formation of the Alps. More than 200 million years before, the rock layers still covered the seafloor. With the folding of the Alps, however, they had ended up at an altitude of 2,800 meters.

Now a retired curator at the University of Zurich’s Paleontological Institute and Museum, Dr. Furrer said he was delighted to have uncovered “the world’s longest ichthyosaur; with the thickest tooth found to date and the largest trunk vertebra in Europe.”

And lead author P. Martin Sandler, of the University of Bonn, hopes “maybe there are more remains of the giant sea creatures hidden beneath the glaciers.”

“Bigger is always better,” he says. “There are distinct selective advantages to large body size. Life will go there if it can. There were only three animal groups that had masses greater than 10-20 metric tons: long-necked dinosaurs (sauropods); whales; and the giant ichthyosaurs of the Triassic.”

These monstrous, 80-ton reptiles patrolled Panthalassa, the world’s ocean surrounding the supercontinent Pangaea during the Late Triassic, about 205 million years ago. They also made forays into the shallow seas of the Tethys on the eastern side of Pangaea, as shown by the new finds.

Ichthyosaurs first emerged in the wake of the Permian extinction some 250 million years ago, when some 95 percent of marine species died out. The group reached its greatest diversity in the Middle Triassic and a few species persisted into the Cretaceous. Most were much smaller than S. sikanniensis and the similarly-sized species described in the paper.

Roughly the shape of contemporary whales, ichthyosaurs had elongated bodies and erect tail fins. Fossils are concentrated in North America and Europe, but ichthyosaurs have also been found in South America, Asia, and Australia. Giant species have mostly been unearthed in North America, with scanty finds from the Himalaya and New Caledonia, so the discovery of further behemoths in Switzerland represents an expansion of their known range.

However, so little is known about these giants that there are mere ghosts. Tantalizing evidence from the UK, consisting of an enormous toothless jaw bone, and from New Zealand suggest that some of them were the size of blue whales. An 1878 paper credibly describes an ichthyosaur vertebrae 45 cm in diameter from there, but the fossil never made it to London and may have been lost at sea. Sander notes that “it amounts to a major embarrassment for paleontology that we know so little about these giant ichthyosaurs despite the extraordinary size of their fossils. We hope to rise to this challenge and find new and better fossils soon.”

These new specimens probably represent the last of the leviathans. “In Nevada, we see the beginnings of true giants, and in the Alps the end,” says Sander, who also co-authored a paper last year about an early giant ichthyosaur from Nevada’s Fossil Hill. “Only the medium-to-large-sized dolphin- and orca-like forms survived into the Jurassic.”

While the smaller ichthyosaurs typically had teeth, most of the known gigantic species appear to have been toothless. One hypothesis suggests that rather than grasping their prey, they fed by suction. “The bulk feeders among the giants must have fed on cephalopods. The ones with teeth likely feed on smaller ichthyosaurs and large fish,” Sander suggests.

The tooth described by the paper is only the second instance of a giant ichthyosaur with teeth—the other being the 15-meter-long Himalayasaurus. These species likely occupied similar ecological roles to modern sperm whales and killer whales. Indeed, the teeth are curved inwards like those of their mammalian successors, indicating a grasping mode of feeding conducive to capturing prey such as giant squid.

“It is hard to say if the tooth is from a large ichthyosaur with giant teeth or from a giant ichthyosaur with average-sized teeth,” Sander wryly acknowledges. Because the tooth described in the paper was broken off at the crown, the authors were not able to confidently assign it to a particular taxon. Still, a peculiarity of dental anatomy allowed the researchers to identify it as belonging to an ichthyosaur.

“Ichthyosaurs have a feature in their teeth that is nearly unique among reptiles: the infolding of the dentin in the roots of their teeth,” explains Sander. “The only other group to show this are monitor lizards.”

The two sets of skeletal remains, which consist of a vertebrae and ten rib fragments, and seven asssociated vertebrae, have been assigned to the family Shastasauridae, which contains the giants Shastasaurus, Shonisaurus, and Himalayasaurus. Comparison of the vertebrae from one set suggests that they may have been the same size or slightly smaller than those of S. sikkanniensis. These measurements are slightly skewed by the fact that the fossils have been tectonically deformed—that is, they have literally been squashed by the movements of the tectonic plates whose collision led to their movement from a former sea floor to the top of a mountain.

Known as the Kössen Formation, the rocks from which these fossils derive were once at the bottom of a shallow coastal area—a very wide lagoon or shallow basin.

This adds to the uncertainty surrounding the habits of these animals, whose size indicates their suitability to deeper reaches of the ocean. “We think that the big ichthyosaurs followed schools of fish into the lagoon. The fossils may also derive from strays that died there,” suggests Furrer.

“You have to be kind of a mountain goat to access the relevant beds,” Sander laughs. “They have the vexing property of not occurring below about 8,000 feet, way above the treeline.”

“At 95 million years ago, the northeastern part of Gondwana, the African plate (which the Kössen Formation was part of), started to push against the European plate, ending with the formation of the very complex piles of different rock units (called ‘nappes’) in the Alpine orogeny at about 30-40 million years ago,” relates Furrer. So it is that these intrepid researchers found themselves picking through the frozen rocks of the Alps and hauling pieces of ancient marine monsters nearly down to sea level once again for entry into the scientific record.

Citation:
Huge new ichthyosaur, one of the largest animals ever, uncovered high in the Alps (2022, April 28)
retrieved 29 April 2022
from https://phys.org/news/2022-04-huge-ichthyosaur-largest-animals-uncovered.html

"We are very pleased to have obtained this...
Read more
Previous articleHibernating bats have similar metabolism to that of hibernating bears
Next articleStories about economic degrowth help fight climate change — and yield a host of other benefits