How climate change, construction can weaken trees and cause severe storm damage 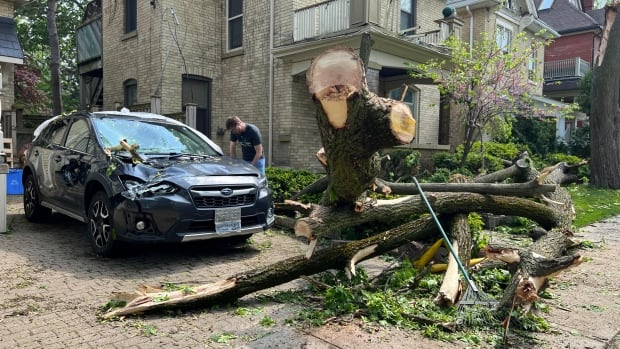 Uprooted trees and snapped branches damaged cars, homes, property. In Ontario, nine of the ten people killed by the storm, and its aftermath, died from being struck by felled trees or tree limbs. In one case, a woman in Brant county died when a tree fell on her camping trailer.

A climate expert said trees weakened by climate change conditions and infrastructure projects may be partly to blame for the scale of the damage.

“Extreme heat and drought conditions can have an impact on tree growth … and can encourage shallow root systems as trees try and make the most of rainfall on the surface,” said Joanna Eyquem, managing director of climate-resilient infrastructure at the Intact Centre on Climate Adaptation at the University of Waterloo.

She said rising temperatures have also created ideal conditions for tree diseases like the emerald ash borer to thrive.

“If our trees are less healthy, we’re more likely to have dead branches, or trees that are more unstable … So when we see high winds … those unstable trees can fall and … branches can blow off,” she said.

A spokesperson with the City of Kitchener said developers and contractors are obligated to work around trees and follow a high standard of tree protection.

“When work takes place within the drip line of a tree, it is done with careful planning and protective measures to minimize tree and root damage,” a spokesperson said in a statement to CBC News.

Jamie Croft, manager of infrastructure engineering with the City of Cambridge, said the city, like others, encourages trenchless technologies, which avoids excavation.

“The city is aware that root damage within the dripline of a tree contributes to weakened trees and takes the necessary precautions for the protection of trees,” said Croft in an emailed statement.

A City of Waterloo spokesperson said that city avoids running utilities and other infrastructure near mature trees whenever possible. If that’s not possible, then protection measures are outlined in each contract.

“Trees that are unhealthy or would be too unstable following construction may be removed. When possible, trenchless work is done to minimize damage to root systems of mature trees,” said a spokesperson.

Meanwhile, Eyquem said municipalities can take proactive measures to better prepare for future storms, including boosting tree canopy targets and managing trees as if they were assets, such as building infrastructure.

“Long-term planning and investments,” she said.

The Morning Edition – K-W5:01Poor tree health, infrastructure projects may have contributed to the damage from Saturday’s severe storm

Saturday’s devastating storm and strong winds left downed trees and branches across Waterloo region and Guelph. While the scale of the damage is still being calculated, Joanna Eyquem from Climate-Resilient Infrastructure at the Intact Centre on Climate Adaptation at the University of Waterloo, explains how climate change and infrastructure maintenance may be partly to blame.

Age Hammeken Danielsen has hunted narwhals since he...
Read more
Previous articleNuclear power: Do we need it to combat climate change?
Next articleAstrophysics student discovers link between global warming and locally unstable weather